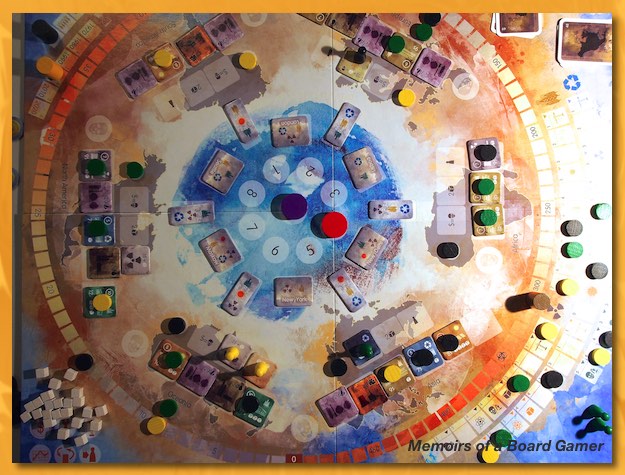 At a recent game night, I had a chance to play one of my favorite games, CO2. I don’t get a chance to play it very often but we have a core group that looks for opportunities to break it out and we don’t hold back at making the suggestion to play when the situation arises.

Unfortunately, it can be many months between plays so we usually have to have a quick rules refresher and need to remind ourselves about the tricky handling of CEPs (Carbon Emission Permits) in and out of the market, how the UN Cards work, what happens when scientists get kicked off projects, minimum requirements to build specific power plants, etc. But, over the years, we’re getting better at remembering the nuances and more quickly progressing to actual play.

In the 1970s, the governments of the world faced unprecedented demand for energy, and polluting power plants were built everywhere in order to meet that demand. Year after year, the pollution they generate increases, and nobody has done anything to reduce it. Now, the impact of this pollution has become too great, and humanity is starting to realize that we must meet our energy demands through clean sources of energy. Companies with expertise in clean, sustainable energy are called in to propose projects that will provide the required energy without polluting the environment. Regional governments are eager to fund these projects, and to invest in their implementation.

If the pollution isn’t stopped, it’s game over for all of us.

In the game CO₂, each player is the CEO of an energy company responding to government requests for new, green power plants. The goal is to stop the increase of pollution, while meeting the rising demand for sustainable energy — and of course profiting from doing so. You will need enough expertise, money, and resources to build these clean power plants. Energy summits will promote global awareness, and allow companies to share a little of their expertise, while learning still more from others.

In CO₂, each region starts with a certain number of Carbon Emissions Permits (CEPs) at its disposal. These CEPs are granted by the United Nations, and they must be spent whenever the region needs to install the energy infrastructure for a project, or to construct a fossil fuel power plant. CEPs can be bought and sold on a market, and their price fluctuates throughout the game. You will want to try to maintain control over the CEPs.

Money, CEPs, Green Power Plants that you’ve built, UN Goals you’ve completed, Company Goals you’ve met, and Expertise you’ve gained all give you Victory Points (VPs), which represent your Company’s reputation – and having the best reputation is the goal of the game … in addition to saving the planet, of course.

When the game came out in 2012, it was easy to locate forum entries on BGG with topics concerning the game’s theme and its focus on “fictitious” concepts like “global warming”. How ridiculous that games about elves, trolls, gods, etc. didn’t get subjected to the same treatment. Thankfully, those forum entries are now rare and hopefully we all can work together to address our real and increasingly negative impact on our environment. 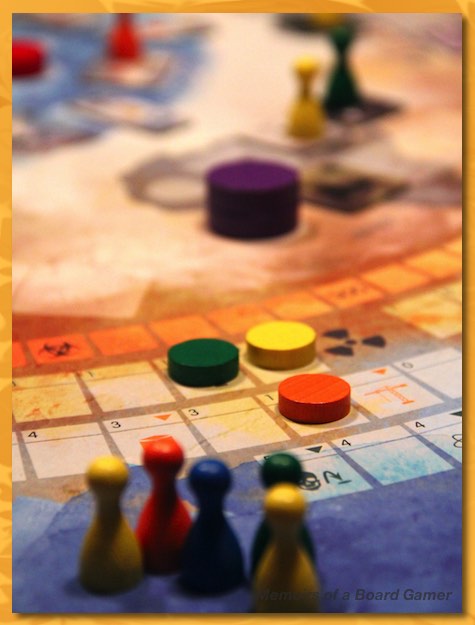 Like the Gallerist, Vital Lacerda’s CO₂ design features a “kick-out” mechanism where players can choose to place a worker (in this case a scientist) on a location to take an action but during another player’s action that worker can be kicked off the location so that the other player can take an action. The kicked-out player gets a benefit for being removed from the spot and, at times, you can take advantage of this timely special action.

I like CO₂ for its theme and how the rules strongly tie to real world activities companies and scientists might take that it seems to really click for me. I also really like the twist that if players focus solely on taking actions that only benefit the company they represent (in the short term) and ignore the impacts (or lack thereof) of those actions to the environment, the game can come to a crashing halt and everybody loses due to a crashed earth. The ability to capitalize on building a power plant that another player has worked so hard at designing and developing is simply ingenious.

And to top it all off, the artwork is simply beautiful. I hope my images showcase that beauty and help to encourage you to take a hard look at CO₂.