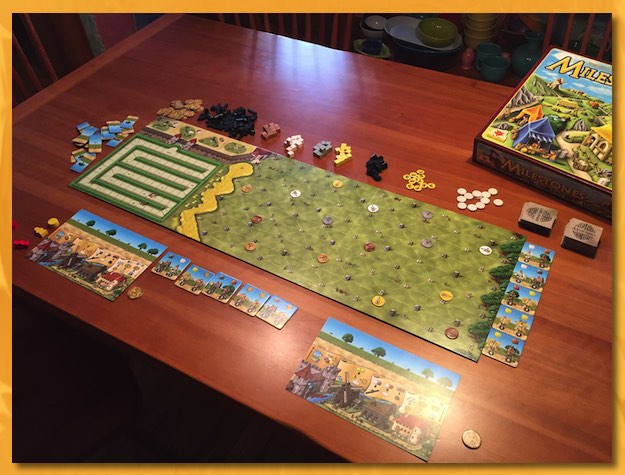 Two years ago, when I attended BGG.CON, one of the free games I picked up was Milestones. I didn’t think much about it at the time and in fact, it sat on my shelf for over a year, still in shrink. Last weekend I decided to pull it out and see if it was any good and I was pleasantly surprised.

It’s not an awesome game but it’s got enough little things going on that it’s really a pretty neat, engaging game, especially for two. When Lisa and I played, it felt like it was almost always my turn and featured a hint of that tension of wanting to try to capitalize on what moves your opponents were going to make. 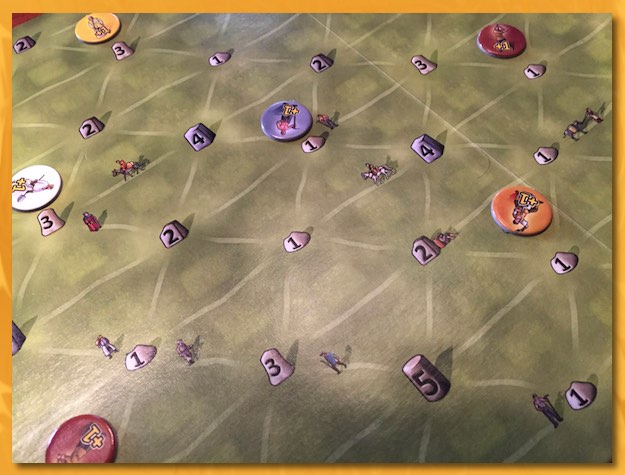 When you set up the game you randomly assign special bonus tokens to various points on the board (these can be earned throughout the game) and then players take turns trying to gain points by building roads, houses, markets, and other items throughout the board. 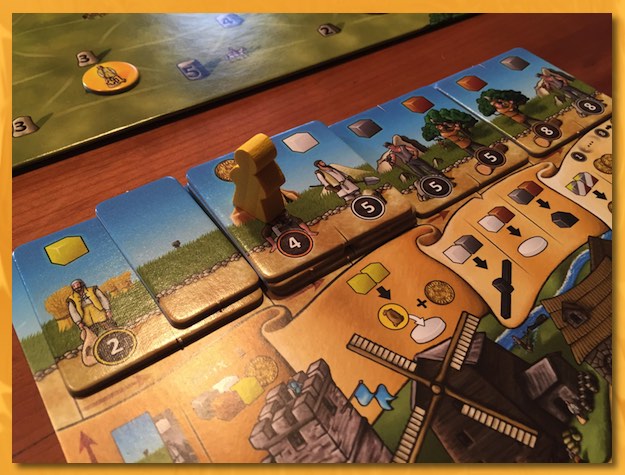 Each player has a personal tableau and a worker meeple that walks in a clockwise circle around the tableau activating actions on what effectively acts like a rondel. However, unlike many rondel games with a fixed action set, your personal rondel features a top row of actions that change over the course of the game. Across the top row, actions allow player to gather goods and then when traversing the bottom of the rondel, actions allow players to spend those goods to build items on the board. 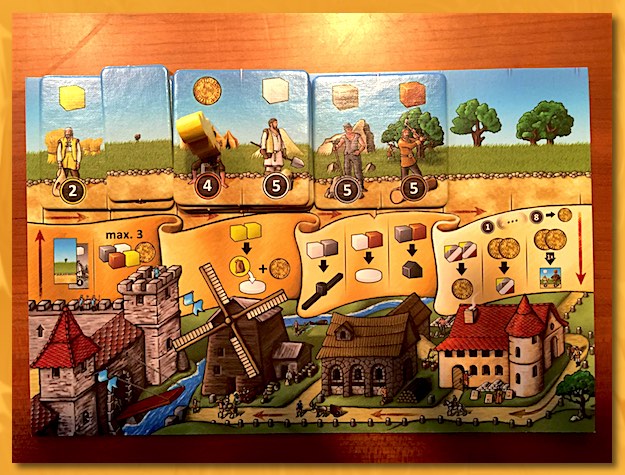 You can travel as far as you want on the rondel with no penalty but you must stop on the lower left corner every time around and on that action space, things get interesting. The ruthless king requires you to donate one of your top row workers to the castle (you cover him up with a small rectangular tile just to the left of the meeple) effectively removing the worker from the game. If that wasn’t enough, the king taxes players restricting them from carrying no more than three goods into the next trip around the rondel. After a few rounds you’ll find yourself with a much decreased capacity to fund your building habit and you’ll need to work towards buying more worker tiles for your rondel.  Those worker tiles are chosen from a small supply of face-up tiles and can be placed on top of any of your workers (or “dead spaces”) on your rondel.

There are additional rules regarding the numeric order of the tiles from left to right as well as what goods they produce, how those good pay out when you stop on them, and how the special bonus tiles from the board pay out. All these rules keep your tile choices interesting.

Lisa and I really enjoyed the game. It’s easy to teach and we both enjoyed the switch between trying to efficiently curate one’s rondel while also timing the placement of built goods to maximize points. What a great game for the amount of time it takes. Nicely done!