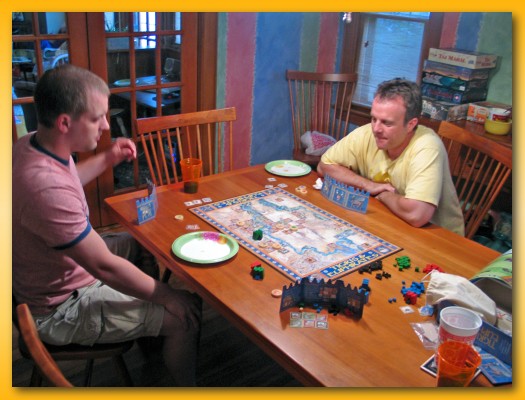 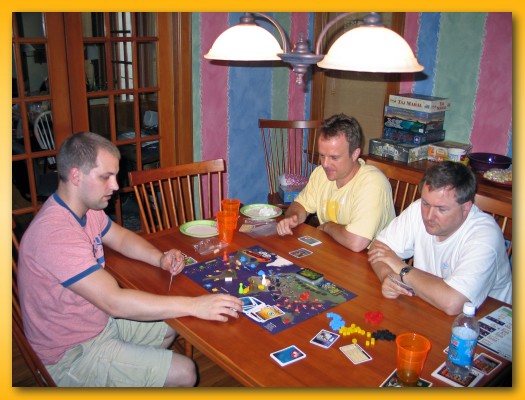 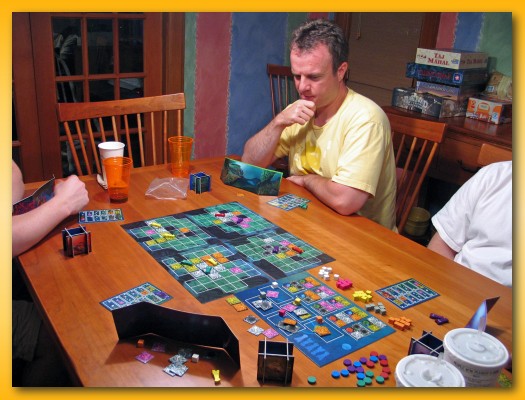 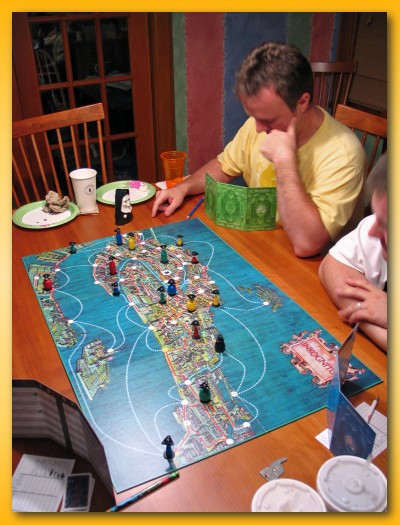 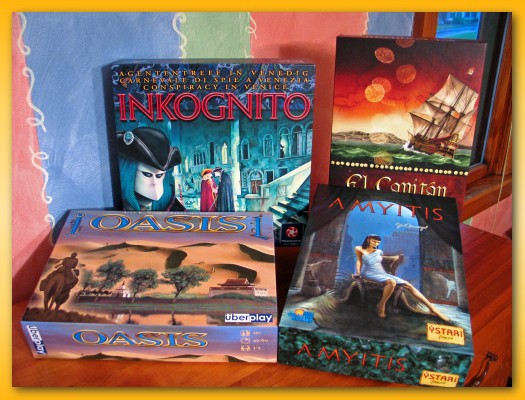 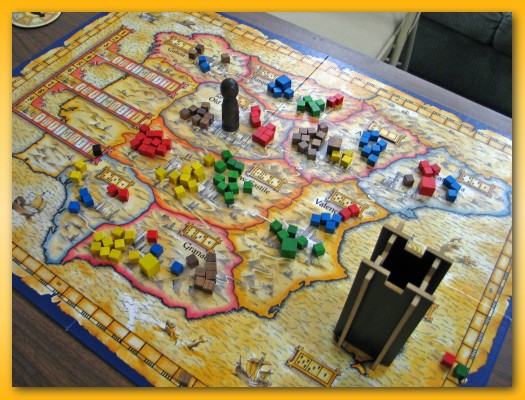 My opportunities for gaming have been pretty slim lately so I was happy for June AGN to arrive. Paul was gracious enough to host so Paul, thanks for that. Your wife gave me the, “what a weirdo” look and asked “you’re taking pictures of a board game?” but phooey on her…what does she know.

Tim, our fifth, was going to be arriving late so we started with Zooloretto for four. Rich has owned a copy for quite awhile but I’ve just never had the opportunity to play it. Zooloretto is a light filler but not mindless. Like its parent game Coloretto, players place tiles drawn from a pile into groups, the trucks, in the middle of the table. The tiles represent vendor stalls, various animals, and money. Players can draw and place a tile, take a truck (along with it’s tiles), or execute a monetary action. Rinse, lather, and repeat until the game ends and the player with the most points after the scoring wins.

The goal is to gather trucks holding vendor stalls, animals, and money such that you can place the animals in exhibits in your personal playing area (the zoo). Exhibit space is limited and only one kind of animal can exist in single exhbit at a time. You’re trying to fill all of the exhibit spots with the correct number of animals (no less and no more) to maximize points. Vendor stalls mitigate risk of not filling an exhibit space and provide additional points at the game end. Money is used to execute monetary actions while you’re still in the round before you’ve taken a truck. Some additional rules further deepen (complicate?) the game such as: you can buy one additional exhibit space, you can use the barn in your zoo as ‘swing’ space if you need to restructure your exhibits, you can ‘purchase’ an animal from somebody else’s barn, etc. If you like Coloretto you’ll be very comfortable playing Zooloretto. It’s a slightly deeper experience but by no means brain burning.

I started to teach Tichu but before we got started, Tim arrived and we settled on an oldie but a goodie, El Grande. I went looking back in the blog and found that the last time we played El Grande was the November AGN in 2004! I’ll not go into details but suffice it to say that I did so poorly that I can hardly stomach the thought of it. It’s been long enough since I’ve played that the chaos factor of the action cards continually caught me off-guard. You can be so devastated by how those cards are played by your opponents. I repeatedly felt stuck in the situation where I wanted to go early in the round to get a sweet card yet if I went early I’d just leave the door open for a later card to sweep in and negate my move.

I’m finding that when I do poorly in an area control game, whether it’s Mission: Red Planet, Mexica, Tikal, El Grande, etc., I’ve consistently done a poor at choosing my opponents. My biggest fault is choosing to fight too many different opponents simultaneously. I end up getting ‘picked on’ from all players weakening my position on all fronts. If I instead, focussed on only fighting a select few opponents then some will ignore me allowing me more resources to strengthen my position. It seems pretty obvious but I consistently fail at recognizing that I’ve done it yet again.

I’d not remembered the chaotic back-stabbing romp that makes up El Grande but it is a good game. It’s a shame that it has taken us 3.5 years to play it again. I’d like to play it again soon and I promise to myself to choose my battles more wisely.