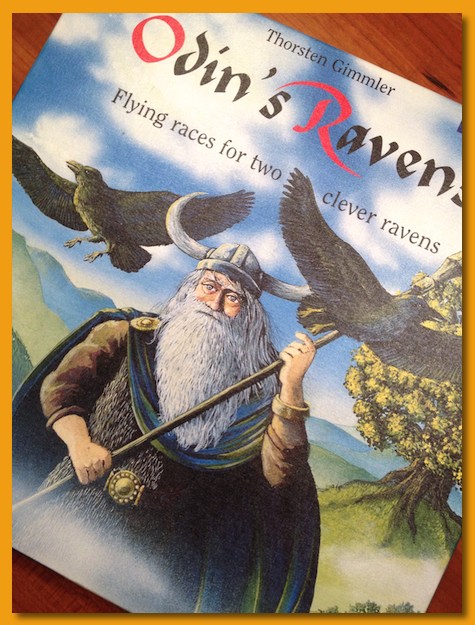 About five years ago I ran across one of the Kosmos two-player games called Odin’s Ravens and was intrigued by its high rank and passionate following. At 6.7 on BGG, it seemed like a solid game worth tracking down. I’m always looking for strong two-player games so I started looking but had trouble finding a copy. Published in 2002 by Thorsten Gimmler, there just weren’t that many copies available and those that were out there were being held onto strongly.

I’d never obtained a copy but still had it on my wantlist. The prices started rising and I figured I’d not see a copy any time soon. Fast-forward to Great Lakes Games earlier this month and when my name was called a second time for the prize table, there was a nearly pristine copy sitting there and I rushed the table and grabbed it. Prices are all over the map from $40-$150 for a copy but I wanted it to play!

This weekend Lisa and I opened it up and played several games and I have to admit, it lives up to its rating. The game is light enough that you can talk and sip tea while playing but there’s enough strategic and tactical options available to keep gamers engaged. 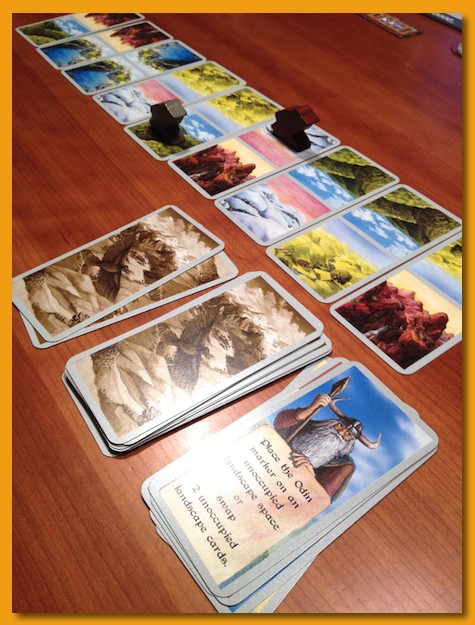 The game is composed of several mini-games (races) ending when one player reaches at least 12 points. Each race is a complete mini-game and only the points are carried forward to the next race. At the begin of each race, nine landscape cards are dealt out in a line establishing the terrains over which players will attempt to advance their ravens. 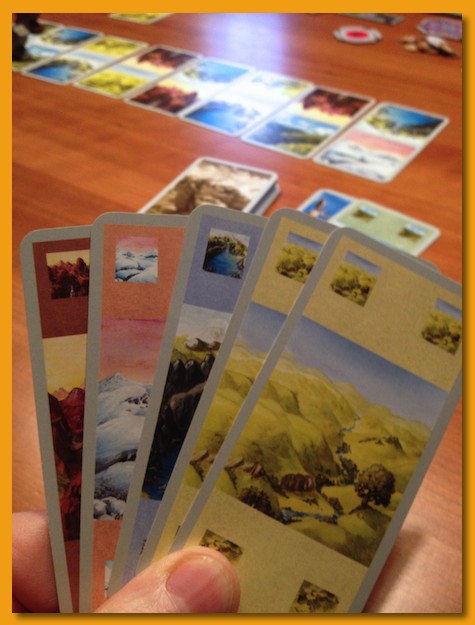 Each player has a hand or five cards drawn from a personal deck (each player starts with the same cards in their deck). Each card depicts a single terrain type and players attempt to play cards from their hand and from an auxiliary deck (built from previous turns). Terrain cards that match the terrain card in front of their raven, advance the raven. The personal deck also contains Odin cards which have some rule-breaker text on them that allows players to swap terrain tiles, rotate them, move ravens forward or back, or otherwise mess with the other player. Players also, during the race, have a chance to extend the length of the race by adding cards to the end of the track. 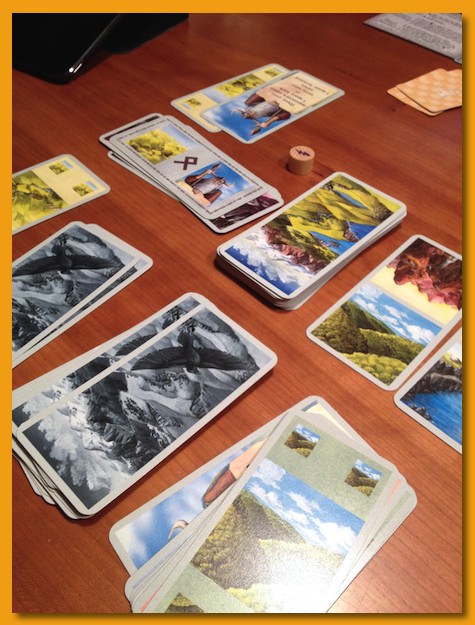 In addition to the ravens flight, players can play cards to another area of the table (the Magic Way) depicting two valid terrain types (or the Odin card) and at the end of the race (triggered by the first player to advance their raven to the end of the track) players earn points for having played the most cards to the Magic Way and for the distance (in terrain cards) between the two ravens.

Odin’s Ravens is a great game for us. It’s small, packaged in the standard two-player Kosmos square/flat box, light, and easy packs for road trips. And most of all, it packs a lot of game in just a few cards. If you get a chance, try to pick up a copy or at least play it a few times. You’ll not regret it.