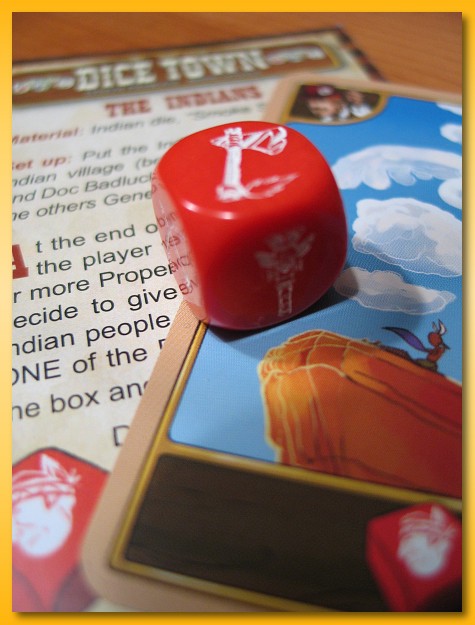 I traded away a copy of Red November for a copy of Dice Town: The Indians. I really didn’t like Red November and would have taken a box of dirt for it but as luck would have it, I got an awesome trade offer for a relatively rare expansion to one of my favorite games, Dice Town. The Indians expansion is composed of a single General Store card and a custom die. Not much, granted, but the collector in me really wanted it (only about 100 people claim to own it on BGG) and I thought it might spice up the game a bit. The die is optionally taken by the player that won the best poker hand but can only be taken if they opt out of one of the cards they won that round (the card is out of the game). Then, just before the gold nuggets are paid out for 9’s the following round, the player rolls the die and gets to cough up some chaos depending on which side of the die is face up. There are four options: Shaman’s blessing (2) – Flip one of your own die to a side of your choice, Ambush (2) – Force an opponent to reroll a die of your choosing, Warpath (1) – Put the die on a location preventing it from paying out this round, and Bodyguard (1) – Prevents you from being robbed by the Queens this round. The General store card allows the owning player to steal the Indian die just before the beginning of the following turn. 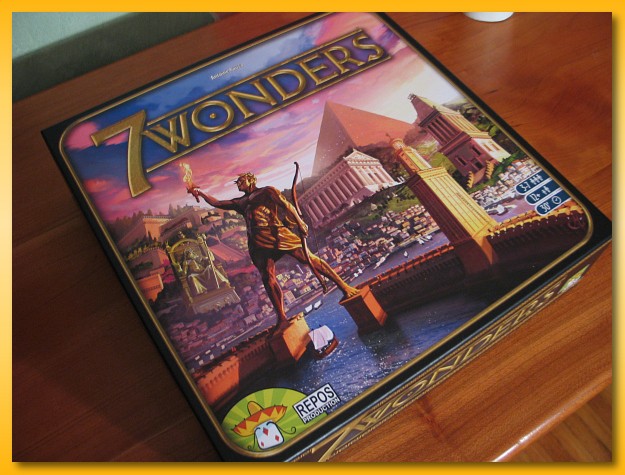 And….my preordered copy of 7 Wonders arrived today. I’m really looking forward to playing this again after the fun I had playing it at Great Lakes Games 2010.