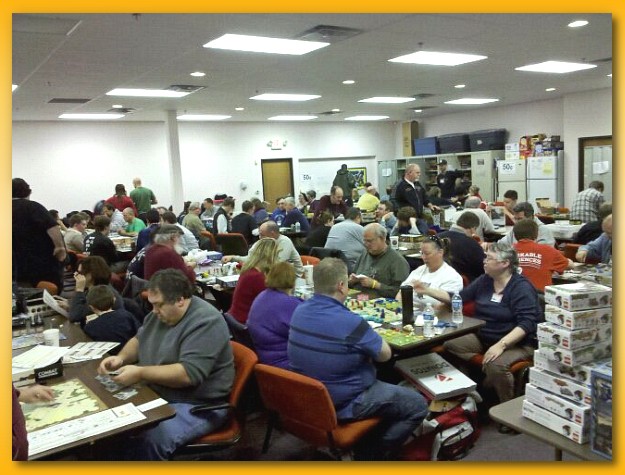 The Columbus Area Boardgaming Society (CABS), besides meeting several times each month, sponsors a special After Turkey Day board gaming event. Lisa and I had attended the CABS 2009 After Turkey Day event and were looking forward to it again this year. We arrived around 11:30 and spent roughly 12 hours playing games in a packed house. At the peak, there were probably 125 people crammed in the event room playing games shoulder to shoulder at the tables. While walking to the car, Lisa said she couldn’t believe we spent 12 hours playing games. She went on to say that when you play games like that with friends it just goes so fast! Pretty much sums it for me too. This year was a special 48 straight hours of games running from 6am Friday morning to 6am Sunday morning but unfortunately we could only attend for those 12 hours. Maybe next year! 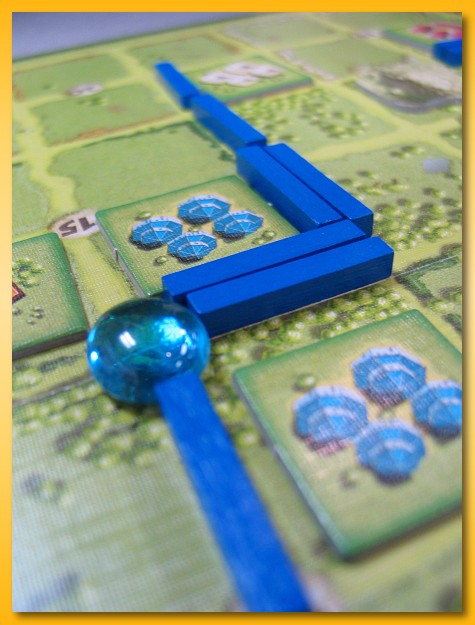 We played two games of Aquädukt. This was my first time at this nice little, family-style, tile laying game. Players are trying to lay down tiles and make sure they “get watered” from the canals built from one of the five wells that get placed in the game. The game goes very fast and can be over before you know it and, surprisingly, has a relatively high degree of cut-throat take that built into the mechanics. Nice filler. 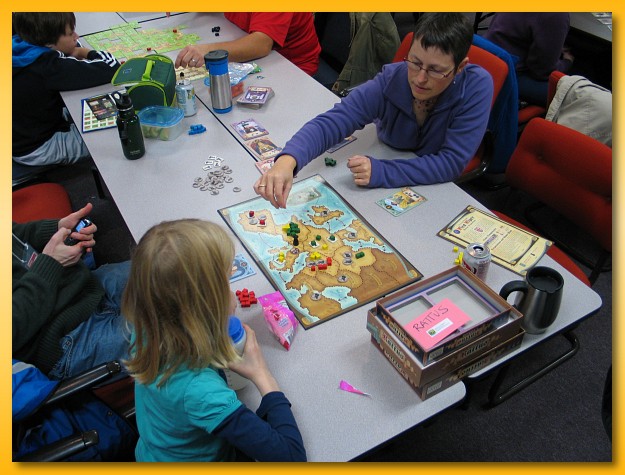 I finally was able to crack the shrink on my Rattus: The Pied Piper Expansion and we took in a game playing with a few of the expansion cards. We chose to randomize the new cards with the old cards choosing one at random from each “class”. Those potion tiles sure come in handy!

I, unfortunately, forgot to take a picture but I did get to introduce a couple of new players to Dice Town. This game has become my go-to game for family fun. It’s easy to learn, easy to teach, and most people really enjoy the rattling of the dice and the excitement of revealing your rolls. It has just the right mix of take that with the stealing of cards, bribing the sheriff, and the offensive General Store cards. Fun stuff in a fast-paced game.

We played three or four rounds of No Thanks!, a great little card game from way back in 2004. I’d recently picked up a copy as a filler for light game gatherings and this game really fits the bill. Another great game where you can play as many or as few games as you like depending on the time you have to fill. An amazing feat for a few cards and some plastic chips. 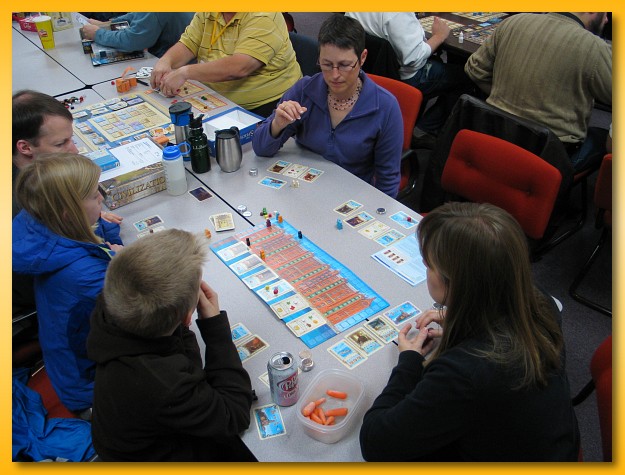 I taught The Speicherstadt to four other players and we had a ball working through the meeple bidding and the cube shipping. Money is so tight in the game and I got creamed by the lack of fireman when the fires hit. Great game! 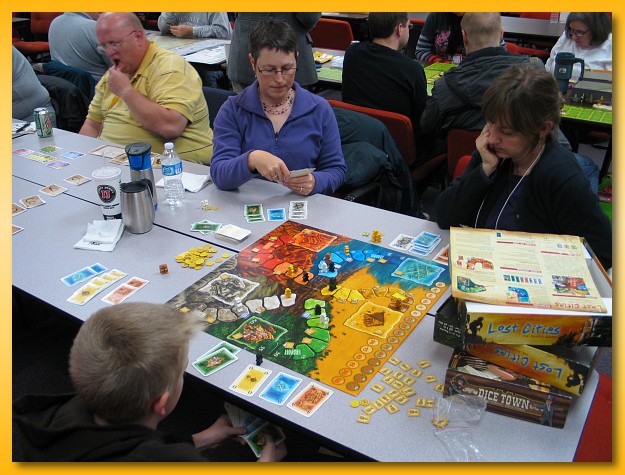 Next up was Lost Cities: The Board Game. Lisa and I had, in the past, played the heck out of our copy of Lost Cities the card game but I was happy to be taught the board game version. I was very pleasantly surprised. The added treasure hunting, “steps”, and point tokens that you find along the various paths add a bit more strategic depth to what had become a relatively mechanical card game. It seems harder to get stuck in this game but there are still those moments when you’ve got to make some big decisions about how many numbers to skip when moving your explorer along the path. I wouldn’t mind owning a copy for a nice family game. 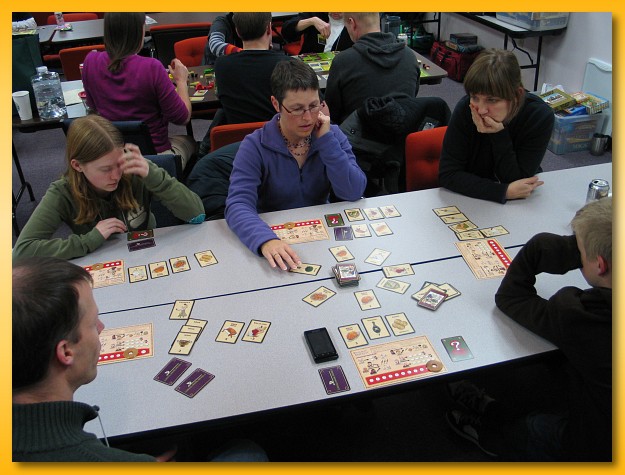 Next up was Bacchus’ Banquet a weird card drafting game of deduction. Each player represents a secretly held identity and is driving to collect cards in kind appropriate to their hidden role. A player with initiative grabs three cards from the ring of cards on the table, keeps one, discards one, and gives the third to one of the players. This “gift” can be rejected (without looking at it) by passing it to another player. This continues until someone accepts the card or it makes its way back to the originating player who must accept it. Each player has 10 points of “waistline” in which to meet their goal of eating food and drinking wine and most cards cause an increase in the level before hitting 10 and becoming incapacitated. Many cards cause your level indicator to be reduced or grow and the numerous “bad” cards and other “special” cards keep it interesting. I didn’t like the game very much though. If nobody passes you a card you’re pretty much sitting there doing nothing. The only way to get initiative is to accept a gift so there was a fair amount of down time (for me any way). Our group had a lot of issues with the ambiguous text on many of the specialty cards and one-time use hidden special card everybody gets at the beginning of the game. I’m always up for learning a new game and I’m glad I got to play it though. 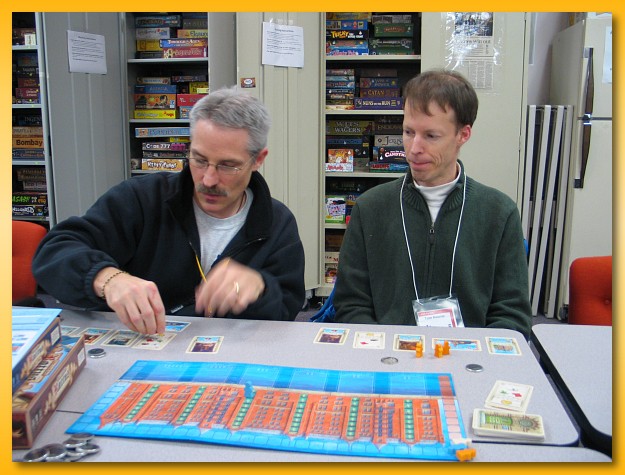 To close the night, Lisa and I got in another game of The Speicherstadt, this time with three. I’ve played twice with five and once with three and I suspect that four is the sweet spot. The game is very different with three than with five, three feeling a bit prescribed and five a bit chaotic. However, it’s definitely fun without that feeling of it breaking down at the edges like many games.

Well, another Turkey Day down and a lot of games and fun packed into a surprisingly short day. What’s funny, is we gamed with pretty much the same group the entire time and there’s no reason we couldn’t have that same gaming day experience several times a year. All it takes would be some organization and taking time from our ridiculously busy lives. We should take some time off to smell the roses, or cardboard as the case may be.