First off…sorry for the late posting on my CABS meeting last night. It just wasn’t in me to start a posting after getting home at 1:30am. This morning I had to help out with coaching Sophie’s fast-pitch softball team and get Noah down for his baseball practice.

I arrived a little late last night to a packed house of gamers. The CABS meeting space at New Market Mall is coming to a close and they’re looking for another place that can support 100+ gamers two to three times a month. I returned the copy of Carolus Magnus I had checked out from the library and since it looks like I might have to wait to get plugged into a game, I dug through the library cabinets looking for a good game to introduce to the kids. I settled on Fossil since I had vague memories of it being good for kids and adults but that it was one of those games you either like or hate. My plans are to try to give it a shot this afternoon if I can get Sophie to clean her room… 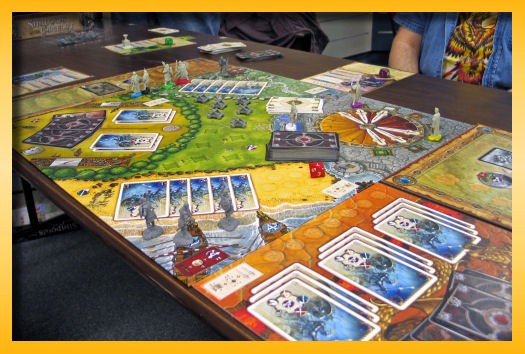 Jeff Wolfe was involved with a game of Shadows Over Camelot and they needed another player to fill out the roster so I jumped in for my first play of the game. Shadows is a cooperative game where everyone is assigned the role of a knight and you work together to win quests, fight battles & dragons, and search for the Holy Grail. The game is full of negotiation as you work together to defeat the game. On each turn, you must play out the game’s event which ranges from laying siege engines near the castle to drawing and playing a ‘bad’ black card. After playing the game’s turn you play out your heroic action in an attempt to help your fellow knights to victory. 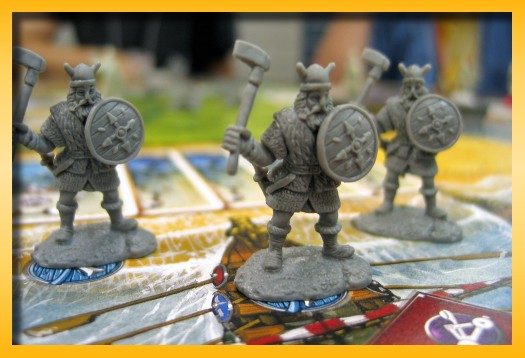 You heroic action might include battling invading armies, destroying siege engines, fighting a dragon, attempting to recover Excalibur, etc. As you play, you’re always looking for ways to aid your fellow knights but you have to be careful because there may be a traitor among you. The traitor is a knight, chosen at random, who is trying to sabotage the game without being obvious about it. He must try to appear as if he’s helping out but his real goal is for the other knights to lose. As luck would have it, I was chosen as the traitor which is difficult on your first playing of the game. In the end, the game was won by the other knights but I also was not revealed as the traitor and I came very close to purposefully revealing my role late in the game by making a false accusation of another knight but the siege engine count fell back to low for me to make my move.

Shadows was my first playing of a cooperative game like that. I was left with a mediocre feeling. I’m not sure if it’s just not what I was expecting or that I went into the game with the mindset that I wouldn’t like because of what I’d read on BGG. I’m glad I played though and I like to keep an open mind. With most games though, I’m willing to play several times before making any rash decisions. 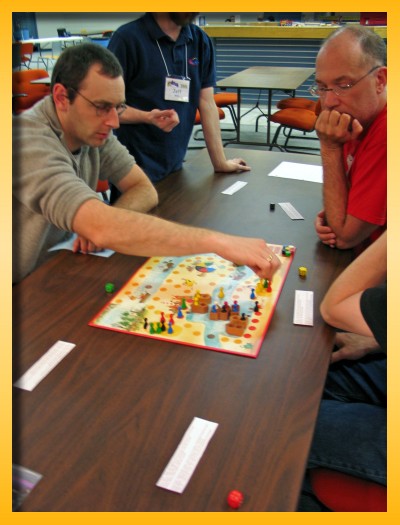 Next up was Flußpiraten designed by Walter Müller and Klaus Zoch. Flußpiraten is an odd cookie. The game is themed as a pirate game in name only. The play and even the artwork is not very piratey. Your job, as one of the colored groups of pawns, is to jump in boats and sail up the river to the end where you score points based on the position of a rotating color wheel. 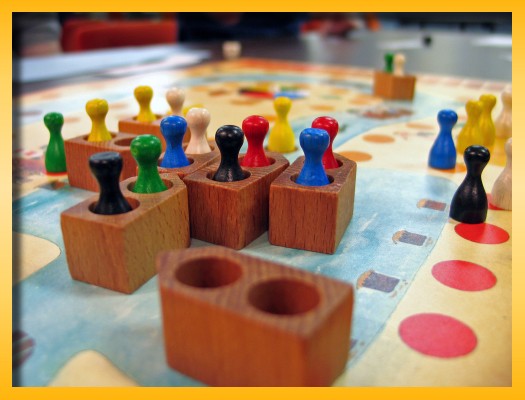 On your turn you decide to either move one pawn or attempt to move a boat. If you move a pawn, you roll a single D6 and move one pawn that exact number of positions. You can only enter the boats from the docks in the harbor or from a few special spots in the middle of the river. When you’re in the river, you have the opportunity to jump into a boat with only one passenger if it lands on the spot where you’re standing.

If you attempt to move a boat, the two players represented by the pawns in the boat perform a rock/paper/scissors move by placing one of three items in their hand (a D6, nothing, or a small stick representing a club). You each secretly choose the item and then expose it simultaneously. There is a little chart that depicts all of the pay outs. Depending on who chooses what you may get kicked out of the boat, you might be able to sail forward (if you roll an odd number), etc. In this fashion you cooperate (or not) to move the boat up river towards the end. Boats can drift backwards in the current and there is always a cut throat aspect to trying to score by yourself by kicking people out of the boat unless you can guarantee that they’re not a threat on the scoring chart.

I felt the game was overly long for what you get out of it and with 6 you really have to keep the game moving as it does bog down.