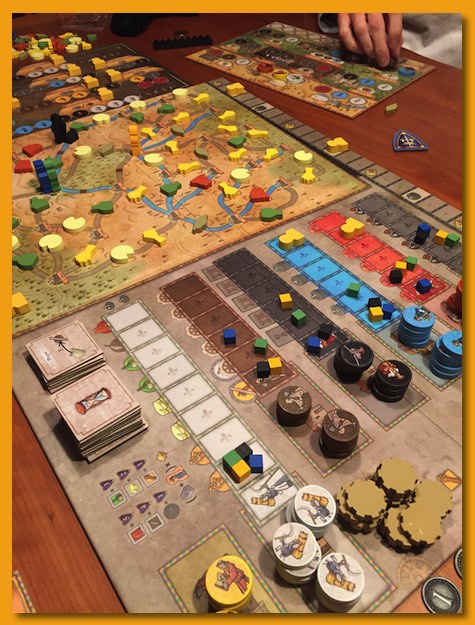 Orléans: Deluxe Edition has been hitting the table a lot with my group. That’s pretty rare, for us, granting the game a relatively vaulted position. Some of the best praise I’ve heard is, “Every time I play it, I do worse which just makes we want to play it again!”.

We’ve been playing with a couple of incorrect rules and after digging into the forums on BGG I think I’m prepared for the next play. Things to watch out for:

When there are no more character tiles available in a given color, nobody can choose an action that would normally grant them one of those tokens.

For example, if there are no more gray Scholars in the University, nobody can activate the “Scholar” action effectively locking out regular movement up the University track until a plague manages to restore a Scholar to the board.

Players can, however, still activate Place Tiles that grant additional “books” or “technology gears”. We’d been playing that it was still possible to choose the given action and take advantage of all the benefits but just not receive a character tile. Late in the game, this is many times a welcome relief since it doesn’t muddy your bag with unwanted tiles and doesn’t prohibit a catch-up mechanism for those that waited for a given benefit. No wonder it’s not allowed!

When you receive one or more technology gears in a turn (by choosing an available Craftsman and/or activating the Laboratory) you must wait until the end of the round (after you pass) to place the gear(s) on empty locations.

This rules miss didn’t impact anything in our games but simply clears up some questions we had. We’d played correctly that placing the gear when you immediately receive it would NOT activate the space and that the space must be empty but we weren’t waiting until the end of the turn.

I’m not convinced I like the Beneficial Deeds board. It feels tacked on and nobody in our group tends to pay much attention to it until late in the game. It’s common for us to only complete 1 or 2 places. The “game of chicken” seems, to us, the inhibiting factor. If the Citizen was granted to the player with the majority of character tiles in a location, it might completely solve the issue for us. However, we don’t usually “house rule” games since doing so can dramatically change the game in ways that were never intended (I’m looking at you Monopoly).

The Deluxe version is very nicely produced but I do wish there was more of a need to use the metal coins as currency in the game. With metal tokens like that, there should be a need to fondle them more.

Thanks Reiner Stockhausen for a great game, I can’t wait for another play. Deck building by drawing tokens blindly from a bag! Nicely done!