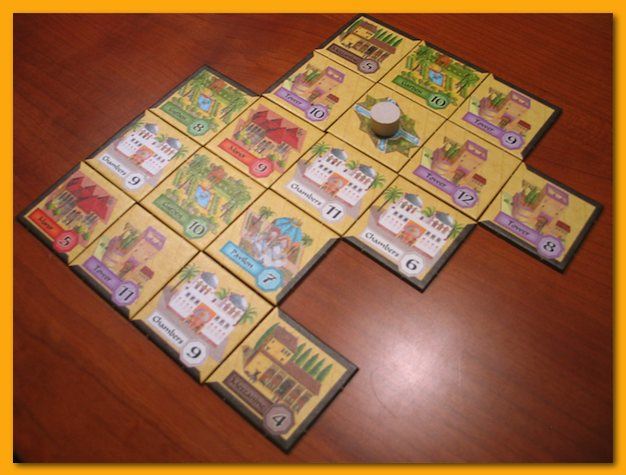 Alhambra is a 2003 title designed by Dirk Henn. I’ve owned it for years and felt it was a so-so game but after realizing I’d played it wrong, I wanted to get it back to the table. Unfortunately, the box kept getting pushed to the back of the game shelf to gather dust on its plodding journey to the trade list.

However, at a recent Great Lakes Games gathering, I had the opportunity to play it near the end of the convention and (of course playing it correctly this time) I had a great time. The game moved along faster than I remember and although there aren’t major decisions to be made, there are enough to keep it interesting. There is a place and time for real brain burners where most of the time is spent in silence analyzing the ebb and flow of strategic and tactical moves of sparring opponents but there is also a place and time for games that, rather than burn, apply a salve to the tired brain, possibly teasing out a bit more fun than work.

The game is simple, featuring a four-stalled market placed in the center of the table with each stall containing one tile (pulled randomly from a bag) and four face up cards (money). The cards come from a deck of 4 suits (matching the 4 stalls in the market). On your turn you either take cards from your hand, all matching the suit of the market stall to buy the tile in the stall, or you take one of the face up money cards. Every time you pay exactly what the tile costs (putting the cards in the discard pile) you get an extra turn. The first time you take a money card or overpay for a tile (there is no change) your turn is complete. You are allowed to take two face up money cards if both have a value less than 5.

After buying tile(s) you place them in your personal Alhambra in front of you adhering to some relatively simple rules. Turn order is strictly clockwise so with less people you can plan for gathering money to grab that juicy market tile. With more players the less you are able to plan for the state of the market by the time your turn arrives.

At the beginning of the game the money deck is split into roughly 5 equal piles and a scoring card is shuffled into the 2nd and 4th piles and then the piles stack on top of one another. When a scoring card is pulled up to replace a card in the market, the game pauses and everyone scores their Alhambra. The tiles depict different colors and you determine majority in colors, look up values on a chart and assign points. In the 1st round only 1st place scores. In the 2nd round points are awarded for 1st & 2nd place. The 3rd scoring round occurs when the last tile is pulled from the bag and points are awarded for 1st, 2nd, & 3rd. In addition, each round affords each player points according to the length of the longest contiguous “wall” (dark border on the tile) that follows the outside of the Alhambra. In last night’s game, I managed to complete a perfect wall around my Alhambra with no gaps (see above). Very lucky.

I’m glad I got the opportunity to play Alhambra at GLG because it saved it from the trade pile. I’ll be looking to play it more often in casual settings.