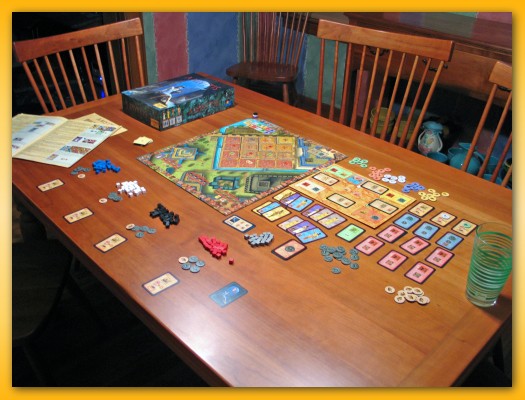 I started going through the rules of Amyitis last night and frankly, it’s a train wreck. Few games trigger such a visceral reaction while reading the rules but this one wins a prize hands down. I normally research games relatively thoroughly and if possible, I read through the rules online. Unfortunately, I threw the game in with an existing order, on a whim, due to it’s high praise and some good reviews. However, this thing has already made the short list onto the trade pile.

The game’s theme, using the term lightly, requires the players (Babylonian nobles) to compete for prestige (victory points) to build plants in the gardens in an attempt to please the king of Medes who is trying to build the Great Hanging Gardens of Babylon for his daughter Amyitis. It seems like an acceptable theme but unfortunately, the mechanics just don’t play it out.

First off, the rules are a complete mess. But to give credit where credit is due, they created a game that was difficult to express in written form. The confusing order of presentation and awkward sentence structure doesn’t help comprehension.

The components are well made but I do have some concerns about the quality of the cards. They feel rather thin and I suspect the ink will wear rather quickly.

My biggest complaint is with the sheer number of ill-named and disconnected items. Making sense of court cards, caravaner tokens, craft cards, gardener cards, talents, resource tokens, irrigation cubes, plants, temples, camels, merchants, peasants, priests, engineers, the Babylonian board, and the Mesopotamia board is a chore. I can deal with a lot of bits but when what you do with them doesn’t work in conjunction with their names and/or function, it turns fun into work.

Okay, I lied above. The components aren’t my biggest complaint. It seems that somewhere, at the core of this game, is a real game and they found some flaws with it during playtesting. Rather than reworking the core and simplifying, they threw in some more mechanics. Was there a dominant strategy that triggered the addition of the secondary board. Was the game uninteresting so they threw in the temple “tracks” to spice it up a bit. Regardless, what they’ve ended up with is a complete mishmash of various mechanics, several mini-games if you will that 1) don’t fit the theme, 2) don’t work well together, and 3) are difficult to remember and difficult to understand the relationships.

I’m not even going to attempt teaching it to my standard group. There are just too many good games out there that I’d rather play than to slog through the rules amid glazed eyes. It can’t be that fun.