Sophie, Noah, and I played a game of Clans by Leo Colovini tonight. It’s safe to say that I’m already a Clans fan given I spent a considerable amount of time writing my own Clans implementation for Marquand.net but I’ve never done a real review of the game. 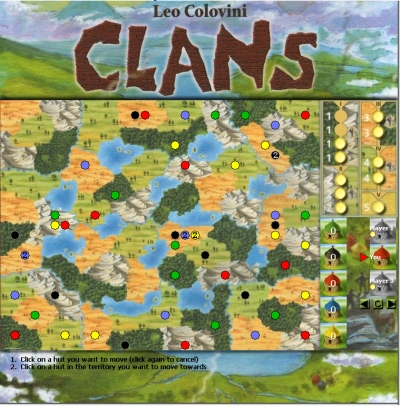 Clans depicts a point in our prehistory when our ancestors scratched out a nomadic existence. As resources in the territories became more scarce, the people became more desperate and conflicts arose driving small groups into surrounding territories. The game is played on a board depicting twelve regions made up of four terrain types (mountain, steppe, forest, grassland). Each region is populated by five clan huts, one of each color, and one hut per terrain type making a total of sixty huts spread out on the board.

The game has a unique characteristic that all colors are used no matter how many people are playing and your color is kept secret from your opponents. On your turn you move all of the huts from one region to an adjacent region on the board. The only stipulation is that you cannot move huts from a territory that contains seven or more huts (but you can add more huts to that territory) and you may not move huts into a region that is barren (devoid of huts).

The game is played over five epochs depicted on the right hand side of the board. Each epoch contains from one to four tokens awarded when huts form a village (become surrounded on all side by barren territories). When huts coalesce into a village, the player creating the village is awarded the next token from the epoch chart and each color of hut represented in the village is awarded the number of points equal to the total number of huts in the village. In this way, colors that are not represented by a player can receive points during play. If all colors are represented in the village, strife occurs and any colors represented by only a single hut are removed from the village and then points are awarded using the remaining huts.

The game ends immediately when the last token from the epoch track is awarded or when no more villages can be formed. Players then expose their hidden color and bonus points are awarded to represented colors equal to the number of tokens received during the game. The player with the most points is the winner.

The game is, for the most part, an abstract. The theme, although present, is irrelevant to the mechanics but it doesn’t conflict with the overall game play. I find the game an interesting beast. I’ve read comments that the game ‘plays itself’ but I’m not really sure what that means. My best guess is that players who agree with the statement, feel that there is little one can do to influence play. I wholeheartedly disagree with the statement! Clans is a game that I feel gives back the level of brain energy you put into it. If you act like it’s a brain burner then it will be.

I enjoy the hidden color aspect of the game where you try to outfox your opponents into thinking you’re a different color; the hope being that they inadvertently reward you points by included you in their villages. I enjoy the brain-buzz you get analyzing your opponents moves in an attempt to determine what color they are. The more you know about another player, the better prepared you are to stranding them on an unfavored terrain or locking them out of points due to strife. I enjoy trying to force as many of my opponents huts into an every shrinking region causing them to lose the ability to influence other parts of the board. And finally, I enjoy trying to outguess my opponents moves; should I make the village now or should I wait….

The game is somewhat of a pain to setup. Although different every time, there is a strategy to organizing the huts so that you get an even distribution of colors when the game begins. It’s not a game I enjoy playing every time I sit down but I do enjoy it. It plays fast and is enjoyable across the 2-4 player range listed on the box. As an added bonus, my kids enjoy it and, for the most part, understand the strategy.