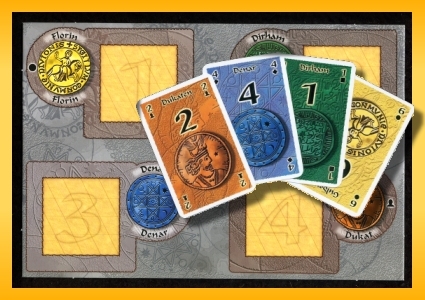 I ran across a post on BGG that made me shudder. Alhambra is considered a gateway game but for the life of me I cannot play the game with any sense of correctness. A gateway game is considered to be one that is easy to learn, shares a relatively comfortable feel to more mainstream games, and can be used to introduce ‘non-gamers’ to Euro-games. Now, I’ve played Alhambra numerous times and I thought I had the ruleset down but dammit if I haven’t missed one of the most important rules of the game. First it was wall scoring. Then it was when you’re allowed to place your purchased tiles. After that it was how to deal with inner walls. And now…it’s how the currency relates to the market stalls.

For some reason I had it in my head that during the game, the currency type didn’t matter when purchasing tiles. I think I thought that because there are several statements in the rules about currency not mattering in this phase. And then at the end of the game, the currency type does matter in determining who gets the remaining market tiles. Regardless…I am WRONG again. The BGG poster was correcting another player’s misinterpretation of this same rule so I suppose it’s not all that uncommon. However, in rereading the rules it’s extremely clear that you must pay in the currency defined by the market the tile is sitting on.

That changes everything given that it’s going to be much more difficult to get the ‘pay exactly’ bonus when purchasing tiles. Time to break this out and play again.