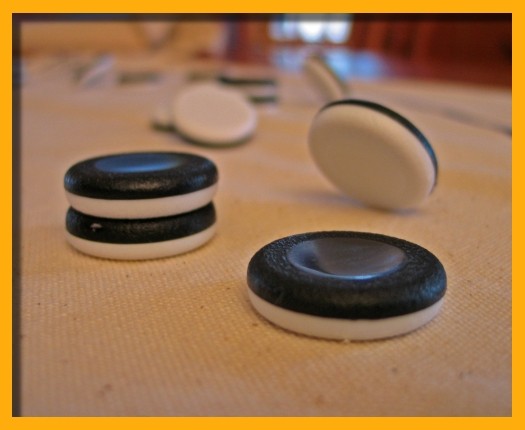 Sophie and I played a game of Polarity Christmas morning. Sophie won 16 to 13 by pulling off moves like this one. Polarity is a dexterity game for 2 players. At the beginning of the game, each player receives half of the magnets (one pole white and the other pole black). An all red magnet is flipped like a coin to determine which pole will face up in the center of the board and who will play which color. The ‘board’ is a large canvas sheet with a large circle painted on it and the named pole on the red magnet is placed in the center of the circle.

Play begins with the white player laying five magnets flat on the canvas followed by the black player laying five magnets. Players then alternate placing leaners against magnets already placed on the mat. A leaner is a magnet that is ‘hovering’ at an angle due to the magnetic force between the two or more discs. As leaners are played, the magnetic force may cause discs to shift position and ‘click’ together or fall/roll flat onto the canvas causing what’s called a fault. When you fault, your turn is immediately over. If your fault causes magnets to click together, then your opponent claims the ‘tower’ and gets to pick up and place the tower anywhere onto the mat (their color facing up). If you cause a magnet (or more) to click up onto a magnet in your hand, then you must add those magnets to the magnets you have yet to place on the mat.

Polarity is very addictive and at first it’s fun to just play with the magnets to get a feel for playing leaners in different situations. I have yet to play a double leaner in a game and it’s starting to bug me enough I might stay up late and practice!!!

I recieved a lot of games for Christmas this morning including: 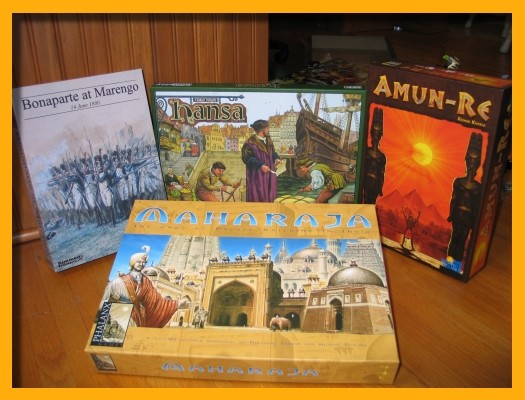