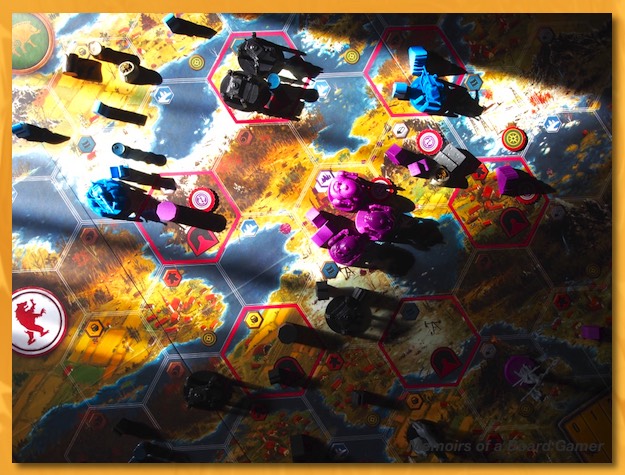 It is a time of unrest in 1920s Europa. The ashes from the first great war still darken the snow. The capitalistic city-state known simply as “The Factory”, which fueled the war with heavily armored mechs, has closed its doors, drawing the attention of several nearby countries.

Scythe is a Worker Placement/Economic Engine board game set in an alternate-history 1920s period. It is a time of farming and war, broken hearts and rusted gears, innovation and valor. In Scythe, each player represents a character from one of five factions of Eastern Europa who are attempting to earn their fortune and claim their faction’s stake in the land around the mysterious Factory. Players conquer territory, enlist new recruits, reap resources, gain villagers, build structures, and activate monstrous mechs.

Each player begins the game with different resources (power, coins, combat acumen, and popularity), a different starting location, and a hidden goal. Starting positions are specially calibrated to contribute to each faction’s uniqueness and the asymmetrical nature of the game (each faction always starts in the same place).

Scythe gives players almost complete control over their fate. Other than each player’s individual hidden objective card, the only elements of luck or variability are “encounter” cards that players will draw as they interact with the citizens of newly explored lands. Each encounter card provides the player with several options, allowing them to mitigate the luck of the draw through their selection. Combat is also driven by choices, not luck or randomness.

Scythe uses a streamlined action-selection mechanism (no rounds or phases) to keep gameplay moving at a brisk pace and reduce downtime between turns. While there is plenty of direct conflict for players who seek it, there is no player elimination.

Every part of Scythe has an aspect of engine-building to it. Players can upgrade actions to become more efficient, build structures that improve their position on the map, enlist new recruits to enhance character abilities, activate mechs to deter opponents from invading, and expand their borders to reap greater types and quantities of resources. These engine-building aspects create a sense of momentum and progress throughout the game. The order in which players improve their engine adds to the unique feel of each game, even when playing one faction multiple times.

Scythe is one of my favorites and I just had my first go with the Togawa Shogunate faction from the “Invaders from Afar” expansion. The new faction has a cool ability to drop armed trap tokens when the leader is moved. The player starts with four trap tokens and after being dropped and armed, they force opponents to pay an extra penalty to enter the hex. In addition, armed traps count towards the players end game scoring when determining who occupies and controls the hex.

Even though it looks like battling might be the core mechanic there’s enough of a penalty to combat that it won’t happen all that often. I enjoy the asymmetric nature of factions and the quick turns and the artwork really makes it pop.

Views: 2996
Spontaneously Combustible Games Launches Kickstarter for “Pests!” Board Game
A light strategy game for 2-6 players, “Pests!” is the first table top game from designer Michael McFarland & illustrator Todd Jakubisin
Cleveland, OH – February 21, 2017. Cleveland, Ohio’s Spontaneously Combustible Games is launching a Kickstarter campaign on February 21 for “Pests!”, a tabletop strategy game pitting exterminators against one another in a house infested with all kinds of critters.
“Pests!” features quirky art, easy-to-learn rules, and a variable game board that guarantees a fresh, fun experience every time you play. Up to 6 players choose an exterminator, each with unique pests to exterminate, and unique abilities to help them do so. Players compete to eliminate their infestation while keeping their fellow exterminators from doing the same.
The Kickstarter campaign will last 30 days, during which the aim is to raise the $9,500 dollars needed for manufacturing and fulfillment of the first production run of the game. If the campaign exceeds that goal during the campaign’s timeline, Spontaneously Combustible Games will reveal additional stretch goals: higher funding thresholds at which the manufacturing quality of included components will be upgraded to provide the best gaming experience possible. A pledge of $39 or more secures a copy of the game once manufacturing is complete, with shipping included to the US, the UK, the EU, Canada, and Australia. Pledges can be made starting February 21 on Spontaneously Combustible Games’ Kickstarter page at https://www.kickstarter.com/profile/scgames.
“The idea for the game started with an unfortunate encounter I had with a swarm of ants in my backyard,” says designer Michael McFarland. “That same night I had a nightmare of beating back wave after wave of bugs in my house, and awoke with an idea for a board game.” The creative collaboration with artist and illustrator Todd Jakubisin allowed for rapid development of a fully-realized game, which was then refined over the course of 6 months of intensive playtesting.
“Pests!” uses a modular board, allowing players to create the game’s play area at the beginning of each game, making the game board different every time. The game is very easy to learn and has a lot of opportunity for strategic depth as you get more familiar with the characters and their abilities. Victory is achieved by capturing the queen pest, sealing the nest room, exterminating all small pests, and finally emptying the trap containing the queen to end the infestation and win the game. The game is for 2-6 players, ages 14 and older, and takes 45-75 minutes to play. “Pests!” includes 25 house room tiles, 6 character cards, 2 dice (one standard 6-sided die, and one “Queen Die” that determines the actions of the queen pests), 12 standees representing the 6 exterminators and 6 queen pests, 144 chipboard pest discs, 28 toolbox cards, 7 traps, and 6 nest seal tokens.
Claim your copy of “Pests!” starting February 21 at https://www.kickstarter.com/profile/scgames.
About Spontaneously Combustible Games
Spontaneously Combustible Games is an independent tabletop game developer and publisher based out of Cleveland, Ohio. They focus on designing creative, unique games that are easy to learn but feature enough strategy and variation to stay fresh and interesting. Spontaneously Combustible Games is a member of the Indie Game Alliance (http://indiegamealliance.com/), a confederation of independent game developers and publishers with member studios on 6 continents. Learn more about Spontaneously Combustible Games at http://games.spontaneouslycombustible.com.

If you’re looking for a quick, family-friendly, dice game take a peek at Last Chip Standing: Devil’s Luck on Kickstarter. It doesn’t look like they need much to complete their goal and you’d get some cool custom dice to boot.

If we hit all our stretch goals, we’re hoping to improve all of our components and make this game the best version of itself! That means: