I’ve been making my way through my Kickstarted Reaper Bones box of minis and practicing my painting skills. I don’t know what I’ll do with these things since they don’t go with a specific game but I’m finding them a great tool for honing different shading, highlighting, and base coating techniques. So far, I’ve been very happy with the Vallejo acrylics but I need some more browns. Luckily, with my birthday yesterday, my son and daughter pooled some money and got me four more brown shades. What a perfect gift.

Brushes are another matter. For detail work, I’m using mostly 0 and 00 sized brushes but I may need to spend a few more dollars on some better brushes. The ones I have don’t hold their shape very well without being loaded up with paint. Maybe my paint needs to be thinned a bit more. I also need to pick up some sealants (brush on matte varnish).

There’s so much to learn and given that these are only my second and third attempts at painting I wouldn’t put much stock in my amateuristic musings. I am, however, having a lot of fun, I’m learning fast, and I’m encouraged by how they’re turning out. 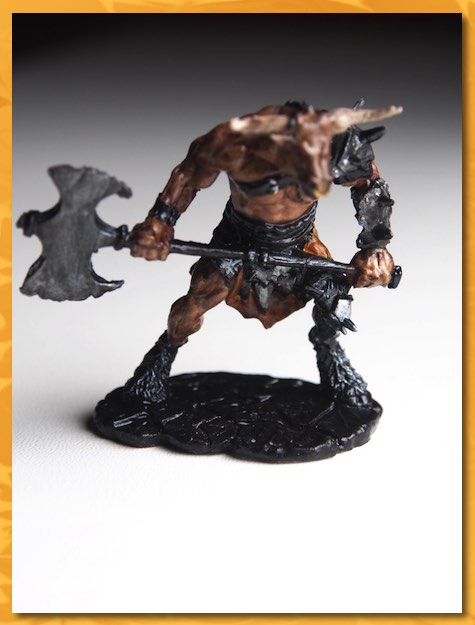 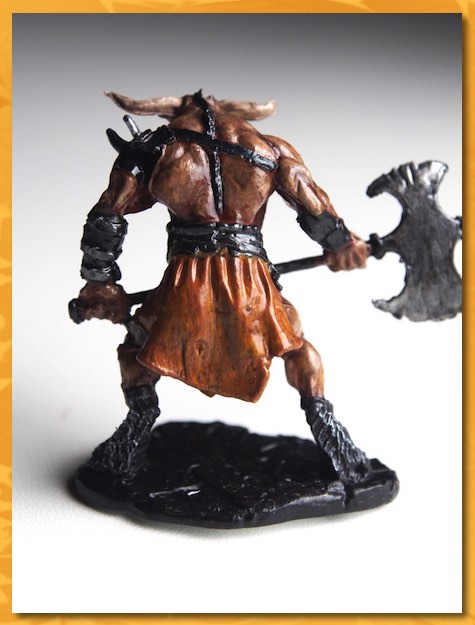 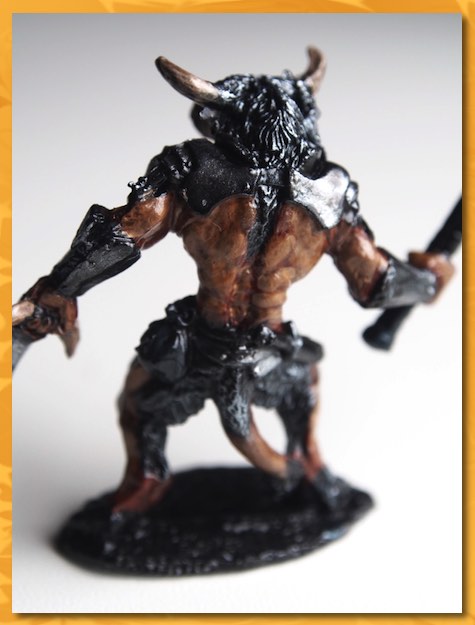 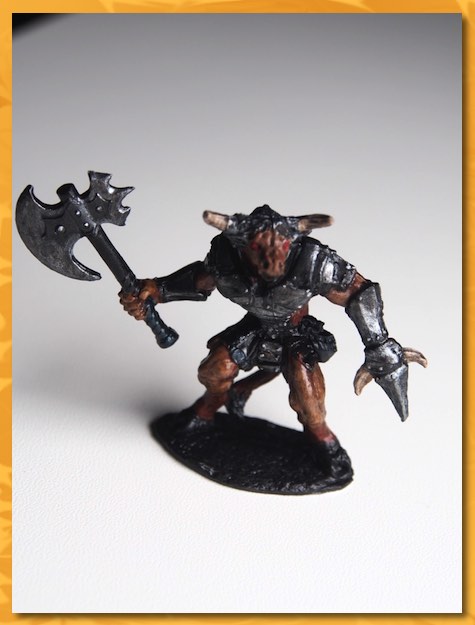 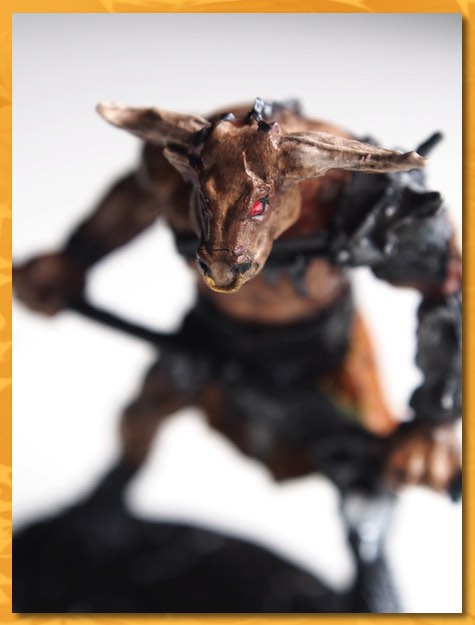 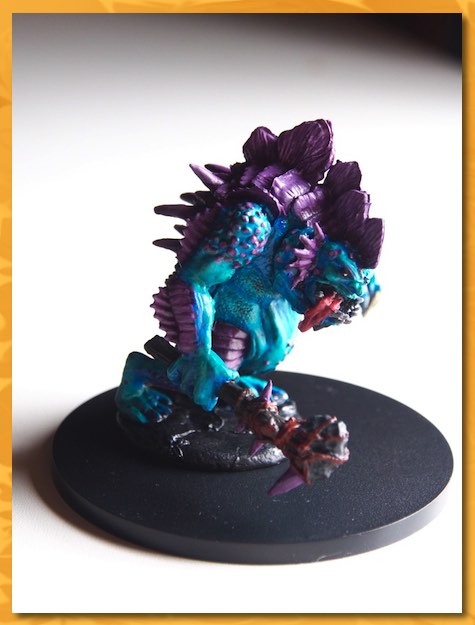 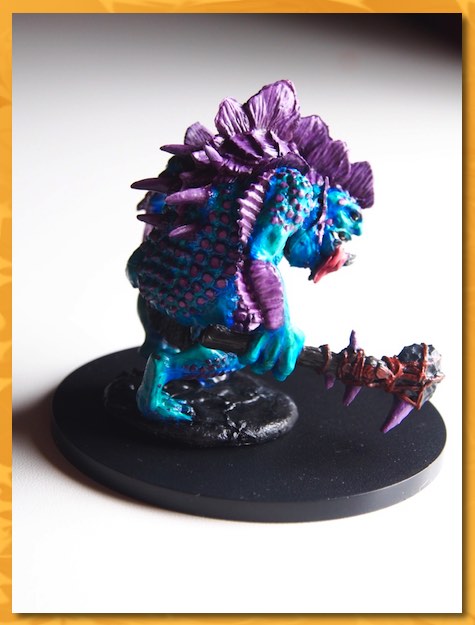 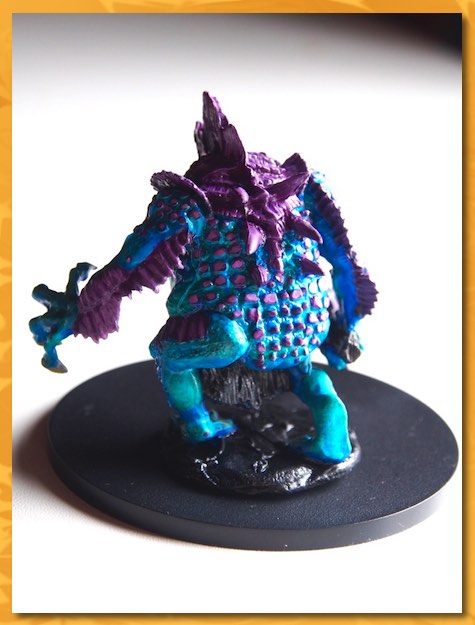 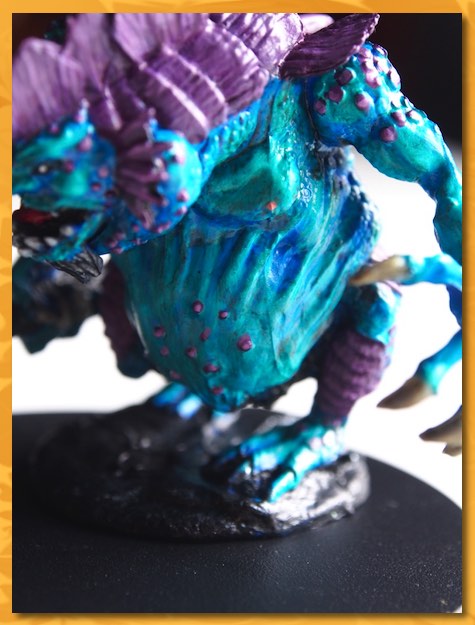 Three and a half years ago I took a shot at pimping out my Tzolk’n gears.. It was my first attempt at painting anything game related and I thought they turned out pretty well. When I was a kid, I built a lot of plastic models. Cars, trucks, planes, helicopters, clipper ships, you name it and I probably built it. I had a small collection of those little squarish, glass bottles of Testors paint but I was never happy with how the paint turned out. Brush streaks, fingerprints (I was a bit anxious for it to dry), and even hair stuck in it from the family dog, blech.

Fast-forward 40 years and I’ve decided to take another shot at painting some plastic. I Kickstarted a batch of Reaper Bones II minis way back in 2013 so I have hundreds of minis to practice on before tackling something like Blood Rage or Scythe. But first things first, I have to know a bit more about what I’m doing.

YouTube has become my best friend and I’ve spent many hours over the last couple of weeks watching “How-To” videos learning tricks of the trade, etc.  “Yes, honey, I’m watching someone narrate technique while painting a plastic figure again…but this time it’s an ogre!”   If I could boil all of the videos down to one thing it would be, “you’ve just got to try it and stick with what you like.”  As with most things on the internet, people are polarized on everything: prime with white, no black is the way to go. Acrylics, no oils. Shade before highlighting, no after. Dry-brushing is for wimps. Dry-brushing for Pros!  I don’t even want to get into mini quality or paint & brush suppliers.

That said, though, I have started to gravitate towards liking the work ofDr. Faust’s Painting Clinic. He rushes sometimes and can be a bit sloppy but I appreciate all the different techniques he has for shading, highlighting, and color selection. I’ve found it the most informative of all that I’ve watched.

So, armed with some small percentage of the information that I could retain, I ordered a smattering of Vallejo paints, washes, and brushes (thanks Prime) and a couple of days later I was ready to try something. I dug around in my Reaper Bones box and pulled out three tiny little frogs (they’re only 1 inch from the top of the head to the base). I was a bit concerned that they were too tiny to start with but, what the heck. Go big or go home. 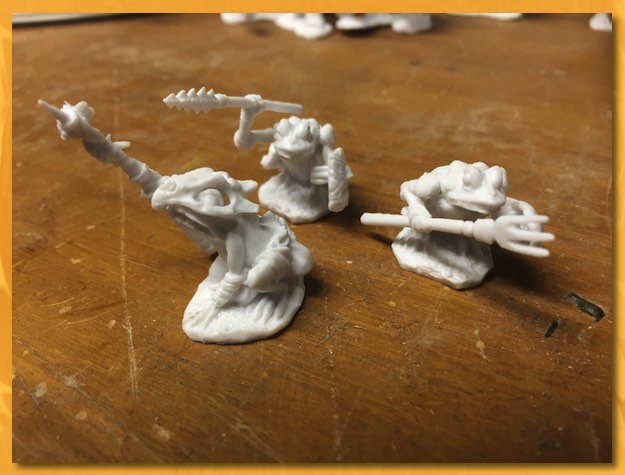 All my paints from my order had not been delivered but I primed them black, put on a base coat, and started bringing up the color, started applying some highlights. 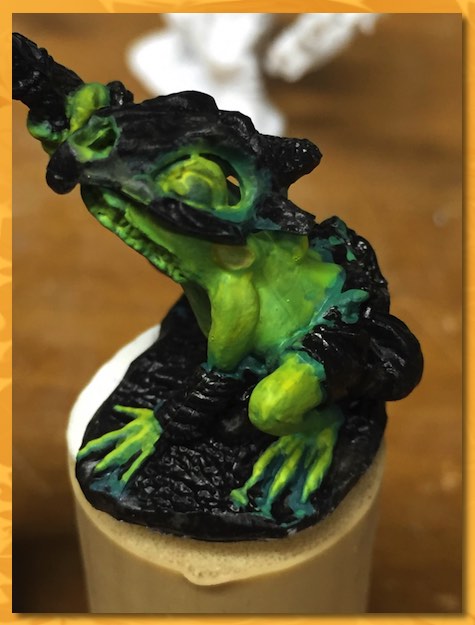 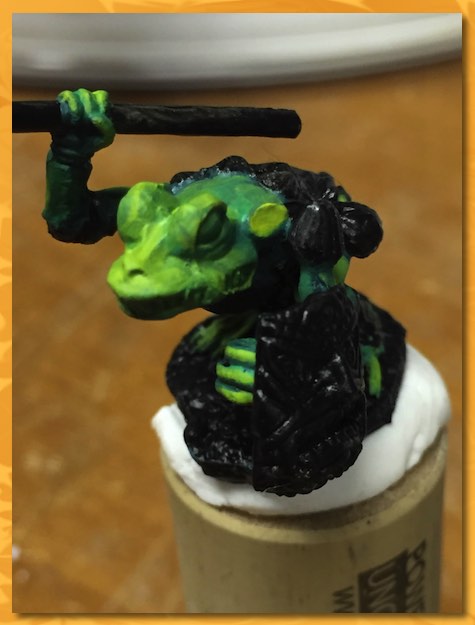 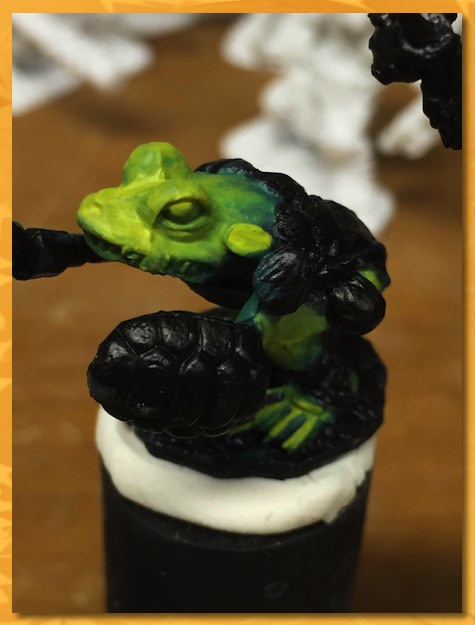 After some washes, restoring highlights that got lost in wash, struggling with the tiny shell armor on their backs, tweaking the skin after another wash, I was almost done.  By this time I really needed the rest of my Vallejo paints but my son let me borrow some of his Testors paints and I was able to use those to mix up a couple different browns for wood and leather.  I was particularly happy with how the bone skull turned out. 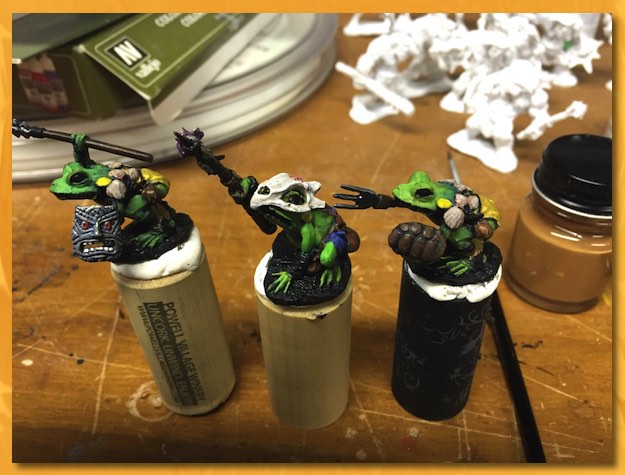 With a few more highlights and tweaks I called it a day. I’ve got a lot to learn about the paint and prepping the model. I’ve got several cast lines I was totally unaware of until I saw the macro images below.  My highlighting is very crude and my technique is all over the map. But, given that it’s my first attempt, I was very happy with how they all turned out. I do, however, think I may need to get a magnifying light/lens. These old eyes aren’t going to last long. 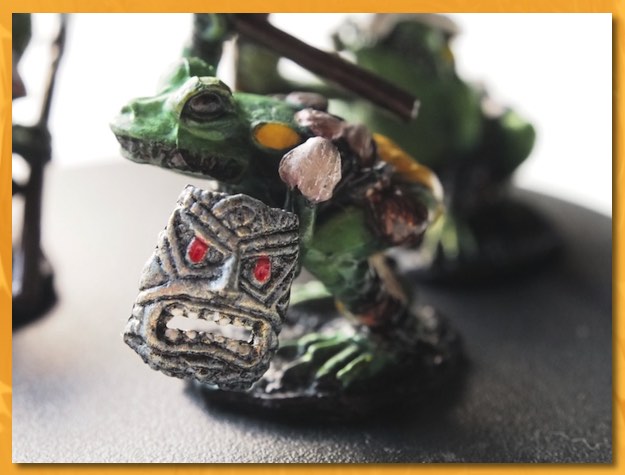 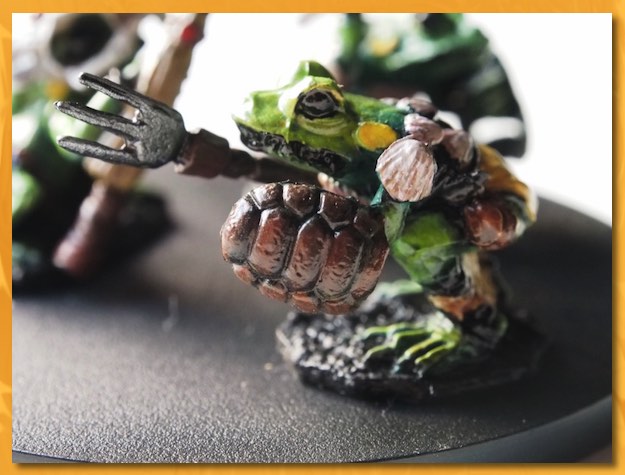 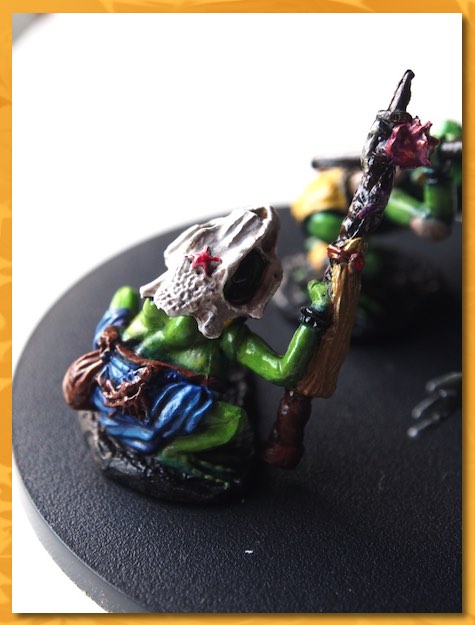 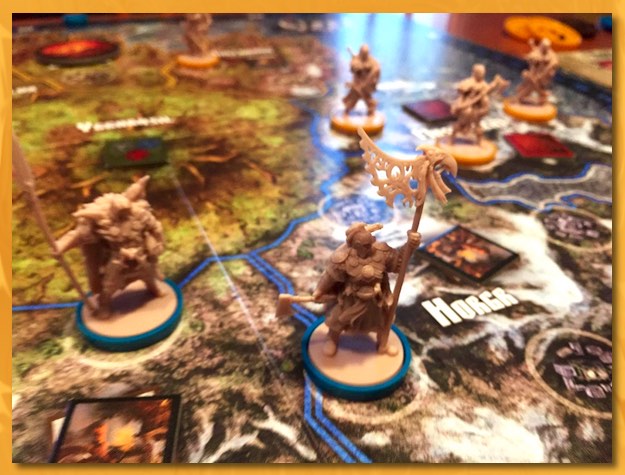 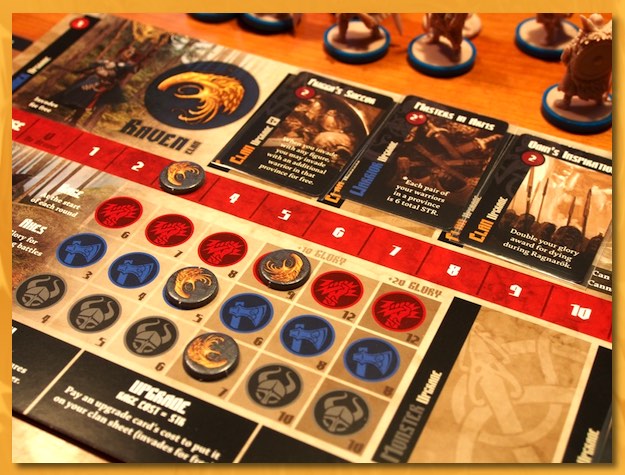 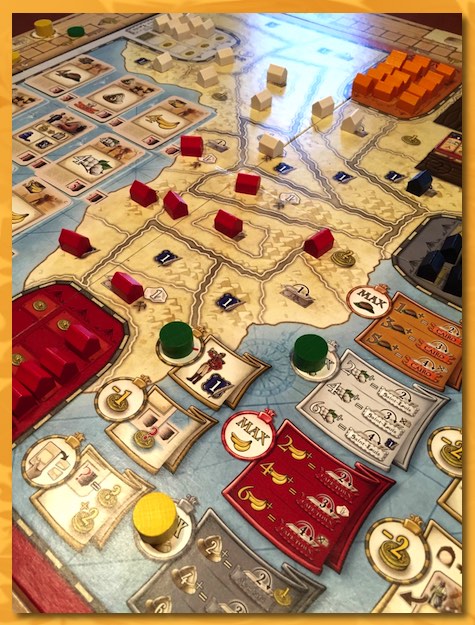 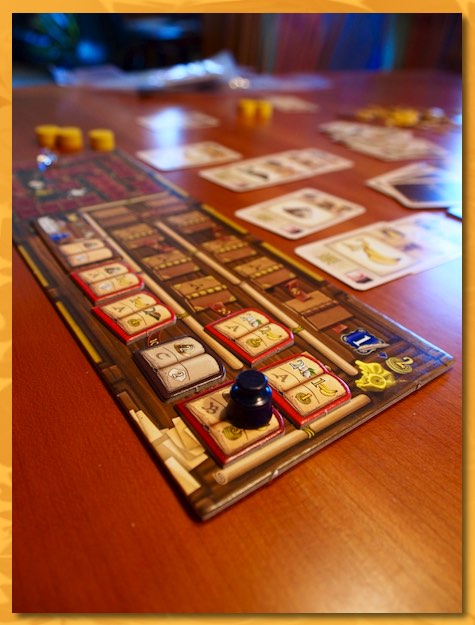 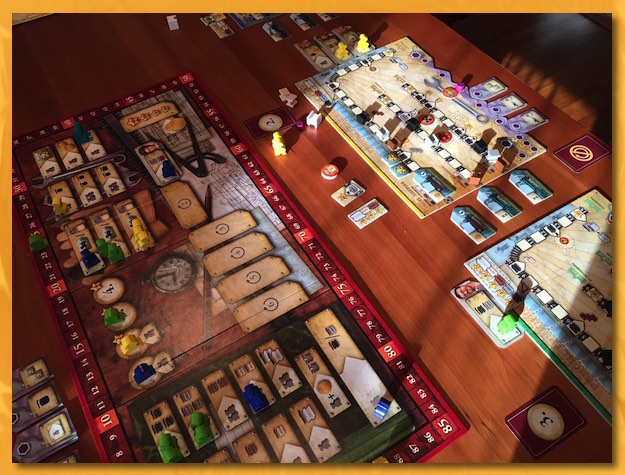