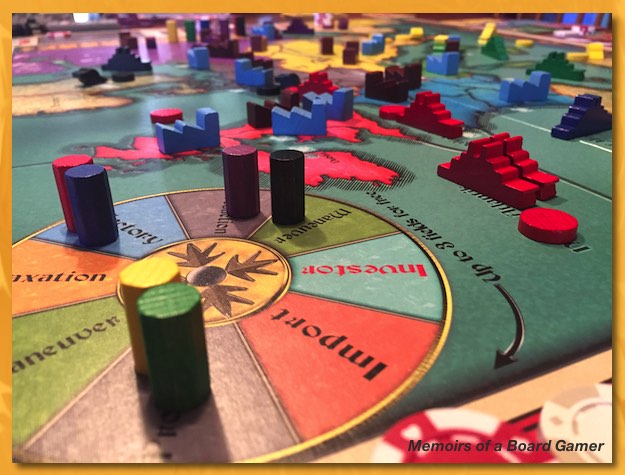 Europe in the age of imperialism. International investors try to achieve the greatest influence in Europe. With their bonds, they control the politics of the six imperial nations: Austria-Hungary, Italy, France, Great Britain, the German Empire, and Russia. The nations erect factories, build fleets, and deploy armies. The investors watch as their nations expand, wage wars, levy taxes, and collect the proceeds. Since the European nations are under the shifting influence of different investors, new strategic alliances and conflicts arise between them again and again!

Each player represents an international investor. Only he who succeeds in increasing his capital and gaining influence in the most powerful European nations will win the imperial competition.

Imperial is a varied strategy game without the luck of dice or cards. Two to six players, from about twelve years and up, take on the role of imperial investors. The duration of the game is about two to three hours.

Imperial is one of those classic games. It was designed by one of my favorite designers, Mac Gerdts, back in 2006 but I just never had the opportunity to play it. It’s considered a medium-heavy game with a relatively long play time for my group (120-180 minutes) and it’s the type of game I’d usually have to twist some people’s arms to play and maybe only at Cabin Con when we’ve got plenty of time for some head’s down play-time.

I own many of Mac’s notable titles and greatly enjoy his signature mechanic: the rondel (a circular action selection mechanism).

As luck would have it, we only had three at a recent game night and it felt like the right time to offer to teach the game. I brought along my mini-poker chip set to replace the paper money and within about 30 minutes we got under way. There were a lot of questions about the mechanics but it’s really not a difficult game to grasp. I’d heard that it was a real brain burner but as I’d suspected and hoped from other Gerdt’s games, it’s not the rules that make it hard. Instead, it’s just the options with which you’re faced and the decisions you have to make. 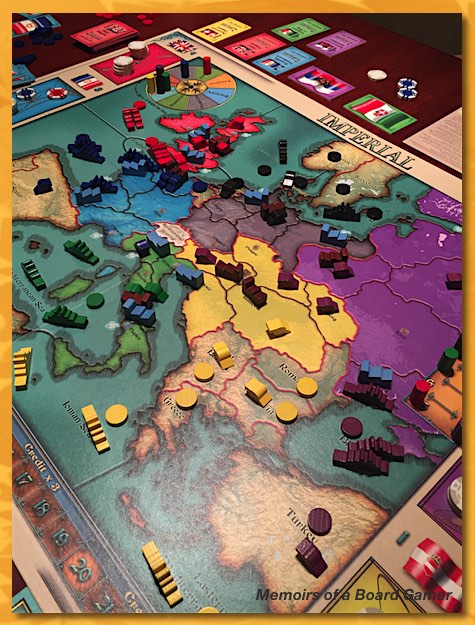 At first blush, non-gamers might say the game looks like Risk. I get that and I could even say there are vague similarities but to a gamer, it’s completely different. It’s like playing an inverted form of Risk where battles aren’t the core goal. More on that later.

In Imperial, players do not play a specific color. Instead, each of the six countries are represented as a color and players, instead, vie for control of the country by investing money in the country’s coffers and obtaining bonds. It feels a bit like buying stock in a company.

In each round, each country gets a chance to take a turn and the player with the largest amount of bonds (controlling shares) gets to move the country’s token on the rondel and to take that country’s turn. The more countries you control, the more turns you take during a round. If you don’t control any countries, well, that sucks. More on that later.

When a country takes a turn, the controlling player moves the marker on the rondel using Gerdt’s standard rondel mechanism. A few clockwise moves (3) are free and any more costs the player some money out of the their personal account. Money equates to victory points so this can be a tough decision.

The rondel contains action items that allow the player to use the country’s money (obtained when a bond was purchased by a player) to build armies, ships, factories, tax, invest, and maneuver.

A country needs to build armies and ships to expand during maneuver operations so that they can occupy more territory so that when the territory is taxed, players earn money and the ability to move the country’s marker up a track that will both eventually trigger the end game and acts as a multiplier for owned bonds (shares) in the country.  At the end of the game, players get money from their bonds and the higher the multiplier for the country the better.

It sounds a bit like there are clearly prescribed actions but that’s far from reality. There are some really tough decisions when selecting a rondel action for the country. Choosing to tax your citizens rather building more ships and armies, or maneuvering them to protect the country’s assets from other neighboring countries can be significant.  The game allows counties to invade other countries in a friendly or aggressive manner but the game is not a war game.  You shouldn’t really be focussing on battle but it does play a role. Invading a country did feel odd to us because doing so doesn’t provide a direct, net-positive impact to the invader. Instead, the act only negatively impacts the invaded country so the impact is only felt by the aggressor as an indirect benefit.

We played with the “investor” card as the rules describe but there are a lot of forum entries on BGG that discuss its merits positively and negatively. We certainly could see how it injects money into the market which can be a bad thing and stifles the ability to invest. While playing I certainly used the card to my advantage to restrict the investment ability from other players who I knew wanted to invest but couldn’t if I didn’t let them. I’d really like to play again without the investor card to see how it impacts the game.

The game feels a bit like inverted Risk in that players don’t play a specific color and have to be aware that at any point, a player may take over the color that players have begun to feel a false sense of ownership. This is one of the biggest hurdles for my group. We started to feel very protective of a country as if it was “mine” and at times, it’s just time to let it go and move on to another country. In addition, on a couple of occasions, I watched a neighboring country build up a strong army and begin to attack and I took over control of the country to the dismay of the player who previously controlled the country. At times, it’s better to just take it over than to fight it.

By the end of the game, one of the players had only one country and felt the game lagged a lot from the inability to invest in more countries (he had plenty of money but had no opportunity to use it effectively) and the lack of turns he was taking each round. Without the investor card, I’m sure this would have played out much differently so that’s another reason I’m excited to play again.

I really liked the game, but it did take 3.5 hours for us to play. We’re not particularly slow but that’s still a long game for us. For me, though, the game is a keeper and I’ll not be putting it on my trade list any time soon.