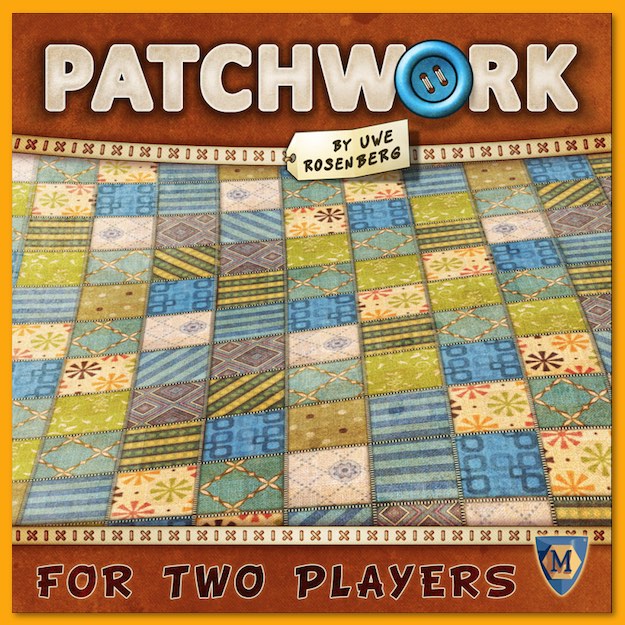 As most of you already know, I’m always on the lookout for good two-player games. Patchwork has been on my list for a few months and Lisa was a champ working behind the scenes to pick up a copy for my birthday last month.

Patchwork is a strictly two-player game that feels like it belongs in the Kosmos suite of two—player games. Designed in 2014 by Uwe Rosenberg (Agricola, At the Gates of Loyang, Bohnanza, Caverna, Le Havre, Merkator, Ora et Labora just to name a few), players compete to purchase patches of fabric to make the most valuable patchwork quilt. After only 15-30 minutes, the player who has earned the most buttons (victory points) is the winner. 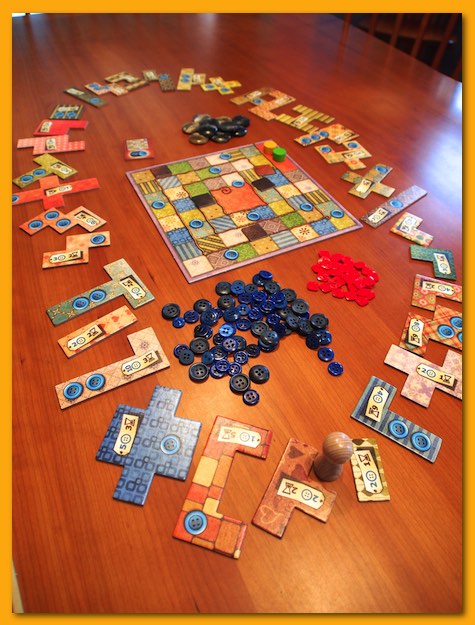 Play begins with a central board where players track time. Surrounding that board is a ring of randomized Tetris-like pieces that represent the patches available for purchase. Cardboard chits depicting buttons represent both victory points and the currency in the game. I’ve replaced the chits with actual buttons though so don’t get thrown off by that.

Taking a closer look at the time track, each player marks their position with a wooden disk and as the game progresses, players move their marker along the track. The game features a time-based mechanic so as players take turns they spend time (and money) to add patches to their quilt and like other games, the player that is the furthest back on the time track (Glen More) represents the player that takes the next turn. When a marker moves beyond a button, players earn money (score buttons) for their in-progress quilt. A small number of single-tile patches are up for grabs for the first player to pass them on the time track. 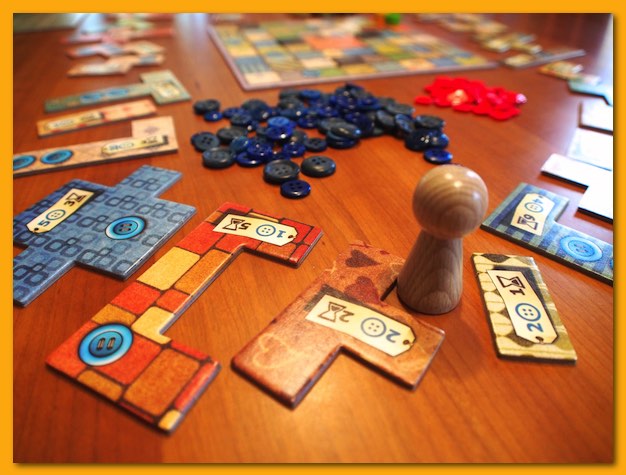 When a player takes a turn, they must choose one of two options: jump immediately ahead of the other player on the time track and earn buttons (money/VPs) -or- purchase a patchwork tile from the market. Within the ring of patches is a large wooden pawn representing the start of the market and players can purchase any of the next three patches. Unlike Morels, there’s no way to pay anything to reach farther ahead than those first three patches, so if you want to purchase one of them, you simply pay the cost and move the large pawn to the position of the patch establishing the new start of the market.

The purchased patch depicts a cost (in buttons) and a time cost (an hourglass) so players must evaluate both cost and time and how that relates to their movement on the track relative to the other player. In addition, players need to consider where the market is positioned when their turn ends. 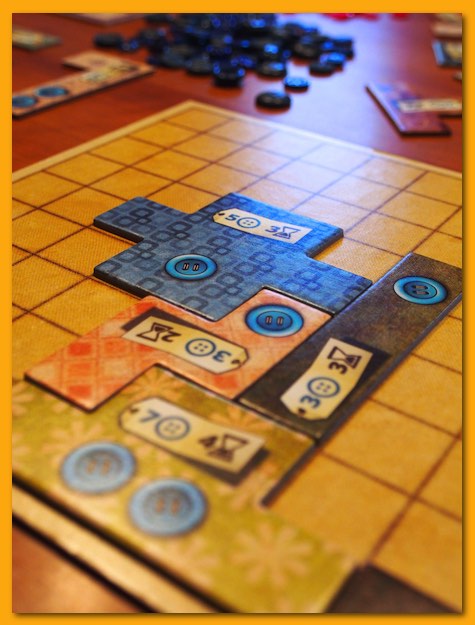 Purchased patches (players pay in buttons) are placed on personal player board in whatever position is desired but once placed, they cannot be moved. Players then move their time marker forward on the time track the number of spaces depicted on the patch and if a single-tile patch is crossed, the player earns the patch (taking it from the time track and placing it immediately on their board) or if a button is passed, the player earns the number of buttons depicted on the patches on their in-progress quilt (in the image above the player would earn 5 buttons from the bank since there are 5 blue buttons sewn into the patchwork quilt so far).

The game ends when both player’s time marker reaches the center of the board. Players count their remaining buttons (the real ones not the ones on their quilt) and subtract two (!) for every empty spot on their quilt. The player with the highest number of remaining buttons wins the game. I’ll warn you, though, that those negative two points for each empty/uncovered spot really add up (or rather, really take away)!

Patchwork is an innovative game but very simple to teach and learn and the theme really resonates with gamers and non-gamers. Lisa and I will certainly be including it in our standard short-list of go-to two-player games. At 30 minutes, you can hardly go wrong. Patchwork provides just enough depth for a light evening of gaming and the small package is a great addition to a small stash of games to take on vacation. Pick up a copy and give it a try!