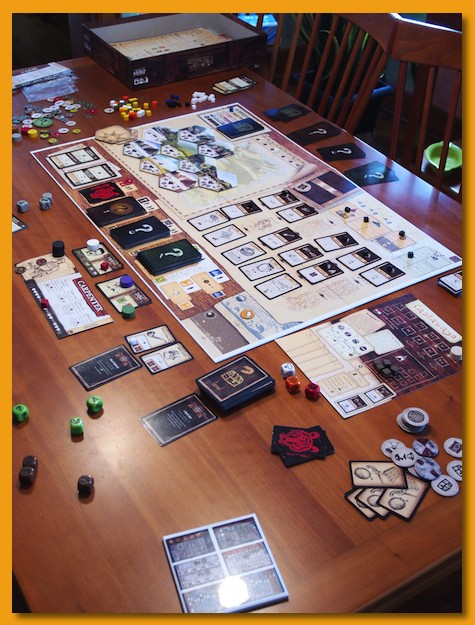 I’ve been having a lot of fun playing a “new to me” game called Robinson Crusoe: Adventure on the Cursed Island. The game is cooperative, in that everybody wins or everybody loses but it also features a solo variant so I have had a lot more opportunities to play the game than I would otherwise. 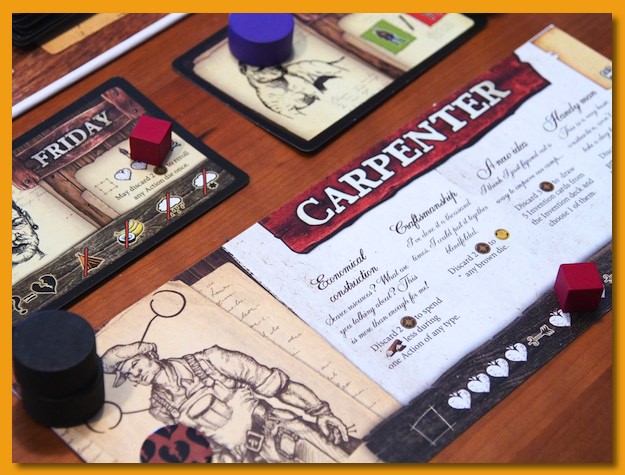 Robinson is designed to support from 1-4 players and lasts a couple of hours. Players take on the role of a character that has survived a shipwreck on the island and your group has to try to accomplish some goal before being rescued. The game features several scenarios you can choose to play that define the goal you must accomplish but many other aspects of the game will keep that goal interesting and fresh. Each time you play you will be facing all kinds of new situations, events, adventures, beasts, and weather in your attempt to stay alive long enough and to meet your goal. 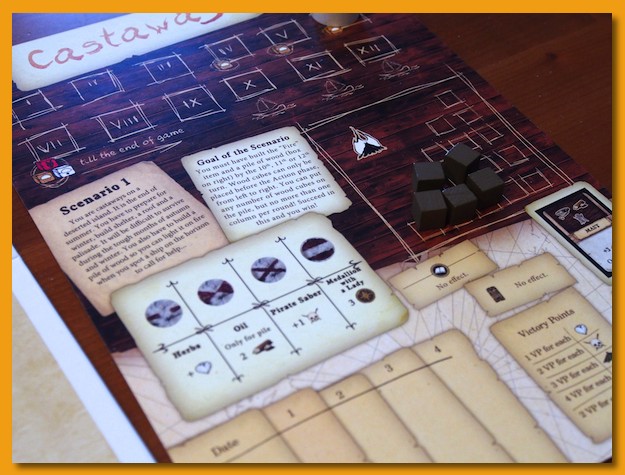 I’ve been focusing on the first scenario “Castaways”. You goal is to gather enough wood to pile it into a bonfire and to start it on fire some time in turns 10-12. Resources are extremely tight and many times you’ve got to make really tough decisions about using the wood you gather to build other things you need to build rather than adding it to your pile. On top of all that, you’ve got to gather food to survive each day but not too much as food rots each night so every day you’ve got to find at least some. For every situation and requirement the game throws at you that you cannot fulfill, you must take wounds. Too many wounds and you’ll die and lose the game. 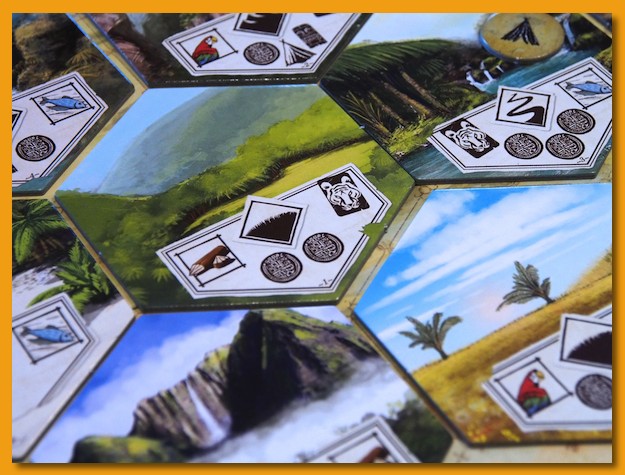 The game is steeped in theme and as the rounds unfold you have chances to explore the island placing randomly drawn tiles out onto the board. As you explore, you discover items you might be able to use, see beasts in the jungle that you can choose to hunt for food and fur (they may hunt you when you’re not looking!), etc. However, you may also be forced to participate in an adventure while you were off exploring your new area and during this adventure you may be wounded by an animal, find old items, become injured in a fall that may affect your ability to play well later in the game when you finally can’t take the pain any more. 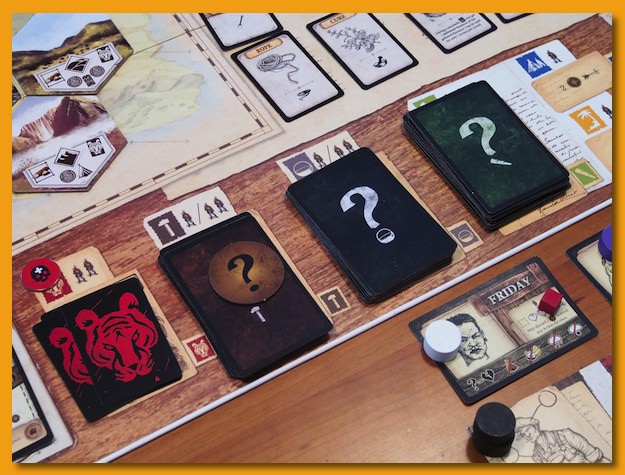 These adventures can occur during many different actions in the game while hunting beasts, building structures and items, gathering resources, or exploring. As in real life, trying to stay alive is a dangerous business and usually these adventures are a bad thing to have to deal with. They may only affect you but they may come back later to affect your whole group when other more global events occur. 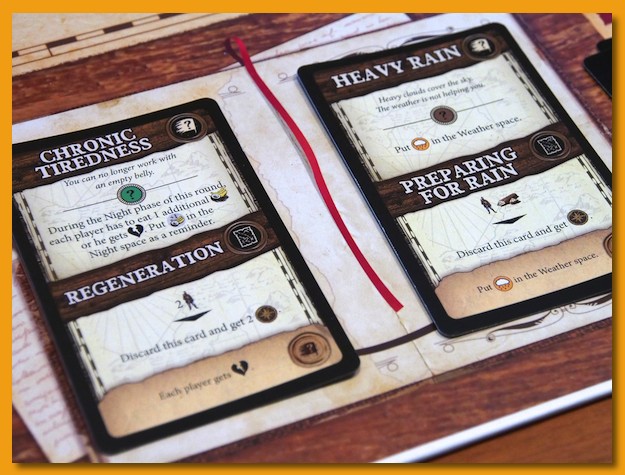 Each round a major event is uncovered, impacting the entire group. This event card is then placed near the bottom of the board and remains for a few turns allowing your group to deal with removing the threat described by the card. If your group ignores the threat, then you’ll be impacted again by the threat further reducing or at least impacting what you’re trying to accomplish. 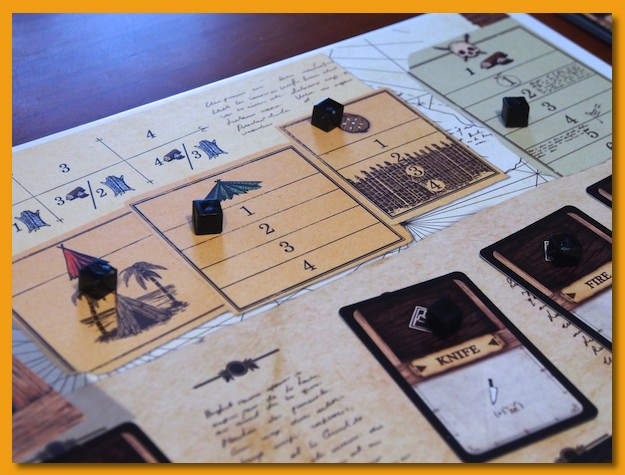 To prepare for hunting and scavaging predators, bad weather, and the coming winter storms, players can devote resources to building various structures that include a shelter to spend the night in (if you sleep outside you take a wound), a roof to keep off some of the rain, a palisade to fend of wild creatures, and a strong weapon’s level to also fight/kill creatures. If you ignore these structures too long, the weather will eventually do you in as the winter storms are brutal. You’re going to need some protection from them. But not too much; remember you need to put some wood on the pile and light it on fire. But wait, where would do you get fire? 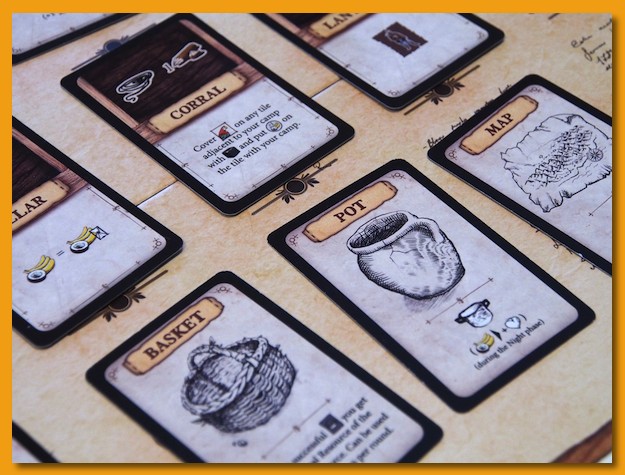 Each scenario starts with a field of inventions or ideas that your group has and if you choose to take actions to build them and manage to build them successfully (and hold onto them), you can take advantage of their special ability. These inventions usually require you to give up some sort of resource or have explored a specific terrain type of the island, others require you to have built a prerequisite invention.

I have to say, after 5 plays of the first scenario I’ve only won once and each game has been really different. The number of cards and which ones show up in any given game means there is an extreme amount of variability and replay value in the box. The rules aren’t overly complex but they’re woefully incomplete and a bit vague. It’s not uncommon to reveal an event and immediately have a question about how you might interpret what is required to fulfill it. However, in most cases, if you just try to think back to the theme and what might happen if the event occurred in real life, you’ll probably be close, if not spot on, to what the rules intended.

I’m really looking forward to my next play. I’ve heard of people playing dozens of times on just the first scenario and not beating it and after having played I can see why. It’s really tough to survive let alone meet the goals of the scenario. That first win really feels like you earned it.