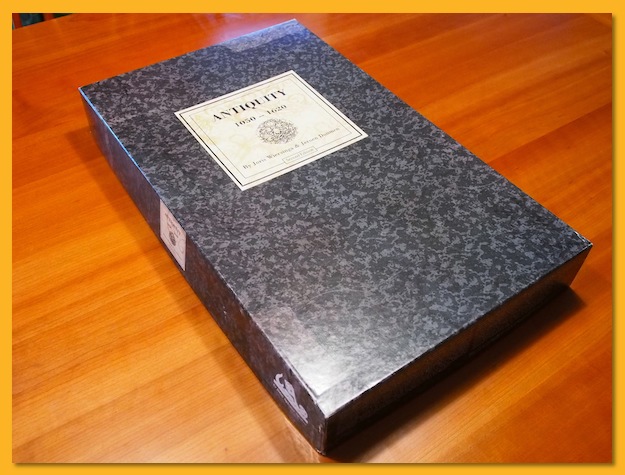 Most hobbyist board gamers [collectors] have at least one grail game. A game that is special, would round out a collection, is hard to find in good condition, is rare (maybe only a handful were produced), and is usually…expensive.

For the longest time my grail game was a copy of Tal der Könige, the game with the goofy triangular, disco-styled, box, but with some of the most awesome looking bits at the time. I picked up a copy and bought it for a reasonable amount from an attendee at a past Great Lakes Games convention.

Since then, I haven’t really thought much about what my grail game would be. However, over the past six months, Antiquity started bubbling to the top, brewing, and I started browsing what others had to say about it, the depth, and availability.

After browsing, Antiquity became my new grail and although not terribly difficult to find, it was, for me, relatively expensive. However, an FB (and BGG) friend of mine, was kind enough to sell me his unpunched (!), second edition copy for what he paid for it plus shipping. Encouraged by others, I just had to get it.

Now, shipping this beast isn’t cheap. The box is very long and with all of the packing materials it cost upwards of $20 to ship it but I’ve got no regrets and it’s in my loving hands now.

I’ve punched and sorted the roughly 500 bits of cardboard and wood and read through the 12 pages (very small considering the depth) of rules and I’m ready for an introductory game. However, even though I’ve read the rules, I have no idea how to play. Antiquity feels like it’s going to be epic and I would really love to find some other newbies willing to put the time in on learning this thing. I wouldn’t be surprised if that first game would take half a day.

They say once you know what you’re doing, it plays in about 2 hours but that’s going to be a long way off for me. But that’s a good thing and I’m looking forward to it.