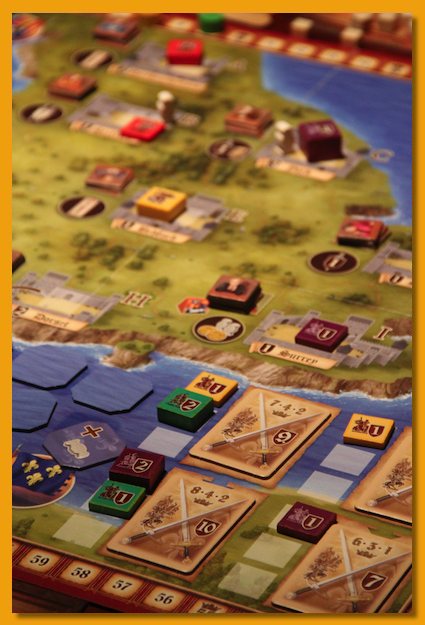 I brought my copy of Lancaster for a visit to my Analog Game Group. It was the first time the game had been played by any of us so we worked through the rules, set up the game, and gave it a go. I like the game but I have to apologize for being a hard-ass early in the game. I have this behavioral trait, that I continually need to work on, that I don’t like playing other people’s turn as a group. So if someone does something that looks like a questionable move, I don’t really like others to point out why that’s a bad move and then allow the player to back up and replay their turn. My logic is rooted in how group-play on everyone’s turn slows everything down and it becomes less of a game and more of a game-by-committee. One of the players made a move early in the game with a #2 night (they only had a #1 in their court) and sent that night to a losing 2nd attempt at battling the French. I didn’t realize he didn’t have enough to ransom the night. At the end of his turn, as we moved to the next player I pointed out that he’d most likely have to ransom that night as it looked like the British would lose again. With the new information, he wanted to back up and rethink his turn. He asked the group and I voiced my opinion without thinking and said I thought he should probably just stick to taking the lumps. Nobody else chimed in that they thought it was okay to back up and I backpedaled and said that I was only one voice. I need to lighten up. I’m working on it.

I liked the game but it’s a bit opaque. There are a lot of things to do and on your first play it’s difficult to see what a good move is. The game plays very quickly so it’s an odd feeling to not be able to clearly see the impact of a move in the long term when long, in this game, is only about 60 minutes. I’m sure more plays will make it clearer but I suspect getting it to the table will be a bit difficult due to my hard-assness. Sorry about that guys. One player stated they liked it…kind of…but they were unsure that it was worth playing again to find out for sure. I’d play it again if that means anything. 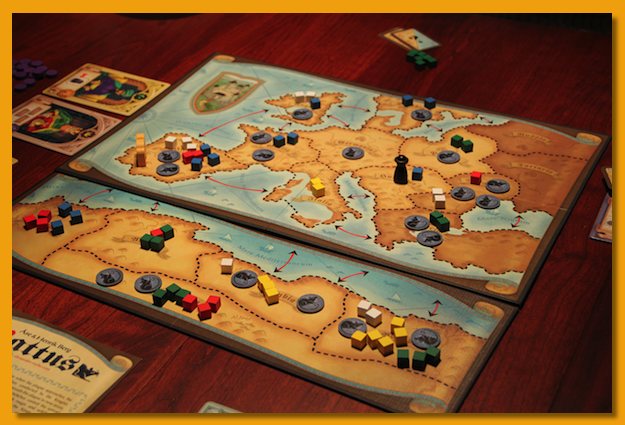 Next up was Rattus Africanus, the expansion that increases the supported players to 5/6. With the northern Africa board, the available territories are expanded and the addition of the Islamic “class cards” gives more options. The expansion introduces region cards which in every game allows a player to throw up blocks to some of the rats (one time use) by protecting cubes from the effects of a specific class card “hit”. The “All” and “Majority” hits by the rats always take effect. Depending on the class cards in play, players have the option of choosing more cards from the region deck in hopes of protecting themselves in more regions throughout the game. The expansion also introduces a class card that adds a camel that is allowed to move through the regions dropping cubes in regions it leaves. Which cubes it leaves behind is dependent on who has majority and in some cases, it may drop cubes of many colors. I refer to the camel as the rainbow pooper.

I think the expansion is a great addition to Rattus. The Africa board is not used for less than 5 players but the class cards and region cards can be used with smaller numbers. They continue to do a nice job integrating new class cards into the existing base game cards and the 1st expansion, The Pied Piper. Some of the effects when used in conjunction with other class cards can get a bit ambiguous but the rules do a nice job of making those corner cases clear. You need all new rat tokens for Africanus as the tokens must include the right mix of class card symbols.