Lisa and I continued to play a game almost every night in May pulling out long forgotten titles as well as ones we’ve recently played and could get up and running in no time.

We both like Castles of Burgundy for two. The game morphs very well for all numbers of players. 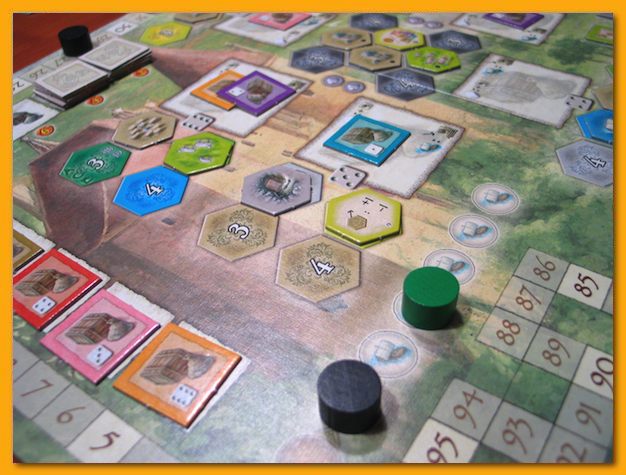 Thurn and Taxis: Power and Glory. We both like this expansion best since it’s more forgiving when you don’t have a good card to play. 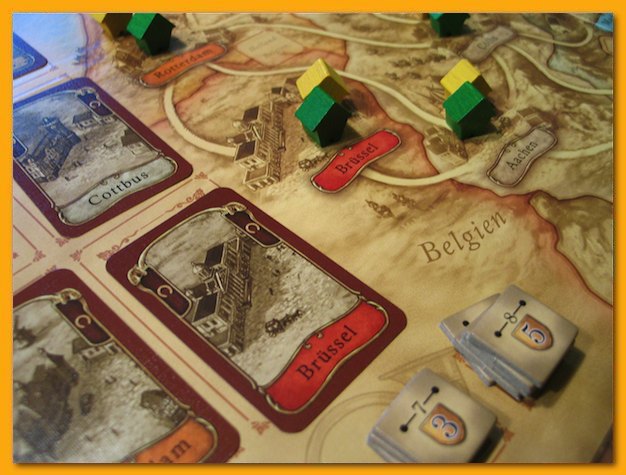 Lisa does pretty well at Egizia and seems to like it. The sphynx cards are key. 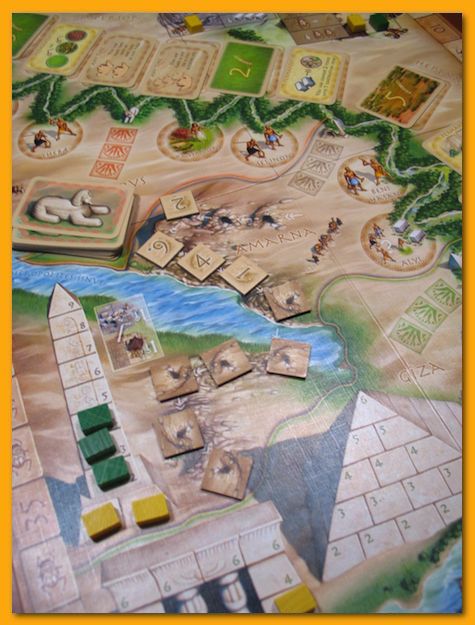 Blew the dust of Hansa too. I remember Lisa liking it and being pretty good. Seemed okay but I think it would be better with one more player 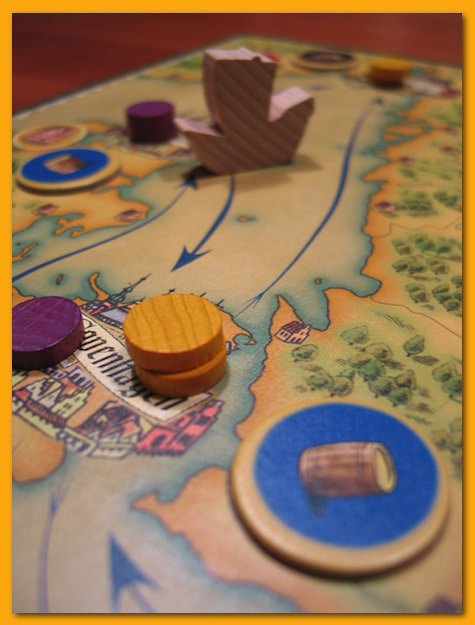 Lisa thinks she’s had her fill of Arkadia for a while. She said she felt like no matter what she did, I’d capitalize on it. She always felt on the defensive. 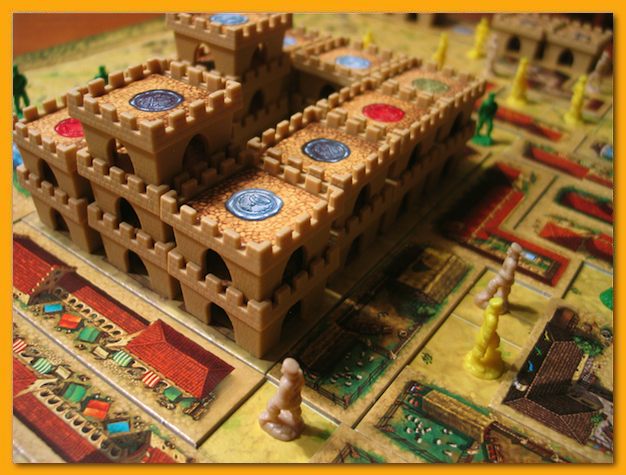 There were several days where we pulled out Drive for a few quick games when we only had a few minutes. 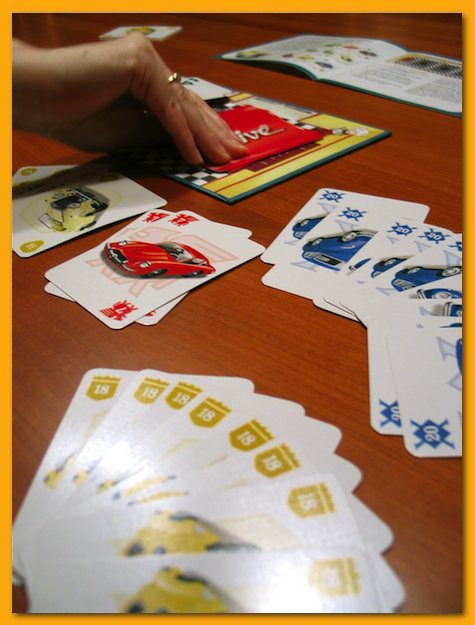 It’s been a very long time since we pulled out Torres. Lisa was confused about the tower movement and thought we needed to play again so that we (i.e. she) could play it correctly next time. 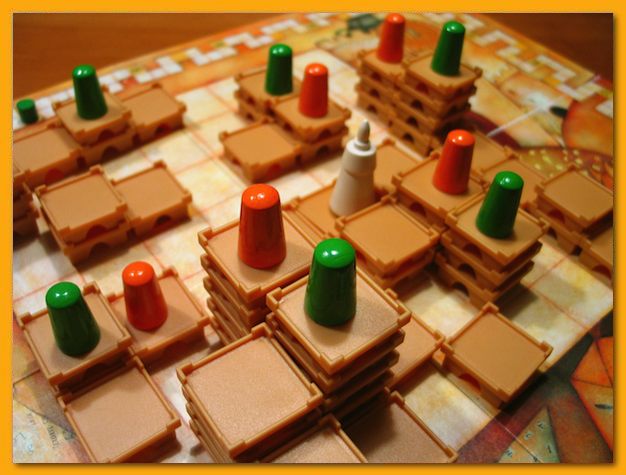 We played Balloon Cup 3 or 4 times when it got late and we wanted to make sure we’d played at least something on some nights. 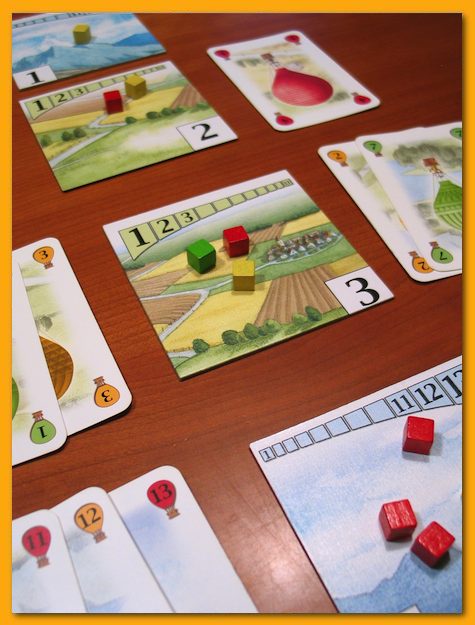 Caylus Magna Carta, the odd step-child of the box game. I’ve only ever played with two and would probably enjoy it more with more players. It’s okay but after 2 or 3 plays in May, I’m not overly keen on getting it out again any time soon. 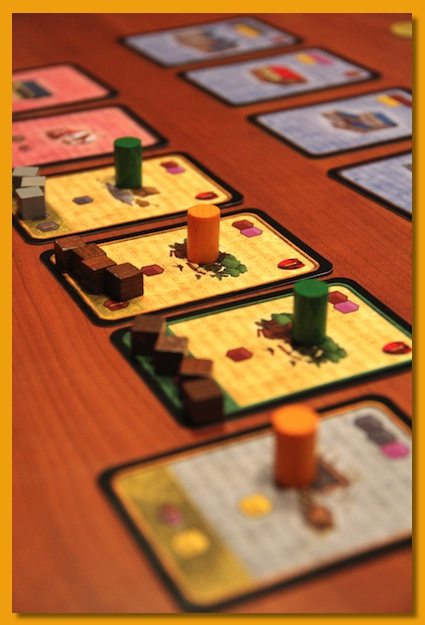 A thrown in image of a small chunk of my game cabinet after messing with a new camera. 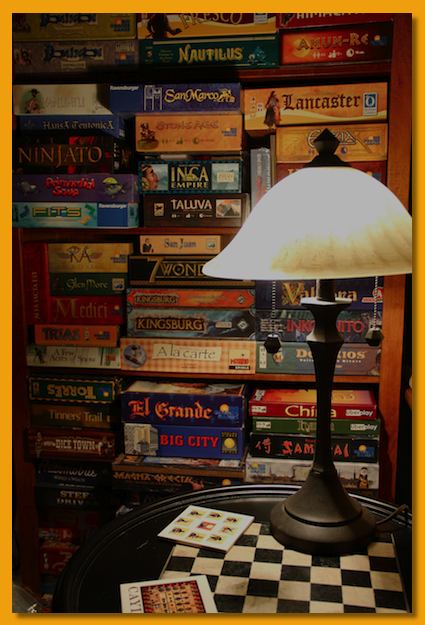 We were both tired and struggled through the rules to Fresco. It’s really not hard at all but we needed a second play to get the movement of the bishop right. Probably better with more players. A dummy third player always feels contrived. 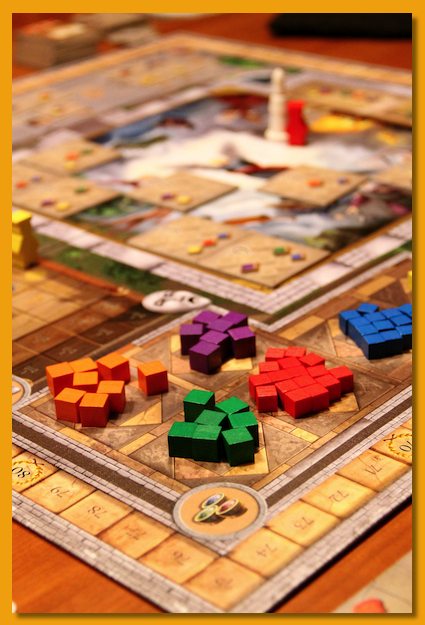 We had a few quick plays of Cities. No big brain burner here but not bad to pass the time. Very puzzly. 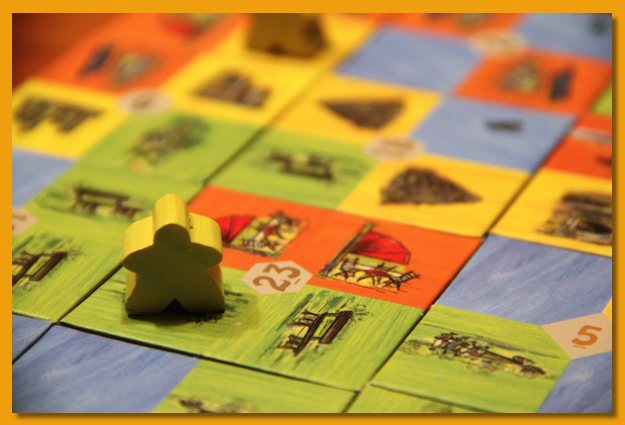 Lisa always kills me in Saint Petersburg and, like usual, she destroyed me this time. 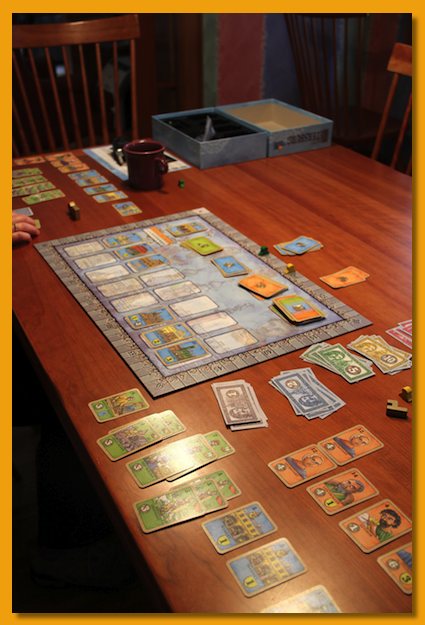 Aquadukt is another, activity-style game. We played 2 or 3 times when we only had 20 minutes or so. 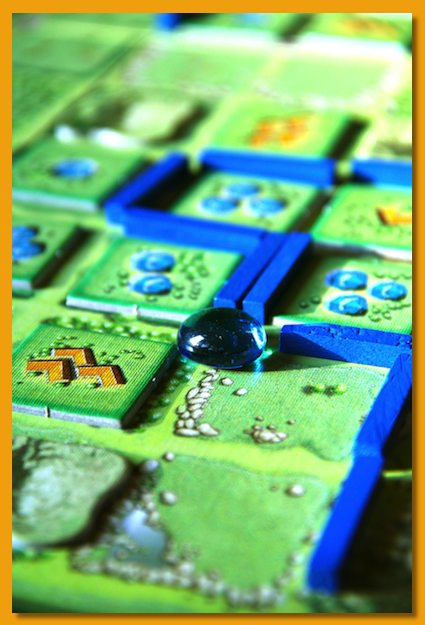 Taluva turned out to be rougher than I expected for Lisa. She didn’t like it for the same reason she didn’t like Arkadia. The spatial aspects were tough for her to work out and she always felt on the defensive. 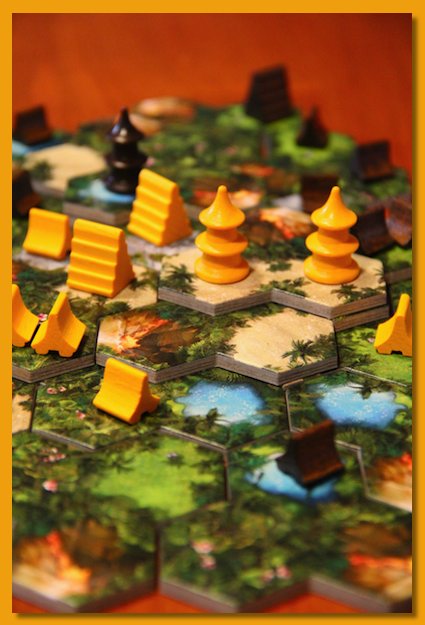 Pulled Carcassonne: The City and gave it a go. We used to play Carcassonne all the time and The City adds a bit more depth given the more complex wall scoring. We both felt it was a bit bland with two. 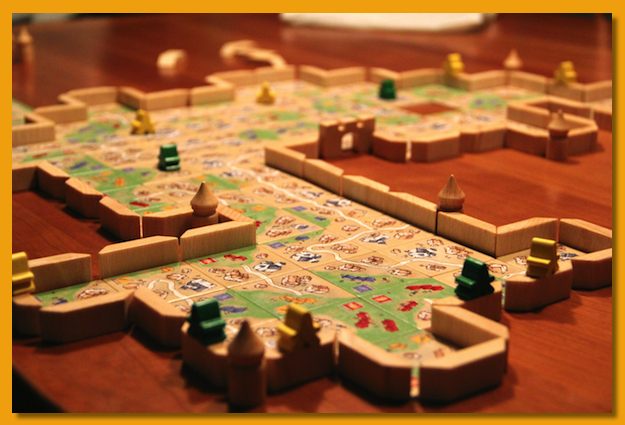 I’ve never been fond of Jambo. I don’t like two-player auctions and I always feel at the total mercy of the card draws. Lisa is usually quite good at it so I’ll play it now and again. 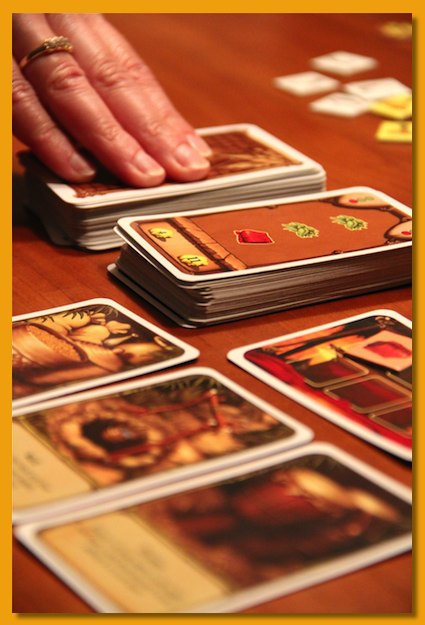 Lisa had played Notre Dame a few times in the past but we went through all the rules from scratch. Lisa liked it. The layout feels a bit odd for 2 with the additional two lobes of the city being in play only for the carriages but given the game is mostly a solitaire affair, it plays about the same with 2 as it does with more, excepting the gifts to Notre Dame. 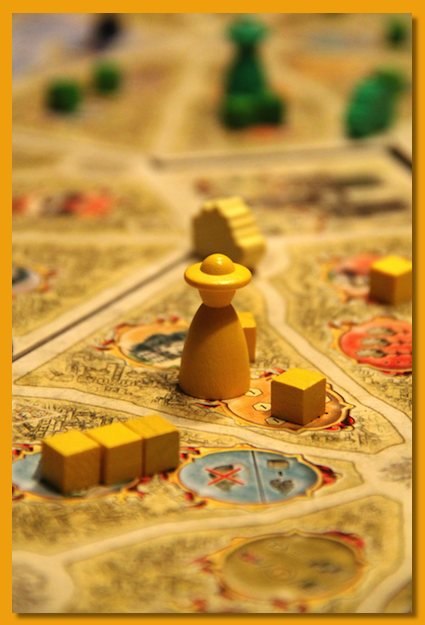 Blew the dust off this Big City and slogged through the rules. It’s really straight-forward but it always feels like there’s a lot to remember about the building relationships. Lisa didn’t particularly like it. It’s much better with more players though. 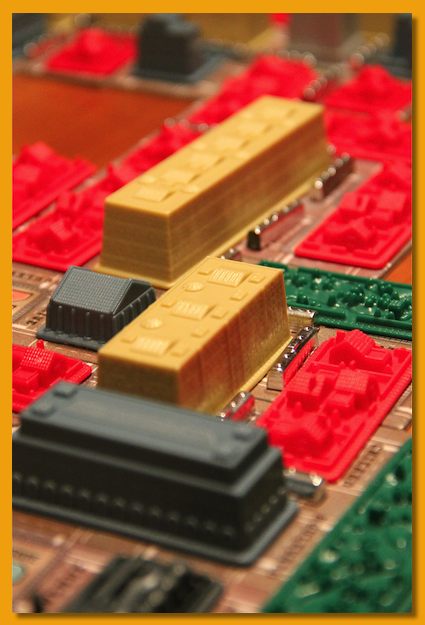 We played Masons twice, the first time we didn’t end the game when we were supposed to and in the second, we only scored one time in the entire game because both of us were dealt cards dealing with towers and walls NOT assigned to cities. Its ended up very boring. 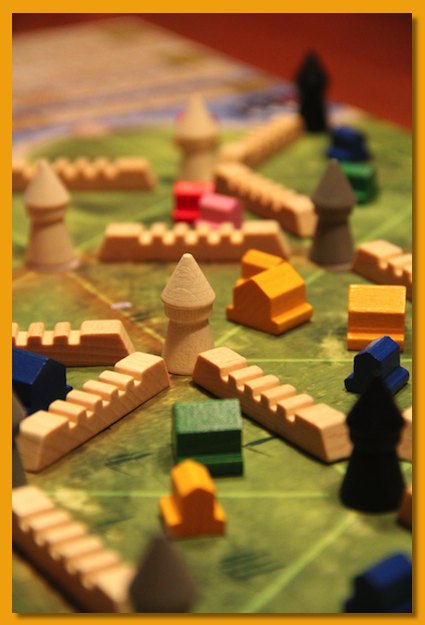 When I got out Dos Rios to take my tri-year image with my daughter, we decided to give the game a go. Meh, it’s pretty cut through at times and you feel less that you’ve won and more that you’ve simply survived more than your opponent. 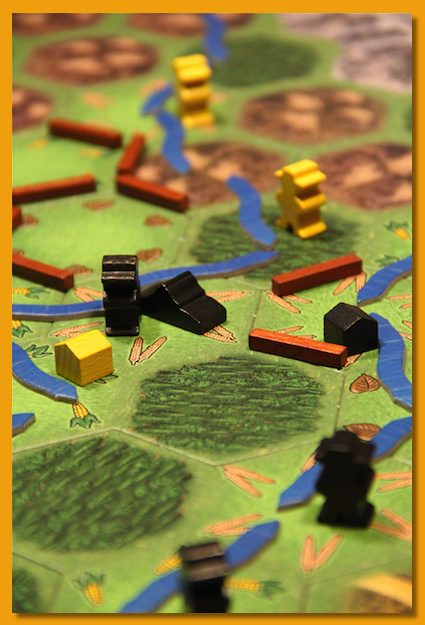 For my birthday, Lisa got me Stone Age: Style is the Goal and we played that a couple of times. Lisa is very good at Stone Age and gave me a walloping in the first and beat me soundly in the second. I just felt compelled to go for those new “teeth”! 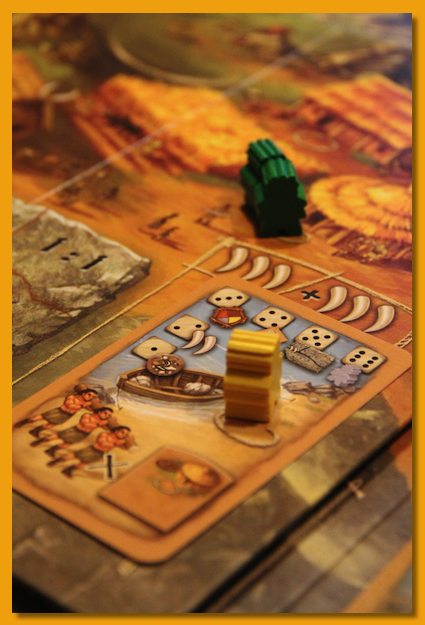 We played London twice and although Lisa didn’t have a double Omnibus, she managed to churn out money late in the game and crushed me when I ran out and could find no way to generate any. In the second, I drew Hospitals and Undergrounds like crazy and ran away with it. We’ll try the Ben-ZenLuca variant next and see how it goes. 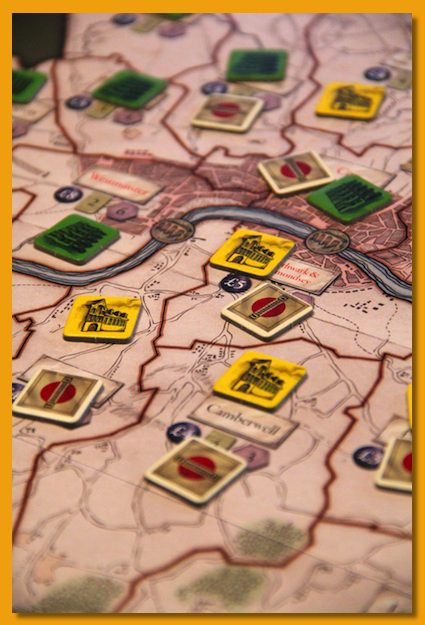 Lisa and I took a trip to Origin (more on that in another post) and we also spent some time with the designer or Morels. His wife taught us the game and helped us through our first play. We liked the game so much we picked up a copy and have already played three times. I’ll have more on that in another post. Check it out if you get a chance; it’s a fun two-player game! 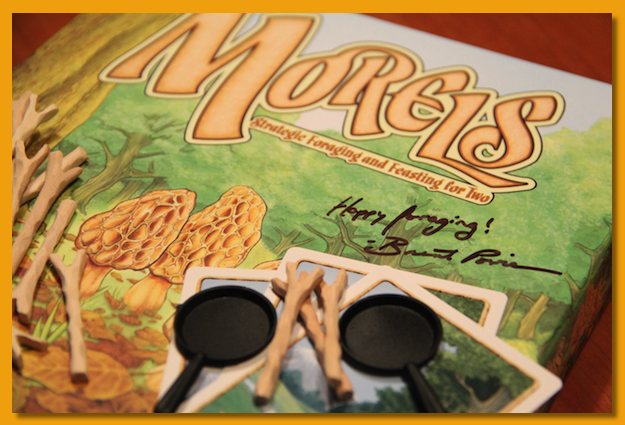 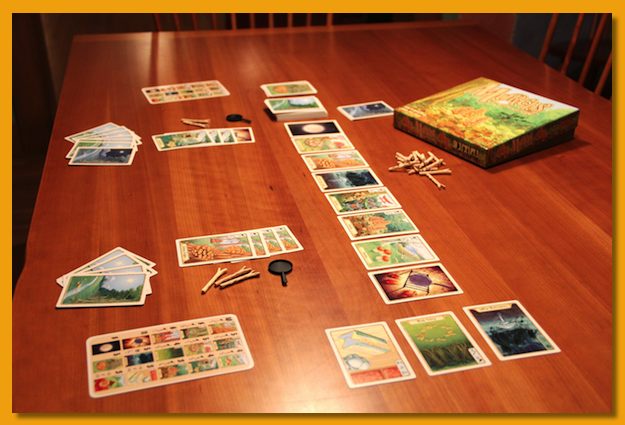