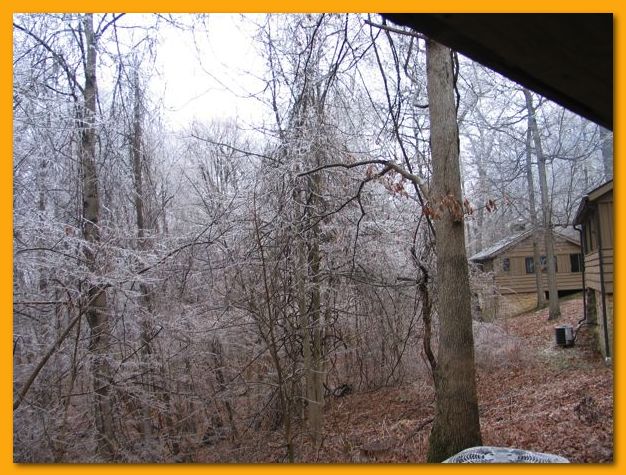 One has to reach all the way back to 2007 to find my last cabin-based gaming adventure. I’d made the offer to my gaming group to organize another cabin-con and with six of us we set out this past weekend to spend a few days in the wood-burner cabins at Lake Hope State Park about an hour and a half south east of Columbus.

Check-in was 4pm so I took off a half-day of work and carpooled with two others and arrived right on time. We grabbed the key cards, found the cabin, and started unloading. The weather was supposed to turn bad later that night so we rushed to get all of the games into the cabin before the freezing weather broke, but more on that later. 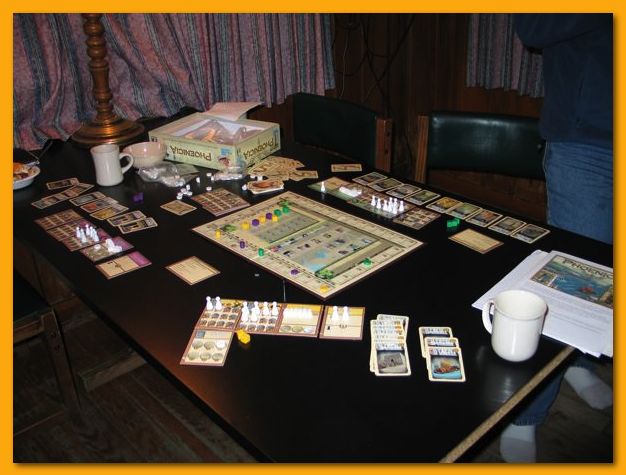 The three of us got settled in and started a game of Phoenicia and about half way through, the other three had arrived and after settling in, they started downing the chili we’d had warming in the crock pot. 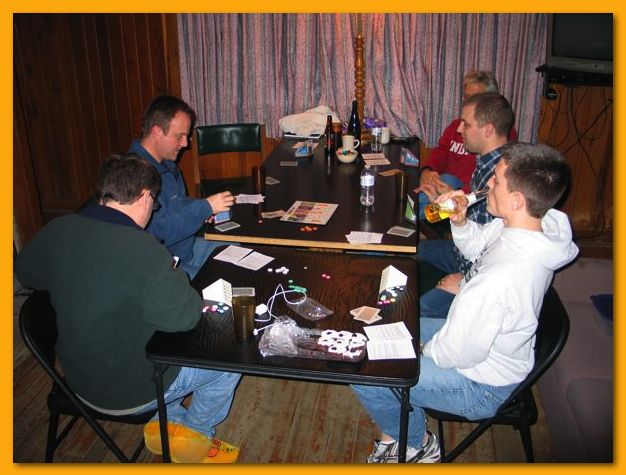 After dinner we grouped up for a six-player game of Modern Art. I’d not played it before so I was glad to finally get this older gem in my played column. 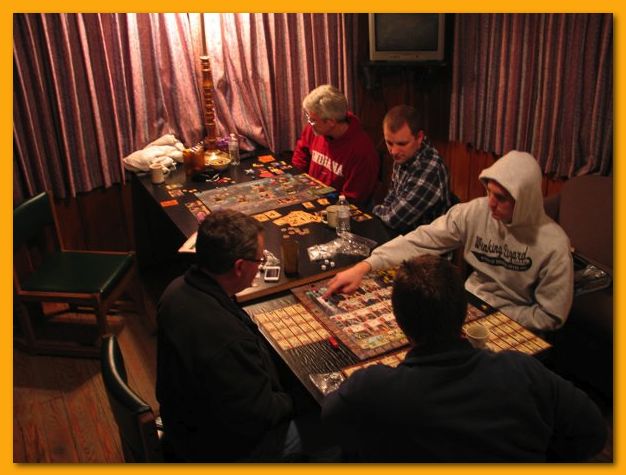 Since one of the guys brought a card table and chairs, we could split up for two three-player games. We pulled out Kingsburg and Ninjato. 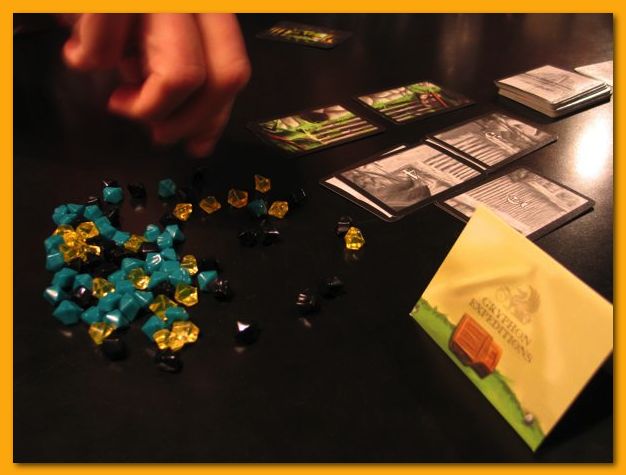 We came back together and finished off the night with Incan Gold. I slid into bed around 1:30 and since I was assigned to Saturday’s breakfast, I was planning on getting up around 7:30 to put an egg-caserole and cinnamon rolls in the oven so that it would done by the time everyone started getting up. Unfortunately, about 2:30am, the power went out due to the ice-storm and and by morning it was freezing in the cabin. Everything in the kitchen was electric so cooking anything for breakfast was out, and so I started trying to get a fire going in the fire place. The fire place is mostly cosmetic (no damper?!) so it really didn’t put out much heat but it was better than nothing. 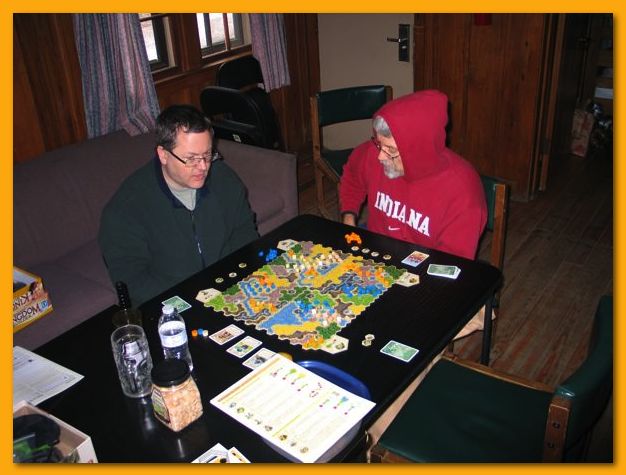 We ate fruit, nuts, beef jerky, and some other junk food for breakfast and while waiting for the power to come back on, I taught Kingdom Builder to a couple of guys that had not played it before. 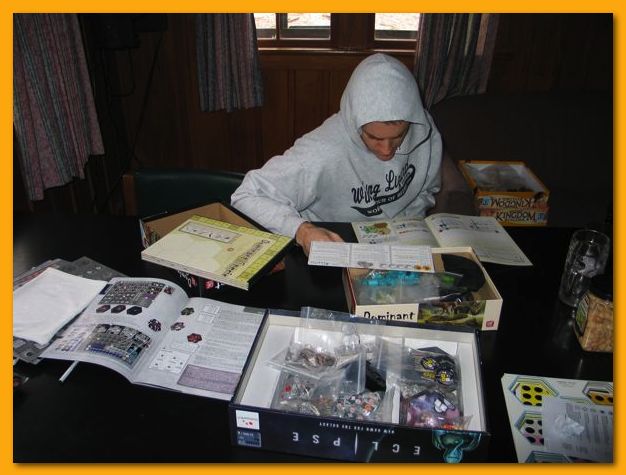 At the other table, two guys started going through the rules for Dominate Species and Eclipse. Cabin outings are great times to get epic games to the table but more on that later. 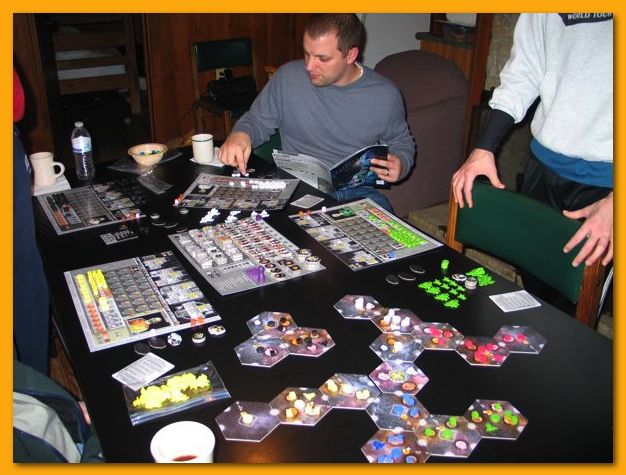 As a group we’d decided to take a stab at Eclipse and if the power didn’t come back on by 4pm, we’d pack up and head home considering the outing a big bust. We set up Eclipse and immediately realized that the rules were a bit more complex than the “teacher” thought and it took us a very long time to get the handle turning. As luck would have it though, around 2pm the power came back on and by 3 or so, we’d gone through a few turns, battled, lost, warmed up, and gotten enough of a feel for the game that we packed it up and decided to save it for another day. 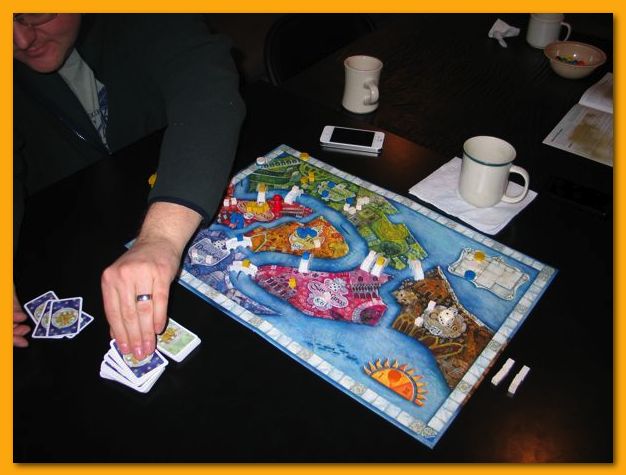 While one of the guys went out for a run (marathoner!) I taught San Marco to the three others and then sat out and chit chatted with another while he fixed lasagna for dinner. 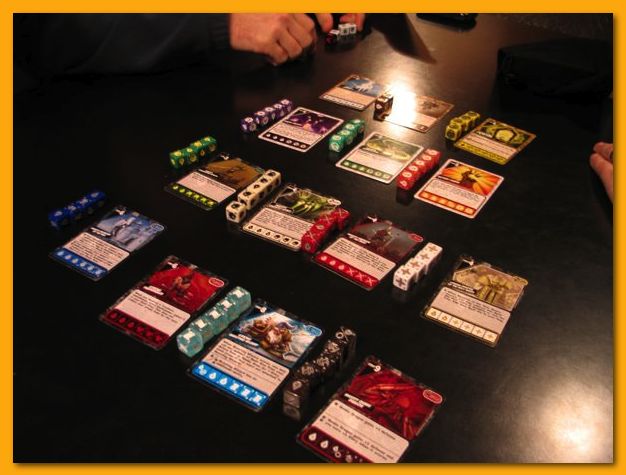 While lasagna was heating up, four of us sat down to a game of Quarriors and by the time we were done, dinner was ready. I don’t know if it was the cold night and morning or what but we all seemed to tuck into big slabs of lasagna and bread with abandon. 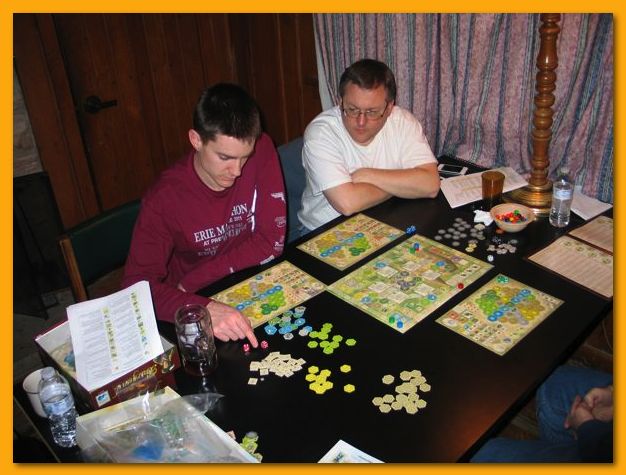 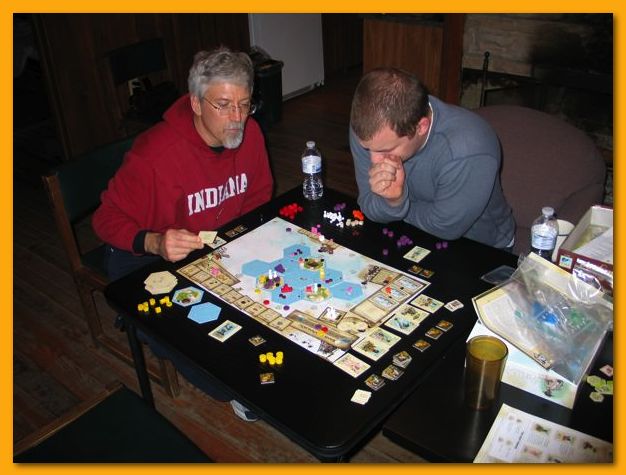 After cleaning up, we split up with one side of the table playing Castles of Burgundy and the other playing Vanuatu, one of my recent favorites. 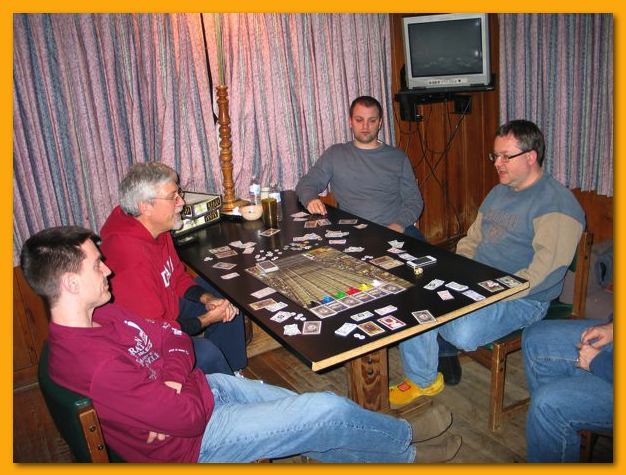 We finished the night with a six-player game of Horse Fever, another new title for me. A few of us thought long and hard about playing another light game but knowing we had to fix breakfast, clean up the cabin, and be out by 11am, we probably made the right decision and headed to bed.

I always have a lot of fun doing these cabin-con outings. This group of guys made it very easy to coordinate and everybody pulled their weight on food, cleaning, etc. I’d love to make it a yearly event but I’m not sure my group could swing that. Our ages are diverse ranging from empty-nester, high-school, middle-school, elementary, and new born so successfully organizing and pulling off an event like this is not much short of a miracle. I feel we got lucky that, even with the weather, it worked out well and I had a really great time. Before I knew it, it was time to pack up.

Thanks guys for sharing your weekend with me. Let’s do it again soon.