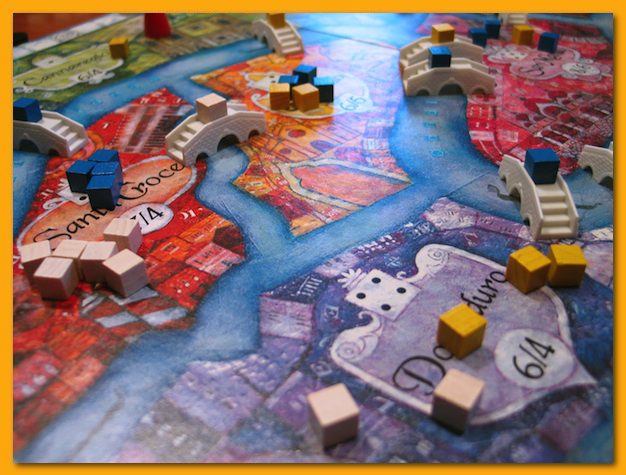 I held a mini game night at my house yesterday and although it was cut shorter than I’d hoped we did manage to get in a game of San Marco, K2, and Kingdom Builder.

After playing San Marco at Great Lakes Games this past November, I looked for a trade on BGG and scored one for a copy of The Downfall of Pompeii that I’d gotten in an earlier trade. Primed and ready to play my copy, the three of us sat down and after a quick rules refresher we got started. San Marco is, at its core, an area majority game. You’re trying to get cubes into different areas of the board in numbers sufficient to get first or second place (simply majority) when the area scores. However, the interesting aspect of the game is the mechanism that allows you to place cubes, build bridges between areas, manipulate cubes in the regions, and score them. A player draws a number of cards, some good/some bad, and divides them into three piles. Other players choose a pile and the player who split the cards gets the last remaining pile. As players choose a pile they take the actions the cards afford.

In the end, you want to maximize the number of cubes on the board diversified in as many areas as possible in sufficient numbers to score points for first or second place. It’s a relatively simple game but there can be some down-time while players allocate the cards into piles and while players choose a pile and take their turn. However, it’s a fun game and has a nasty cut-throat angle to it which, depending on your opponents, can be fun if not taken personally. 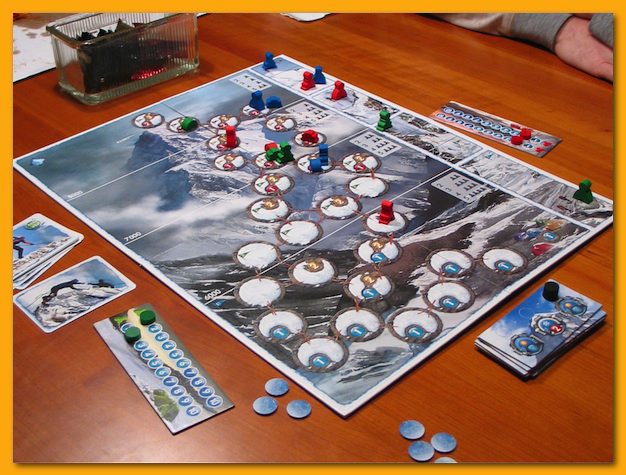 Next up on the table was K2. We slipped on the polar fleece, grabbed an extra lung, and set out trying not to die on the mountain. Each player holds a matching deck of shuffled cards and choosing three from 6 drawn cards, tries to move their two hikers up the mountain paying the up/down movement costs and protecting them from the negative effects of altitude and bad weather (negative “lung” points). There’s a bit of a push your luck aspect to the game (should you for one step higher in hopes of drawing enough lung point cards to save yourself) and enough randomness in the cards to make it a fun romp rather than a strategy game. I took the risk and went for the summit and paid a high price with the death of one of my climbers drawing all movement cards and no lung cards. Later in the evening, I had a moment of silence for my little wooden friend. 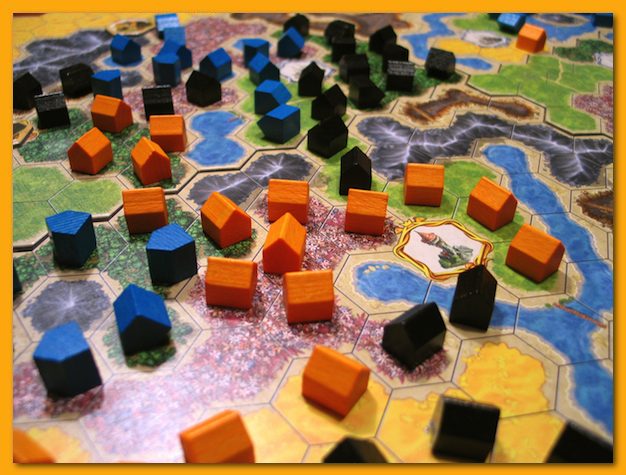 Last up was Kingdom Builder. Two of us had played several times and although we like to play new games, we didn’t have a lot of time and we wanted to introduce it to our third. I felt behind the 8-ball the whole game not really able to go anywhere but where I was forced to go based on adjacency. I only managed to get two special tokens by game end and came in a distant third. Ah, c’est la vie. The nice thing is that the game is short and you can quickly turn it around for another shot at the winner’s circle.

My wife just took a call from a neighbor inviting us over for some games tonight so look for another session report soon.