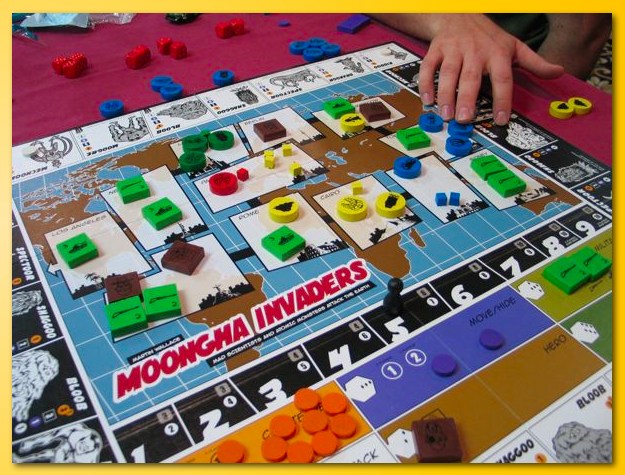 Getting out of bed on Saturday morning was rough. I got up late and after grabbing some breakfast I sat down to a game of Moongha Invaders, an odd Martin Wallace game of monsters invading cities around the world. It’s a pretty light-hearted battle game with some recognizably eurogame mechanics. From what I understand there were only 600 copies of the game made so they go for crazy amounts of money. I’m glad I got to play it and the collector in me would like a copy but I suspect it wouldn’t see a lot of play time. 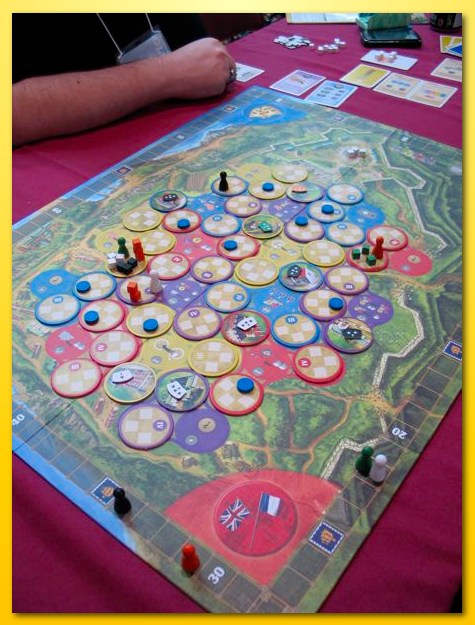 Quebec was another game on my must-play list and although I liked playing it, I’m wondering if I should buy it or not. The game lasts four rounds and players try to build buildings by contributing cubes (workers) to the construction process. Once a player leaves one building and starts building another building, the contributed cubes move to regions of the board where a round ending majority scoring process takes place. There are lots of other things going on but it’s basically an area majority, cube pushing game. 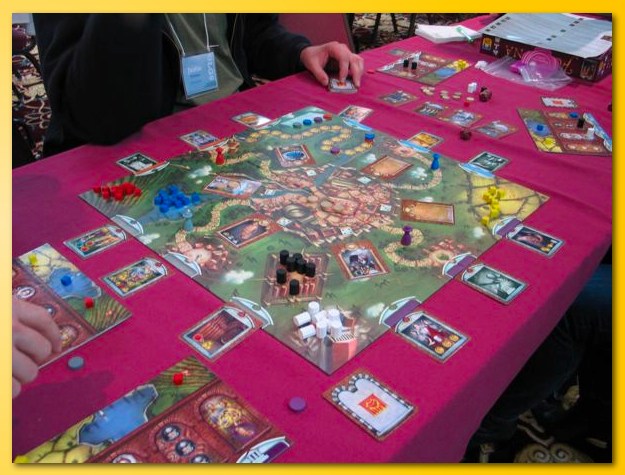 Next up was Fortuna. I wasn’t fond of the game but it’s rated relatively high on BGG. It’s not that it’s bad per se but there’s just not much to hang your hat on. Players attempt to take the actions on a limited set of cards in order to move a pawn up a track. Move far enough and you trigger the end game. There are cubes, cards, buildings that afford players special actions, dice, and various other things but it all seemed a rather bland game. The artwork is awesome but the game…meh, not so much.

I participated in the annual GLG prize table and managed to walk away with a copy of Ninjato. We’ll see how it goes.

I was involved with several lighter games as the night went on including Bottle Imp, Kingdom Builder, Maus au Chocolate, Dicetown, and closed the night with the card-game form of Keltis (a semi-reswizzled form of Lost Cities).

Thanks to the time change, it’s now only 2:30am so hopefully I’ll be able to get up in time to still get breakfast in the lobby. I’m looking to grab a least one more short game tomorrow morning (so that I can claim to have played more games this year than last) and then hopefully stay awake for the three hour drive home.