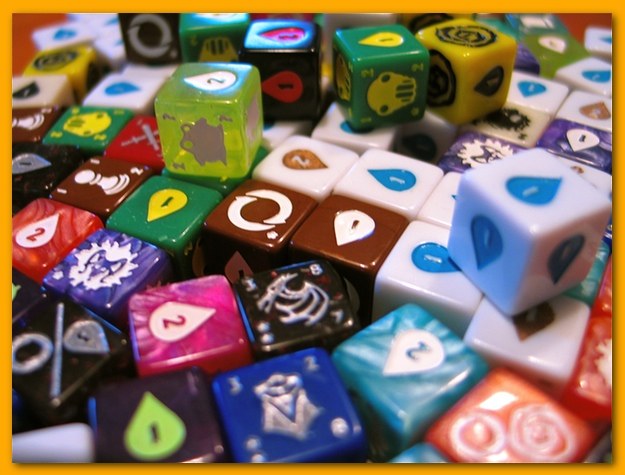 When I heard about Quarriors, I had to get a copy for my collection. The game comes in a dice-like tin filled with a few cards and 130 custom dice. Yep, 130! If you’re familiar with Dominion you’ll quickly pick up on this “deck” building game.

Each player gets a bag and a few starting dice that act much like your fixed initial hand in Dominion. On your turn you draw a few dice from the bag, roll them, and use the “money” (Quiddity) to purchase more dice from the table to add to your bag. This purchase from the “wilds” parallels what happens in Dominion as well; instead of cards, you buy dice and anything you buy goes directly into your discard pile. In addition to your one buy, you also can use some of the money to summon creatures, attack other players summoned creatures, and cast spells that can help you attack, defend, and/or earn more points when you score. If at the beginning of your turn, you still have some creatures in play (they weren’t defeated) then you can score them and put them in your discard pile. Some dice allow you to re-roll dice and others allow you to draw additional dice from your bag for this turn. Again, like Dominion, when you can’t pull the dice you need for your turn out of the bag, you throw all of the dice in your discard pile into the bag, mix them up, and continue drawing. 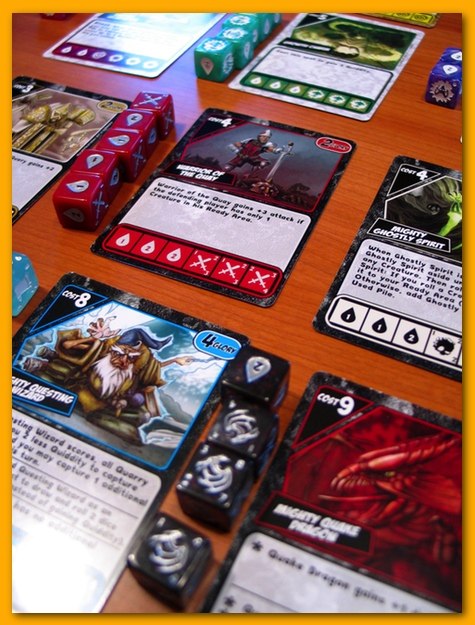 Each game is very different in that the dice available for purchase and what each die does changes from game to game. Before the game begins, three starting cards (in every game) are laid down, and three Spell cards are drawn randomly from the Spell deck, and seven Creature cards are drawn randomly from the Creature deck. 5 custom dice match each type of Spell or Creature so players find the appropriate dice and put them next to the cards, and the game begins. There are several cards of each type but the cards assign different features/actions for the faces of each die. This variability in the “wilds” makes the game very flexible. The expansion possibilities are almost endless with the first already in the works. Rise of the Demons adds 20 new custom dice and 19 new cards that introduce corruption mechanisms allowing players to sour other opponent’s decks to slow them down or to just be a trouble-maker.

I like Quarriors but I do have my complaints. Besides the overly small bag, I thought I’d enjoy the lack of shuffling of the Dominion deck but you gather so many fewer dice in a game it never feels like you’ve amassed much of a deck. You just don’t get that constant touchy-feely with your deck that you do in Dominion. In Quarriors your points don’t pollute your deck and when you score, the game allows a culling operation which helps players sweeten their deck. I always feel like I don’t go through my deck enough times to offset poor dice rolls. Numerous times I’ve purchased a Creature only to have it always come up on the money side every time I roll it. At least in Dominion you can be guaranteed that if you buy a card, when it comes up in your deck you can count on it being functional.

Quarriors is lighter with less decision than Dominion so it does make for a fast romp. If you’ve had a bad string of rolls, don’t sweat it. The game is over so fast you can try again on the next game. I’m looking forward to the expansion and to see what depth it adds.