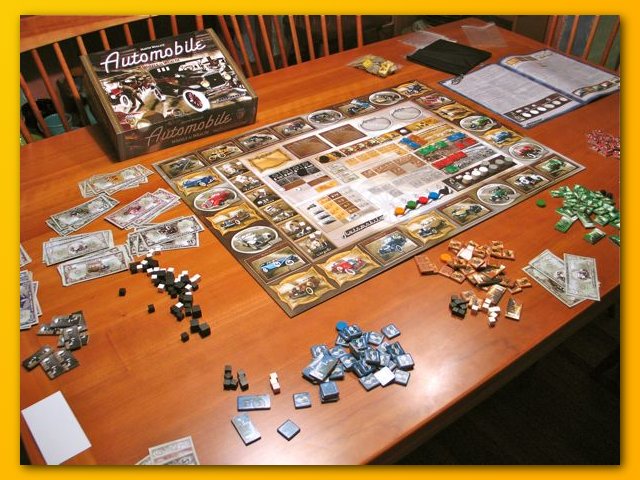 Over the last couple of nights I’ve been reading through the rules and boning up on Automobile. It’s a relatively heavy game (for me) that pits players in the early days of the automobile business in an endeavor to make the most money buy building the right number of factories in the right locations, hiring the right number of salesmen and allocating them to the right models, manufacturing the right type and right number of cars to meet demand, and knowing when to cut your losses and shut down older plants. The game is ruthless to risky players that end up outproducing demand or underproducing with too many salesmen as well as those that play overly cautious. The winner will be the player that plays just risky enough. It’s difficult to get a good feel of the game playing a few solo turns since some of the information is supposed to be hidden (i.e. total demand) but I can see that I’ll like the game once I get a chance to introduce it to my group.

Automobile is designed by Martin Wallace and seats 3-5 players. The listed play time is 2 hours so I’m sure that in my group, that first game will drag out to about 3. I am however, looking forward to it.

In a recent game order I received a copy of Glen More, Automobile, Qwirkle, and Fairy Tale (thanks Game Surplus!) and when I opened the shipping box, my daughter reached in and grabbed Qwirkle, turned it over in her hands, and asked if we could play it.

My daughter used to be my gaming buddy, helping me go through the rules of a new game, organizing and bagging bits, playing a few sample rounds, etc. but as she’s gotten older, she’s focused more on iPod Touches, friends, driving, photography, Facebook, boyfriends, etc. I always feel a little pang of nostalgia when I see her go off and do something else when we try to organize a family game night so when she asked to play Qwirkle I immediately said yes and had her open the box and we started reading through the rules. 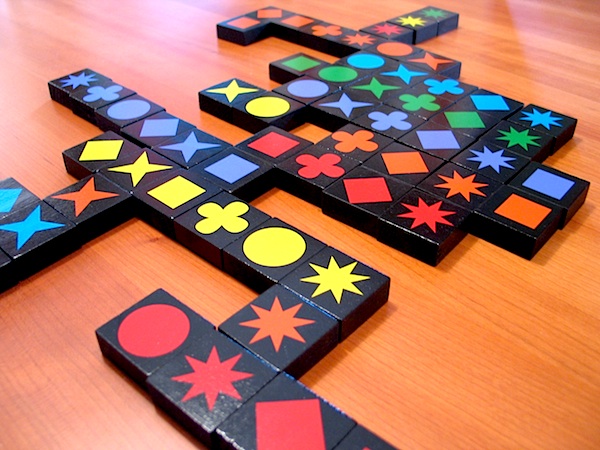 Qwirkle was a 2011 winner of the coveted Spiel des Jahres Game of the Year (albeit a controversial one) among other honors. It accommodates 2-4 players for about 45 minutes depending on how much time and effort you put into maximizing the points on your move. It firmly sits in the family, light gaming, arena but I must say it does heat up the brain a bit trying to figure out those great moves. It feels a bit like a lighter form of Ingenious with simplified scoring, no limited board size, but more restrictive tile placement rules.

The game comes with a linen bag and 108 wooden tiles and a set of rules. There is no board. The tiles depict 6 different shapes (diamond, circle, square, star, starburst, & clover) in 6 different colors (blue, red, orange, purple, yellow, & green). There are three of every tile (e.g. three green squares, three yellow circles, etc.) Players draw 6 tiles and place them in front of themselves keeping them hidden much like a rack of scrabble tiles.

A turn has two phases: 1) playing 1 or more tiles to the table or discarding 1 or more tiles and 2) refilling your hand back up to six tiles. If you are discarding tiles, as a last step you put your discarded tiles back in the bag. When playing tiles to the table, the tiles you place on your turn must share attribute (shape or color) and you must place them in the same row or column of the grid on the table in the same connected cluster and that cluster must also share the same attribute of the tiles your are laying. However, you are not required to have all of your tiles touch each other. In other words, you are allowed to split them as long they end up in the same row or column and they end up in the same connected cluster of tiles. A further restriction limits any clustered group from containing a duplicate.

Restricting a cluster from containing a duplicate tile means that the maximum length of any cluster will be six. For example, if the shared attribute is color (blue), then the longest chain/cluster would contain blue tiles each with one of the six symbols. Any additional blue tiles would duplicate a symbol. If the shared attribute is the shape, then the maximum cluster could not contain more than the six different colors without having a duplicate.

There are two ways to score points, after laying your tiles, you count in the four directions out from any new tiles you lay and simply count the length of any chains you’ve added to. If you make a row of three tiles extend to five tiles by laying two more tiles, you’d score five points. If on that same move one or both of your tiles makes a column longer you’ll also receive those points as well. If you manage to place a tile that includes the sixth tile in the group you earn a bonus of six points, a Qwirkle!

I’ve played a few times now with different numbers and I think it plays best with two or three. With four, although still enjoyable, play seems a bit chaotic as a lot can change by the time you get to play again. I’ve also had luck introducing the game to a group of neighbors. It’s easy to teach given a few examples and it’s a bit deeper than you’d think at first blush. The neighbors exhibited a few groans when fellow players “took their move” so there is a bit of conflict. There are two ways of playing where you can play with the hope of lining up subsequent plays (by trying to align tiles in disconnected tiles in rows or columns so that subsequent tile play can join them with some common attribute), or defensively where you play to block Qwirkles by preventing a tile from being placed in a spot that would join clusters that don’t share a common attribute.

All in all, I like the game for what it is and think it’s a great game to have on the shelf for those light gaming situations where you might not want to pull out Ingenious or Carcassonne. 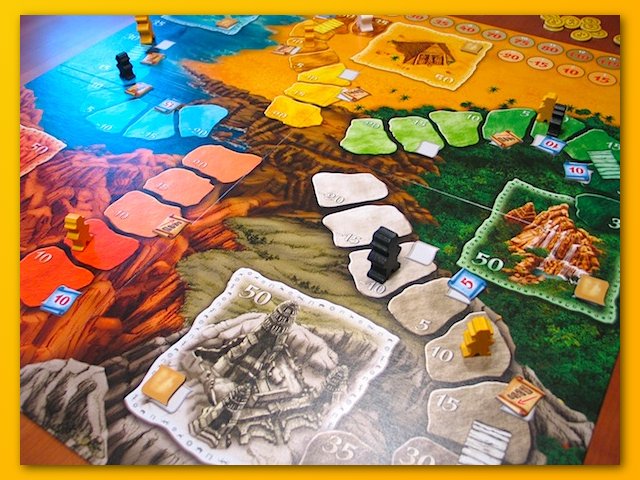 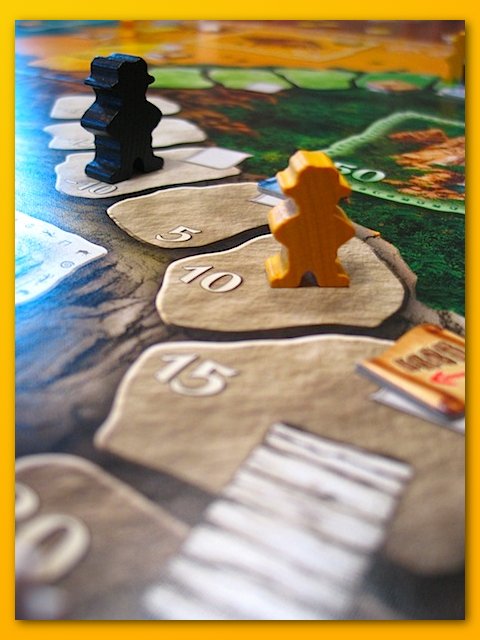