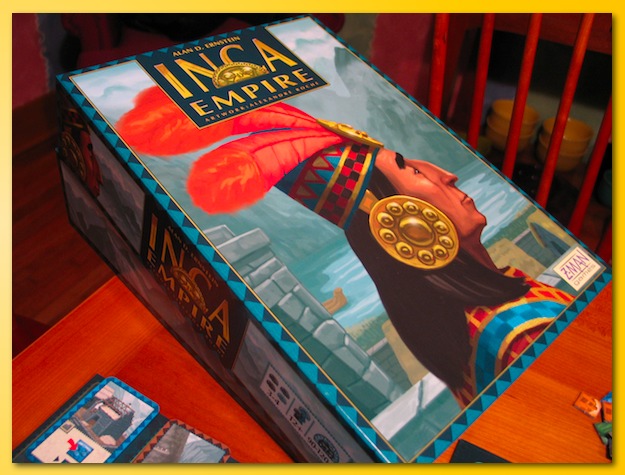 I was lucky enough at the 2010 Great Lakes Games to pick up a copy of Inca Empire from the prize table. There were three copies available but I started to get a bit worried that they’d all be gone by the time my name was called but I was very excited to be able to grab the last copy when my name was mercifully drawn.

Inca Empire is a game for 3-4 players that lasts about 90 minutes depending on which variants you choose to play with. The game comes with some built in modifications for shorter games if that’s more to your liking. The game is considered a reimplementation of the game Tahuantinsuya but but since I’ve not played it I cannot comment on the differences.

The artwork of Inca is superb and it’s what originally caught my eye when scanning through the recent geeklists on Essen games. The bits are well made and very brightly colored. The roads “sticks” are very small but the tight board makes that a requirement. The box comes chock full of thick cardboard chits in various shapes and sizes representing, cities, terraces, garrisons, culture markers, and labor (people). There are numerous chunky wooden yellow temples, and more road sticks than you can, well, shake a stick at (240 in all). Top that off with a very nicely done board, a small satellite board, a small deck of cards, and a few more bits of various kinds and you’ve got a very full box. My only gripe is with the iconography of the cards. After your first game, you’ll know them well, but you’ll need the rules close by to understand what each “sun” card means for that first game or two. 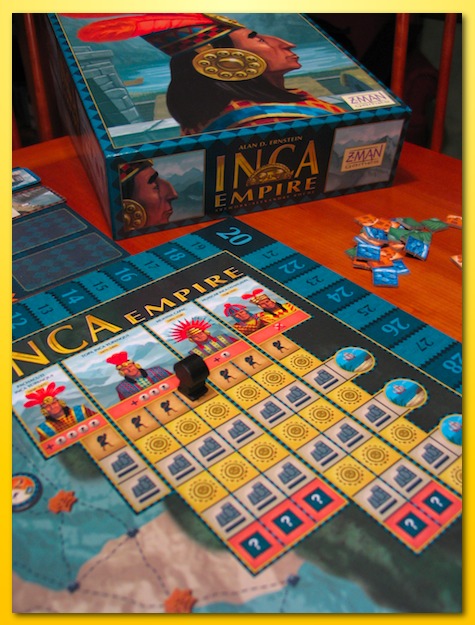 At a high level, Inca Empire is a route/network building game. Players represent Incan leaders “Apu” that wish to expand their influence on the regions that surround the ancient city of Cuzco. Players earn points for conquering territories, building garrisons, cities, temples, and terraces. There is no direct conflict between Apus (you’re all trying to make the Incan Empire stronger) but the more structures your network connects to (whether you were the original builder or not) will determine which player will shine the most brightly in the eyes of the divine ruler, the Sapa Inca.

The individual steps of the game are tracked using the the Era Track shown above. This track is divided, vertically, into 4 eras indicated by the large images of Incan rules depicting different eras of the Inca civilization. Each era is subdivided vertically into one or more rounds represented by a column within a given era. Each column is further subdivided into phases, where each phase is depicted by icons representing the following phases: Inca, Sun, People, and Sapa Inca. A large wooden Inca figure stars in the upper left and moves top to bottom, left to right, through the era track until reaching the final bottom phase of the last era.

Player colors and their corresponding starting positions (dictated by the map) are randomly assigned and a road (a stick of the appropriate color) is placed extending from a fixed starting position in Cuzco. Each round follows a pattern with the first phase (the top item), representing the number of labor tokens you receive at the beginning of the round. I equate the labor tokens to the money of the game. You get money, and then you get to spend it during the round as the marker moves down through the various phases of the round. When it hits the bottom (the Sapa Inca phase) you score the value of your network that you’ve built. In between getting your labor tokens and scoring, are alternating phases of playing cards and then building. Some rounds have more or less card/build phase pairs but the pattern is always the same (excepting the first round which no cards exist). 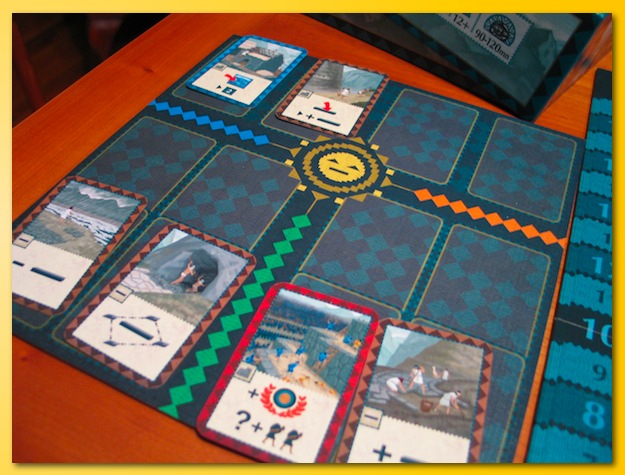 Players are dealt a hand of three “sun” cards at the beginning of the game and during the card phase, players get to choose a card from their hand and place it on the satellite board. The player in last place gets to place her card first followed by the next player, etc. This small satellite board (the Sun Event board) is divided into quadrants separated by the colors for each player. Laying a card in a quadrant exposes the two players whose colors are adjacent to the card to whatever effects the card depicts. The sun cards depict positive and negative impacts and last throughout the entire round. Some cards may make it easier to conquer new territory, other cards may cause roads to be destroyed, or to make it more difficult to build a city, etc. Multiple cards played to the Sun Event board have a cumulative effect so as they build up players must choose wisely between positive cards and negative cards and to whom they should apply. Every card played affects two players so there are some tough decision to make.

After the card playing phase, players enter the build phase of the game. This is the real meat of the game where players got to perform two things in either order: placing up to two roads followed by “building” something. Placing two roads allows the user to put two sticks on the roads that lead from his starting position at Cuzco. Branching is allowed but you must always remain connected back in a continuously linked road back to your starting area at Cuzco. 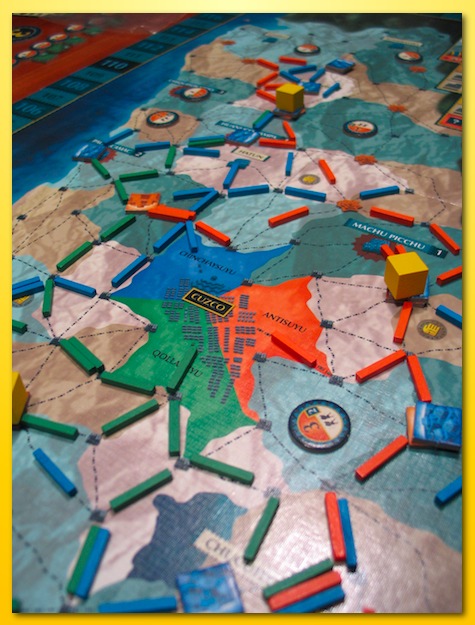 The map is broken into small territories riddled with roads and settlements. Each territory contains a culture token of unknown value (face down) that becomes exposed (turned face up) whenever a neighboring territory is conquered or a road becomes linked to the border of the territory. The culture token represents a resistance value, a number of points, and an indicator of the number of labor tokens you will receive in addition to your normal allotment at the beginning of the round. Road placement rules dictate that you can only build a road segment into an unconquered territory if one end is connected to the border of a conquered territory so you’ll need to conquer some territories to keep building your network.

The build phase of your turn allows you to perform one of several actions: conquer a territory, build a garrison, build a city, build a temple, build a terrace, or build an additional road. All of these actions require you to turn in various numbers of labor tokens (spend your money) and your ability to earn more labor tokens each round is based on the value of the culture tokens of the regions you conquer. Conquer more territories and you’ll get more labor tokens to spend. However, the more time you spend conquering, the less time you’ll have to build the other items allowed in this phase. In most cases, conquering a territory also earns you victory points as does building the other items.

However, you must keep in mind that there are multiple building phases each round and the sun cards can greatly affect what you’re capable of accomplishing on your turn. You may retain just enough labor tokens to build a city on the subsequent build phase only to find that someone has played a card that requires an extra one or two labor tokens to build a city thwarting your hopes and dreams.

At the end of the round, you score the value of your network earning points for each item your network connects to. You’ll earn these points repeatedly each round so building up quickly and getting connected to the structures built by your opponents is key.

At the end of the scoring round, the cards are wiped from the Sun Event board and the next round begins. There’s an opportunity for turn order to change at the beginning of every Sun Card phase as well as a catchup mechanism at the beginning of each round requiring the leader to pass earn labor tokens to the player in last place (giving them more “money” to use during the turn).

The number of “free” labor tokens decreases each era which also indicates how many can be carried over from one round to the next. By the final round, players receive zero free labor tokens and must endure a grueling round of four building phases using only the labor tokens earned from conquering regions earlier in the game. The final Sapa Inca phase scores the final structure of each players network and the player with the most points wins.

I’ve enjoyed my two playings of Inca Empire and look forward to more. The game comes with a set of four “invasion” markers, three depict ships and one depicts Pizzaro. These tokens are placed randomly face down, next to the final four build phases and after each phase, the token is turned face up. If the token depicts, Pizzaro, you jump immediately to the end game scoring skipping subsequent phases in this round. The gamer in me feels that that’s a bit lame having a variable and surprise ending but it does fit the theme well and can cut short an otherwise relatively mechanized final round.

I enjoy the nifty cooperation aspects of the game where players vie to build roads to stay near other players so that they can easily connect to the structures they build (earning points during the scoring phase) while trying to build farther away to keep others from connecting to their structures. A player left to their own devices will most likely wither and come in a distance last. You’ve just got to connect to other players to earn points quickly and blocking is next to impossible (there are cards that let other players build roads where roads don’t exist on the board or to share existing roads with other players). The game is relatively chaotic and the randomness of the cards does reduce the pure strategy but it doesn’t seem to take the fun out of the experience for me. I highly recommend the game and look forward to my next play.