Great Lakes Games 2010 is a wrap and I’ve got the post board game convention blues. But I’m already thinking about next year. Dave Vander Ark has, again, done an awesome job with setting up and running the invitation-only, three-day gaming extravaganza. Thanks Dave and kudos for a job well done!

I arrived on Thursday afternoon and although it was still relatively early there were numerous tables with games already in progress and the tables around the walls were starting to fill up with games. I unpacked the games I brought helping to form the communal library, checked in my games for the prize table, and within minutes I was sitting down to a game of Macao for three. 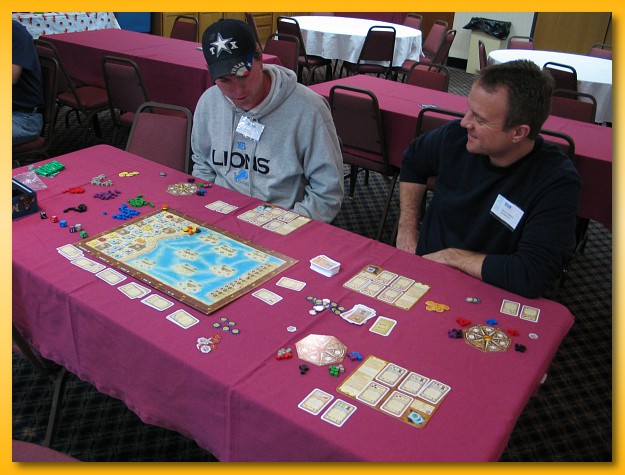 The first time I played Macao it flowed slowly and I was a bit worried about the downtime. However, this time it flowed nicely without the dreaded analysis paralysis kicking in those last few rounds. Macao is a bit of mish mash of mechanics but they all seem to work pretty well. Although there are ships to sale around and an attempt to layer on a theme, the game is pretty much about allocating dice to get cubes to “buy” cards that let you you chain together actions to earn points. 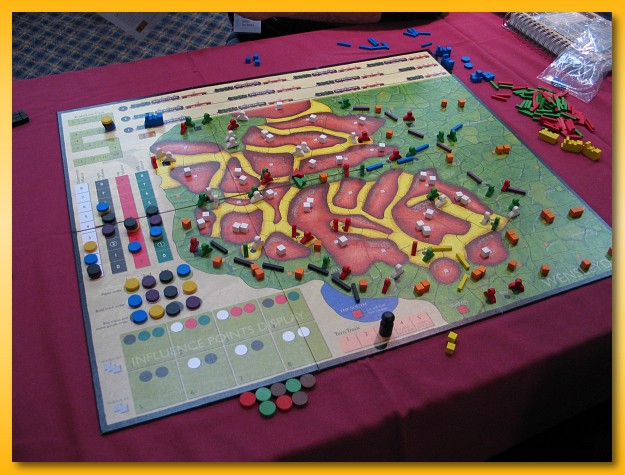 We picked up a 4th player and launched immediately into a game of Last Train to Wensleydale. I’d always heard it was a pretty good game so we went into the rule book cold. Like wading into ice water it was a bit rough but we persevered and came out on the other side better gamers for the ordeal. Like most Wallace games, the setup is a function of placing cubes into regions using some structured randomizing technique. Played on one of the most grotesque boards imaginable, the game actually plays pretty well. Although the word train appears in the title, it’s not really a train game in my opinion. The lightly themed game is really about penetrating the interior of the board to build routes to pick up resources while behind you the big train companies are gobbling up the track. If you like variable turn order, this Wallace title has it in spades feature three (!) turn order tracks for you to monitor. All in all a worthwhile endeavor to play but getting through the rules was a bit tough.

After a break for dinner we launched into a game of Egizia, one of my favorites. This was my 3rd or 4th playing and it’s still a fun time. The basic worker placement mechanic coupled with the nifty placement restrictions and the card collection mechanics make for an all around enjoyable game. 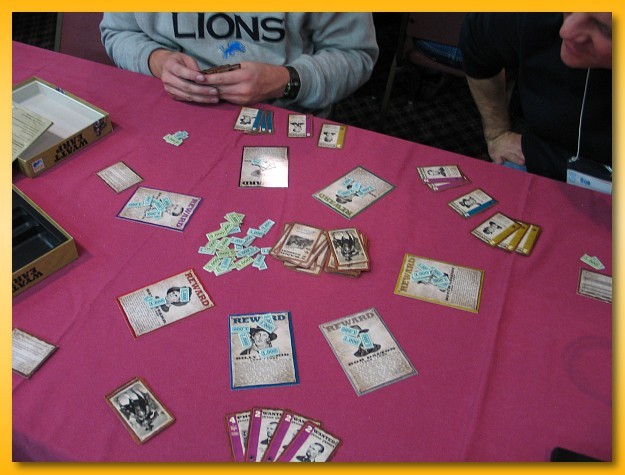 Not wanting to stay up too late, we played a quick game of Wyatt Earp. I’d recently picked up a copy in a BGG auction and was itching to play. Wyatt sits firmly in the filler category but at the heavier end. This light set collection game features card drafting in an attempt to play sets in strong enough numbers to both capture the outlaws and too capture the lions share of the reward. It’s light and almost plays itself but would make a great closer on game nights. 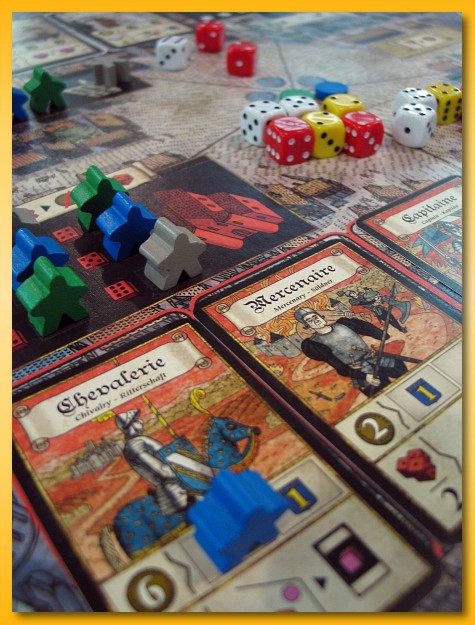 On Friday morning, my gaming buddy Bob and I sat down to read through the rules to Troyes. Talk about confusing. Even after having someone walk us through the rough mechanics we still felt the need to start at Page 1 and step through word by word…pretty rough sailing. Troyes is not for two, or I suspect three for that matter. The game features rolling dice and allocating them to different areas of the board that allow for scoring points. There are some relatively mind bending rules about gathering dice from other players, forming sets, placing “worker” meeples and cubes on cards, fighting off the bad things happening in each round, etc. Troyes felt like a mish mash of too many mechanics in my opinion leaving me unsatisfied given the effort put into forging through the rules. The artwork, however, is top notch. Kudos on that front. 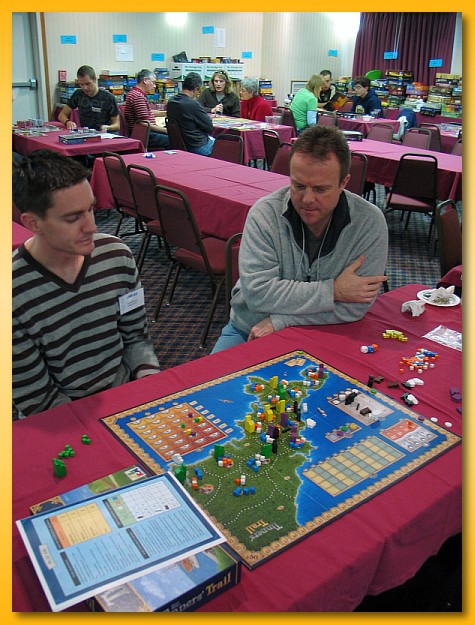 Feeling the need to get in another Wallace game and since Jared had arrived, we sat down to a game of Tinners’ Trail. My copy is the original Wallace version but I must say I like some aspects of the art for the second edition. I like Tinners’. It’s a simple game of cube collection and investment. It’s got the standard Wallace turn structure including a nifty “time” component to taking some more powerful actions that mix up the turn order. At times, players can sit out for a turn or two while others catch up. Timing when to pass can be crucial to start early in the next round or to hang back in hopes of picking up a new mine cheaply. I consider Tinners’ one of my favorite games. 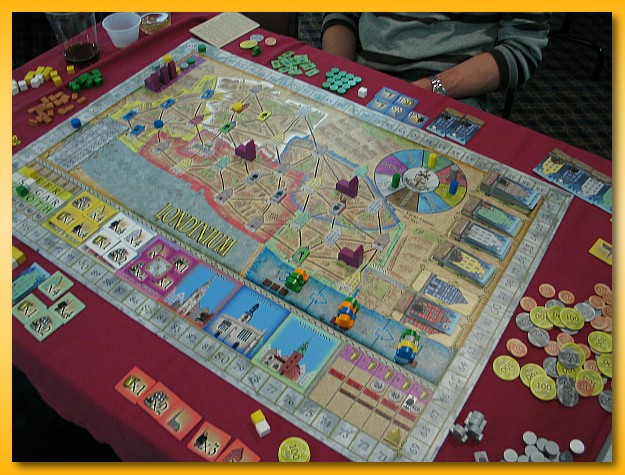 Jared is a Hamburgum lover so we pulled out the big board and played on the Londinium side. The game has no random aspects and all information is known. With the added rondel, the game is relatively heady experience. In this particular game, players were singularly focused on individual regions slamming down 3 and 4 donations at a time which was a rather stark deviation from my previous games. A bit on the longish side for my tastes but still good enough for me to not want to trade away my copy.

We broke up a bit and played a game of Dominion Prosperity, The Bottle Imp card game, followed by The Speicherstadt 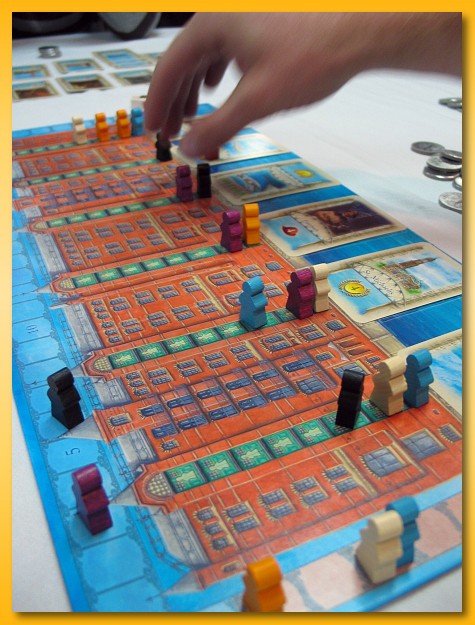 Speicherstadt is a devious game of out meta-gaming your fellow players as you vie for cards that come up each round. Players place meeples along tracks and players must pay the amount indicated by the sum of the placed meeples for that card or pass. The next meeple gets a change to buy the card for one less coin. This very simple mechanic coupled with a very tight money system makes for some touch decisions. Any game that can be taught to five people and played in less than hour is a winner in my book. I’m looking forward to a new copy in the mail very soon. 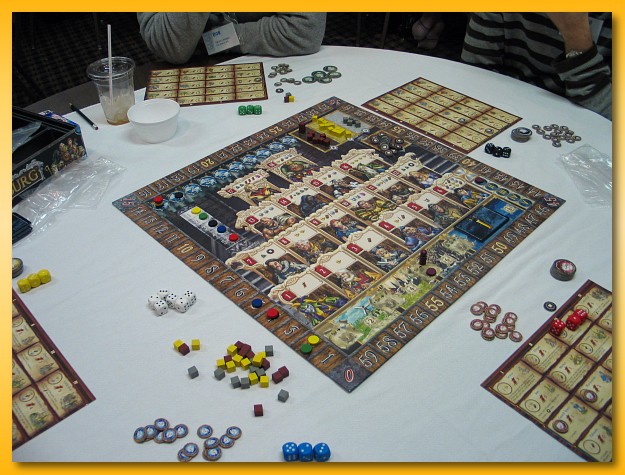 As silly as it sounds, I’ve never played Kingsburg but we sat down with five and played with the expansion “coins” that make the “monster fight” at the end of each round more strategic. I had a great time and really wish I had the coin to buy both the base game and the expansion. Maybe my secret Santa will come though for me this year! 🙂 The game features a nice dice rolling and allocation mechanic but with some aggravating player interaction. Placed dice grant you resources and other items whereby you can then build buildings. Players choose different paths to victory depending on which buildings the build but you’ve got to watch out not to ignore the monster that comes out every round in an attempt to knock down your hard earned efforts. Cool game with the expansion chips. 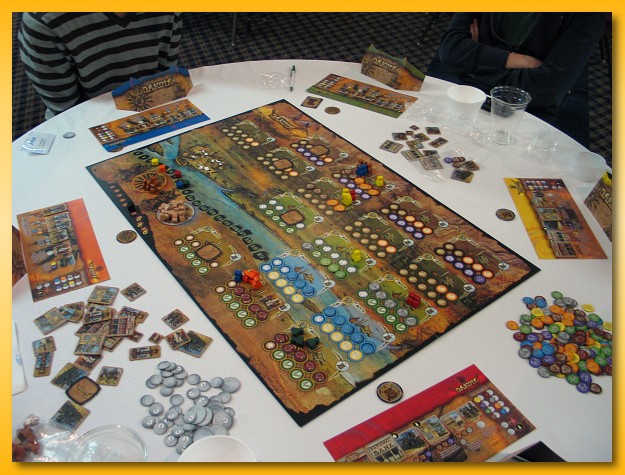 In a moment of insanity, we decided to close the night by starting a game of Dakota at 11:30 with five players and nobody knew the rules. As the last ones out of the gaming room, we locked up at 3:15 am and crawled back to our rooms for some much needed sleep. I didn’t find that much of interest in Dakota. I was hoping for more but it may be that my brain was starting to shut down. I did enjoy the division of players into the two camps (native americans and settlers) and the ebb and flow of cooperation and back biting that occurred. The game can get a bit nasty with players explicitly placing bits to take advantage of other players weaknesses so you’ve got to be ready to get picked on. if you’re not into that, then Dakota definitely is not for you. 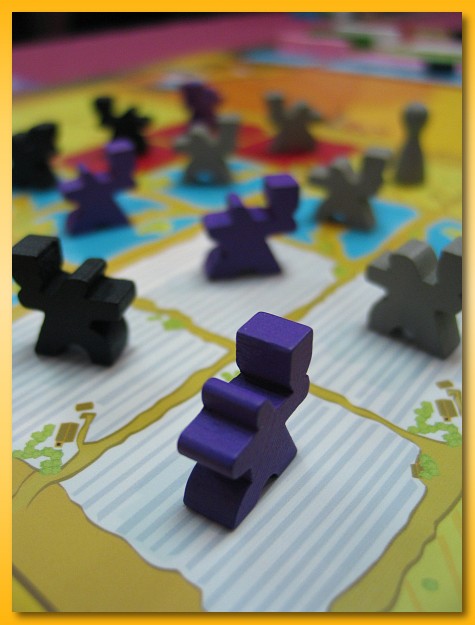 We started Saturday morning with Toscana a light, and relatively uninspiring game of wine production. Featuring some interesting artwork reminiscent of the the “Mad Men Yourself” website, players vie for producing crates of wine that will be the most valuable by game end. Players place the cool wino-meeples on a grid of vineyards that produce a kind of wine when watered. There is a bit of an market manipulation aspect of the game but in general its a relatively mechanical process. I can understand why the game comes with other vineyard “maps” given the static nature of the base game. 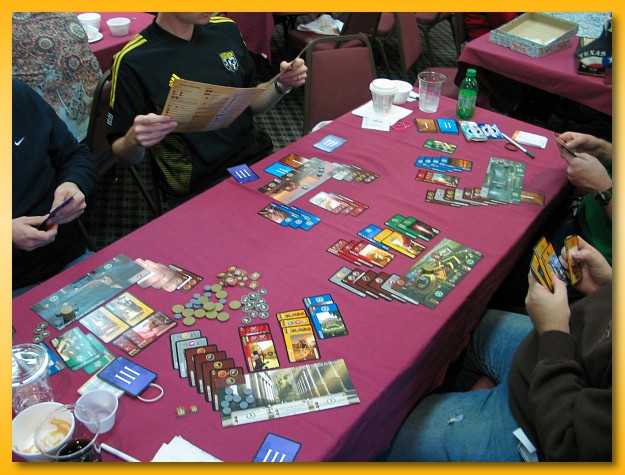 The highlight of GLG was, in my opinion, 7 Wonders. I couldn’t help but jump on the preorder bandwagon as soon as I got home. We had five new players and we read through the rules and played in under an hour. Awesome! With hardly any down time, players get dealt a hand of cards and after picking one, they pass the whole hand to another player (left or right depending on the round). Everybody simultaneously exposes the card they chose and lays it down. Some cards represent resources that you’re allowed to produce, others represent items that you collect for victory points, some represent military strength, others provide special abilities. Many cards require prerequisites of goods or other buildings but if you have the cash you can buy the necessary items, if available, from your right and left neighbors. Very neat and fast paced game. I’m really looking forward to my next play. 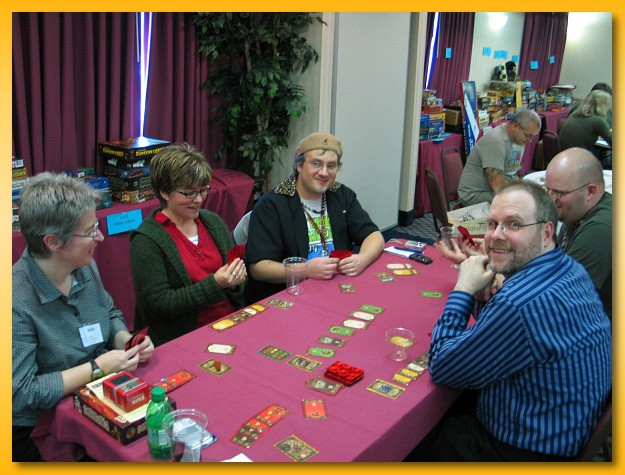 Next up was Maus au Chocolat and nifty little set collection game with some special powers thrown in. I’d really like to be able to find a copy but I might have to order it from France. But, although the game was cool, I got to play it with some very special BGG members: Diane Close (pdclose), Jess Ayers (Jatoha), Dave Van Sweden (vandemonium), Jamie Wilson (cold_fuzion), and Paul Close (too_close). I had a great time meeting them and getting the chance to play a game. 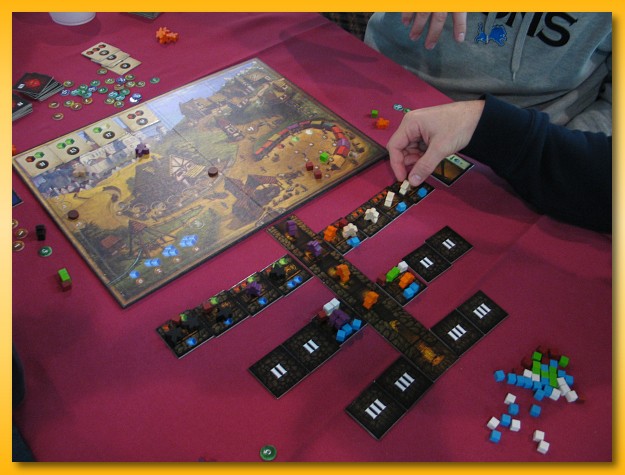 Next up was a learning game of Magnum Sal. The game features a relatively simple worker placement mechanic amid a Caylus-light salt mining theme. Players buy and place meeples into the mine and vie to fend off the water to mine the different types of salt used to fulfill the royal salt orders. Fulfilled orders earn victory points. Our first game had some rough spots figuring out how to use the path to the royal orders and how to make the best use of the “tools” cards but all in all, I can see the game in there. I’m not ready to buy a copy but I’d be interested in playing again. The artwork is very nice.

After quick games of Haggis and Drive we participated in the great GLG prize table giveaway where I scored copies of Inca Empire and Dragonheart. 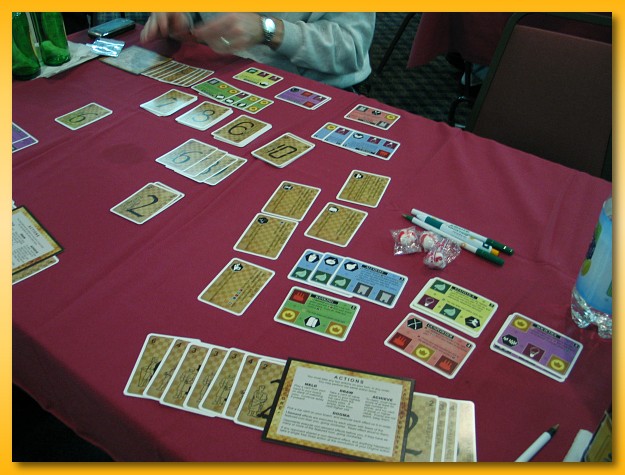 My brain started to go but my wife and I teamed up to play the third player in a game of Innovation. Innovation is a chaotic romp of card collection and screwage. It’s not a game for me and it’s a lot longer than I expected. I’d be happy to never play it again. The game is loved by many, and that’s fine, but it’s just not my cup of tea.

I tried to persevere through the rules to Isla Dorada but my brain just could not process the information and we aborted the attempt. Since most of us were mentally wiped and midnight was behind us, we wrapped up the final night with 5 rounds of The Bottle Imp and a full game of Wyatt Earp.

I greatly enjoy my time at GLG and always look forward to sampling the new Essen games and putting in several days dedicated to gaming. Here’s to next year! I apologize for the typos, bad grammar, and worse than normal writing skills (is that even possible for me?!) as I’m still mentally fried from the experience. Bring on the games!.