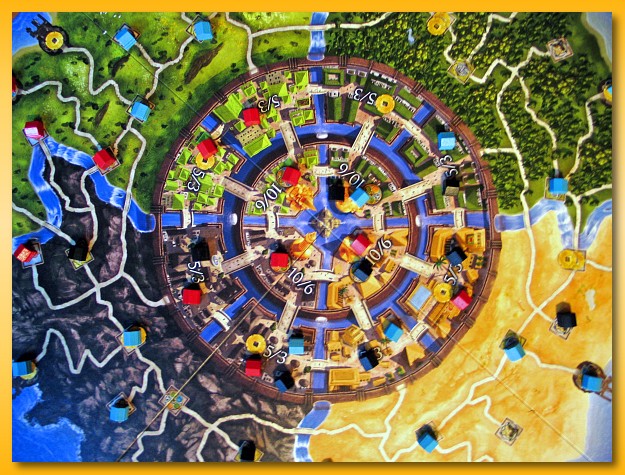 Three to four players attempt to build connected networks of wooden buildings across the four terrain types that lead to the Golden City at the center. Outside the outer city walls, each terrain type (desert, mountain, grassland, forest) comprises ports and a network of pathways connecting villages that eventually lead to the city walls that form a circle of 12 segments (3 of each terrain type). The rural areas are separated from one another by rivers that also leads to the city’s center. Inside the walls and within each pie shaped quadrant of the city there exist three segments of the city: two outer segments and one inner segment. City segments are connected by bridges.

Players begin their journey to the Golden City at the ports, building businesses (placing wooden bits) in the connected villages along the pathways outside the city. Eventually, players enter the walls of the city and hopefully make their way into the center of the city. Along the way, players earn “letters” (victory points) and the player who earns the most by game end is declared the winner.

Play is relatively straightforward. Each round, a deck of “landscape” cards, depicting terrain types and ports are drawn and placed face-up (equalling twice the number of players in two columns). Players place “hands” on pairs of cards indicating a desire to take those two cards. Subsequent players may either place their hand on an unclaimed pair of cards or kick someone off at a cost that increases every time it’s done within the round. In essence, players bid on pairs of cards and eventually all of the pairs are claimed, the bids paid, and the cards allocated to the players hands.

In turn order (always clockwise), players build zero, one, or two businesses (place wooden bits) onto the board. To place a bit on a port, the player must play a single port card. To place a bit in a rural area or in one of the two outer segments of a city, the player must play two matching landscape cards that depict the appropriate terrain type of where the building is being built. Two matching terrain cards can be played as a single wild card for any desired terrain type. When building a building, the only restriction is that you must be able to traverse the pathways to a neighboring village or city segment where you’ve already built a building. Ports and rural villages can only contain one building. City segments can contain multiple buildings but only one of each color.

All building locations come with a bonus for the builder that takes the form of an extra landscape card, money, bonus cards, keys, or goods. Players build their network of buildings towards the city center but sometimes branch out to gain the favors represented by the individual building locations. The key favors are especially critical in that when one gains a key, it allows them to unlock one of the cities central segments for placement of a building. The key is good for one use and given that the game only contains 6 keys, they’re a highly contested item for players trying to gain the big rewards of building in the city center.

After all players build (or opt not to), a scoring round occurs. An individual scoring card (flipped up each round) determines two fixed scoring goals for the round granting “letters” (victory points) to those players who have managed to obtain a matching goods card, have built along a river that separates the rural segments, or have built in the specified city segment.

An additional bonus deck of cards allows players (when building in the appropriate villages) to obtain end-game scoring letter bonuses for building in specific locations or acquiring specific items of interest (e.g. goods).

In my opinion, The Golden City is a simplified form of an earlier Schacht title China which was itself a simplified form of an even earlier Schacht title Web of Power. The Golden city throws in the auction mechanic and the simplified but more varied scoring opportunities for the delicious tension provided by the end game scoring in China. The ability to block access to keys seems relatively easy and unbalanced. Although the 10 letter swing in points gained by being the first in the city’s inner segment may not make or break the game it is a significant swing in points.

Landscape card play is identical to China but there is no penalty for “opening” a new region. In fact, The Golden City makes it even easier to start a new network of buildings by requiring only a single port card to establish a “disconnected” presence in a terrain type.

The flipping of the “score” cards each round do provide short-term goals but in many situations it’s very difficult to do anything about them given that it can take several turns to build up to some goal. It might make more sense to introduce a house rule similar to Kreta or Dos Rios where multiple cards are visible each round and you can plan on building presence towards an eventual scoring N rounds from now.

There is an official two-player variant provided by Michael Schacht that I have yet to try but it seems that game would work best with four. With three there doesn’t seem to be enough competition for rural land spots as well as less competition for the auctioned cards. Looking forward to more plays to see if my hunches proves correct or not.

I like The Golden City and, as I said, I’m looking forward to more plays. It definitely is a fairly simple gateway-style family game that’s easily picked up by even those that don’t play games that often. Given this position in my collection, I’m targeting it for a group of couples that gather at our house once a month and for a opener/filler for my more meatier gaming group. Unfortunately it only goes to four players so it might not see the table as often as I’d like.