A few weeks ago I was contacted by Sebastian Sohn (BGG’s chaosbreaker and an assistant teacher for a game design class at the Arts Institute of Los Angeles) concerning my Ingenious implementation here on Marquand.net. Sebastian maintains one of the coolest geeklists on BGG albeit with one of the most unwieldy titles Sebastian Sohn’s SoftBoard Games: Free, Commercial, and Abandoned Computer Version of Board, Card and Role-Playing Games with Computer AI (Artificial Intelligence) Opponents with Screen Shots. In his email, he was curious about how I’d managed to keep my implementation of Ingenious up and running when so many other sites have been forced to remove them. After exchanging several emails, he decided to “interview” me for The Game Cookery, a web site dedicated to games and game design.

I was surprised and a bit flattered to be interviewed because I’m not a person of significance in the world of board games. I’m just a guy who carries on normal life activities in the middle of Ohio, has a rather questionable number of board games stacked in his house, wrote some code on the side, and wishes he had more time to play games. I don’t really know what horn I’m tooting here but it feels like I’m tooting something. Maybe I’m just plain tooting. In any case, you can find the article here if you so desire to read more.

Thanks Sebastian. Hope I didn’t screw up.

It’s about time for another summary of Matt’s unplayed list. In looking back at my list from January 2009, I’ve managed to whittle the eleven unplayed games down to just eighteen! At this rate I’ll be done by, well, never! Only two of the original eleven made this list, four were traded, and five got played. In rereading the original list I got a chuckle out of my comment about Dominion:

This card game for 2-4 players only lasts 30 minutes but there are 500 cards and the game features a “deck building” aspect much like a collectible card game. There’s something daunting about that for me. Maybe it’s feeling like I’d have to play it so many times to feel like I know what I’m doing.

Sheesh, Dominion is almost a filler game now. Great yes but not a thinky game by any means. You can play it almost on autopilot. If you don’t have a copy, pick it up and play it a few times and then inflict it on your extended family during the holidays or weekend get-togethers.

Okay, embarrassing as it is, let’s get on with the list: 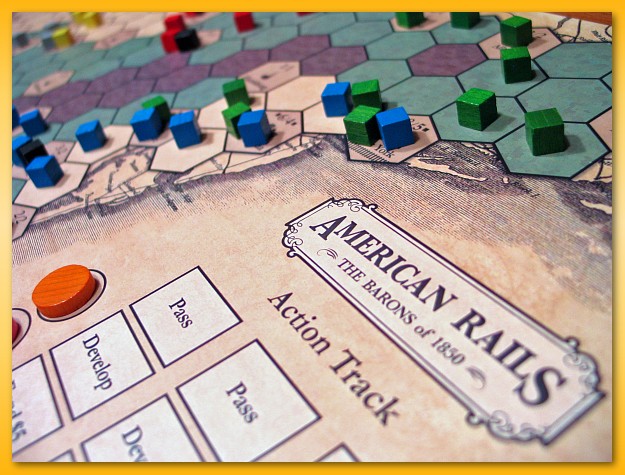 Broke out American Rails and started going through the rules. You can certainly see the Chicago Express influence on the design. The game features six train companies each with different numbers of stock certificates and track (cubes) available and players vie for investing in the companies that earn them the most money by game end.

Through a series of stock auctions and several “years” players extend the lines of the companies by placing track (cubes) across the eastern United States. Money used to win the auctioned shares goes into the company coffers and is used to build track. The cost of track is determined by how many cubes are in a hex and what type of terrain the hex represents (plain, forest, and mountain). Some hexes can be “developed” increasing their value to the company when dividends are paid to shareholders at the end of each round. Each city you connect to increases your dividend. If you hold the city individually you get more than sharing the city with another company.

The turn structure within a round reminded me vaguely of Tinners’ Trail. There is no time component of your move affecting turn order but the the action phases within a round feature three columns of actions. As you take an action you place your disc on the action followed by everyone else. Turn order for the next action phase follows top down from the column. Choose a more powerful action this phase and you’ll go later in the turn order in the next phase.

I haven’t played a full game solo nor played “for real” but it seems money is very tight and you’ve got to be smart at knowing how much to bid and how best to use the money that the company amasses by auctioning shares. It appears that making a mistake can be costly.

I suspect I’m no good at the game since I play more by my gut than “by the math” but it does feel intriguing. Looking forward to learning more. 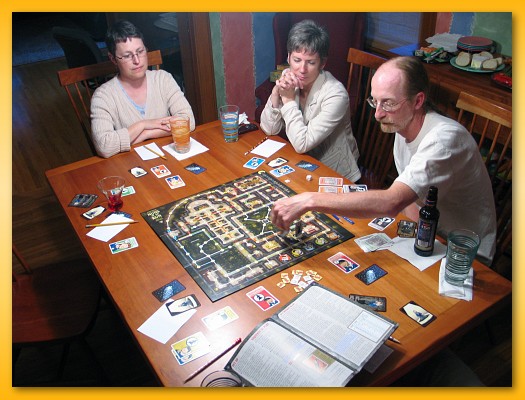 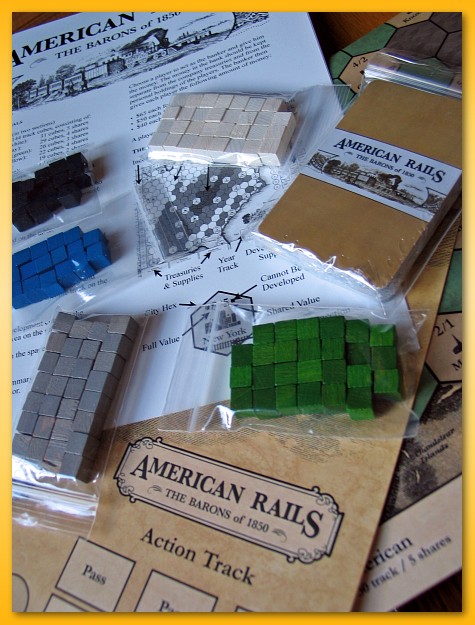 I’ve posted an entry in the “Games for Geekgold” lottery for my copy of Wasabi. The lottery will close at May 31st and I will pick a winner using the Original Awesome Tool – BGG Geekgold Lottery Picker created by jeromier.Each 1 geek gold tip given to the geek list entry for Wasabi gives you one chance to win. As a bonus, every 5 geek gold grants you a free 6th entry. Shipping is on the winner unless the list reaches 200 geek gold. At that point, I’ll cover the first $12 in shipping. International entrants are welcome. Good luck.