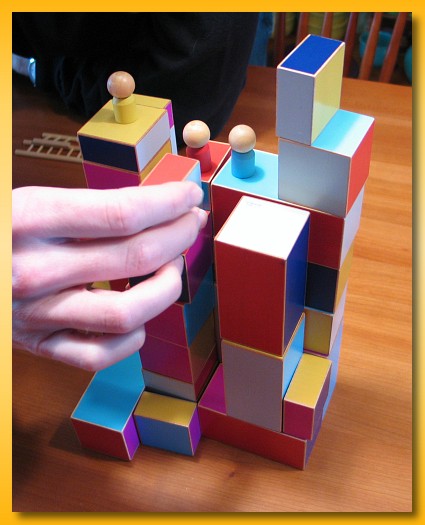 I got a couple of close gamer friends together for an impromptu game day at my house. We warmed up with Die Aufsteiger/The Climbers. 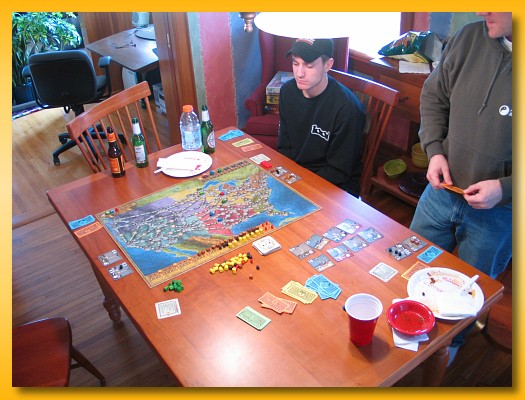 We quickly moved on to Power Grid. Power Grid is an economic, route building game of supplying power through a network of cities on a map. Players bid money for auctioned power plants that require different types and numbers of resources to operate (coal, oil. trash, nuclear, wind). After acquiring power plants, players must purchase the necessary resources to operate them from the market. As resources are purchased, they become scarcer and therefore more expensive. Additionally players build upon a network of cities that their power plants supply. The only way to obtain more money, is to power the cities in your network at the end of each turn. When the game ends, the player that can power the most cities on the final turn is the winner.

I’m not a big Power Grid fan though. I owned a copy and we’d tried to play it numerous times but could never make it through the entire game in one sitting. The first step of the game (up to 7 cities) is relatively straightforward, but the second and third steps get a bit fiddly with the power plan auction market. There isn’t quite enough meat in the first step to make it a “real” game but I don’t enjoy the last two steps so I’m in a quandary. I enjoyed playing it more with only three players rather than the full complement of players. It moved along at a faster pace but I’m still glad I traded my copy away. 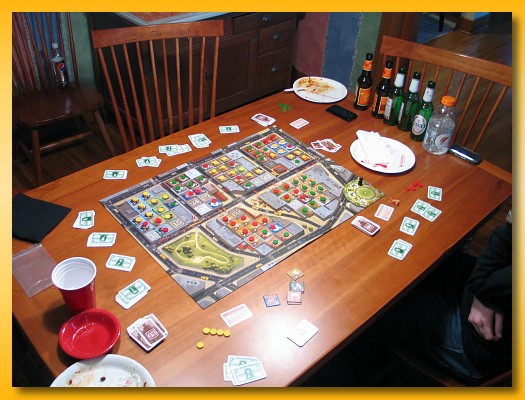 Next up was Chinatown. The game was new to all of us so it was a learning game. I’m not fond of negotiating games and to do well you have to be able to see what’s worth negotiating for and how best to value that position on the board. I ended up winning but I don’t think that had much to do with my skill at the game.

Players draw cards and from that set keep a few and discard a few. The cards depict numbers that indicate where on the grid (Chinatown) you can place a “control” stone. Players place their stones on the numbered squares for the cards they keep and then everyone draws tiles blindly from a bag. You job is to try to collect and or negotiate for trades and/or controlled positions on the board such that you can lay identical tiles in groups. The tiles represent types of businesses being built in Chinatown (e.g. Laundry, Restaurant, Fish Market, Tea House, …) The larger your establishment gets, the more points it’s worth at the end of the round.

I enjoyed playing the game well enough but not enough to seek out a copy for my collection. 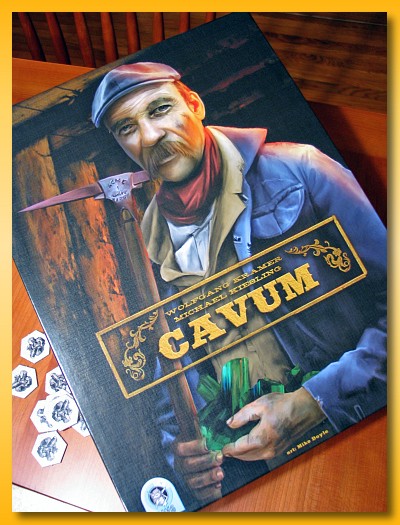 I can’t believe it but I forgot to take a picture of our game of Cavum so all you get is a bogus box shot I took a few days ago. Cavum is a brand new (thanks BGG Secret Santa!) title from my collection and I’d only played through a sample solo game. In Cavum, players did tunnels into a central mountain looking to “uncover” loads of gems. Players place tunnel tiles deeper and deeper into the mine and build stations that block travel through the tunnels for other players. The goal is to collect the right kinds of gems during a traversal of tunnels between two stations. Tactical placement of stations, blocking players, destroying tunnels, and connecting to the cities that surround the mountain are critical.

The game can be rather cut throat since players can place dynamite tiles that blow up tunnels and they can place tiles on top of existing tile to reroute the tunnels for offensive and defensive purposes. I liked the game but there are a lot of moving parts and things to think about. 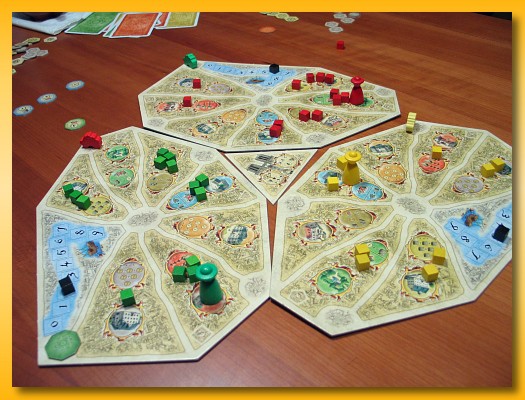 Our final game was Notre Dame. October 2007 was the last (and only!) time I’d played. It’s been to the table a few times in game nights where we’ve split into two tables but I’ve always been at another table. I was happy to play it and really enjoyed it. I really need to get this game to the table more. Notre Dame is somewhat of a solitary endeavor. Each player is assigned a lobe of the city with Notre Dame in the middle. With one exception, your play is limited to placing cubes into boroughs of your section of the city. You place cubes and a pawn (your trusted friend) into individual boroughs pay playing cards from your hand. Each borough affords you different actions to perform and the more items you have in the borough the more powerful that action gets.

Players interact in a few ways passing cards to each other, vying for dominance in Notre Dame, and moving a carriage around the city. You’re all trying to earn victory points but you’ve got to deal with the plague-ridden rats that attack at the end of every turn. I really enjoy Notre Dame and it’s a shame it’s been so long since I’ve played.

Thanks for coming over for the impromptu session and I hope to do it again soon.