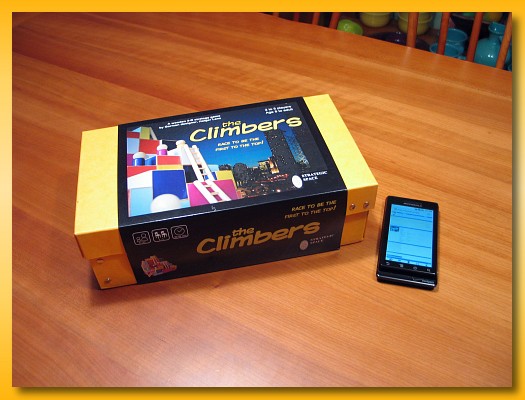 Okay, it was an impulse buy but my copy of Die Aufsteiger, a.k.a. The Climbers, arrived today. I was surprised that it came so quickly given that I’d only ordered it on Friday morning but by Monday afternoon it was sitting on my porch, packed well in a USPS Priority Mail box. 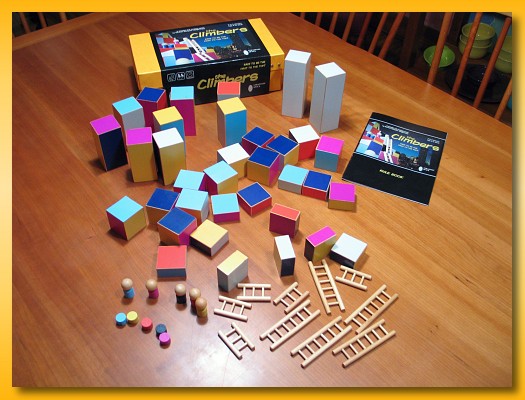 The game is heavy, weighing in at 4 pounds 6 ounces; you don’t want to drop that on your foot! The shoe-boxed sized box, shown next to my phone for scale contains chunky wooden blocks, five wooden “climbers”, five blocking “stones”, and ten ladders (in two sizes). 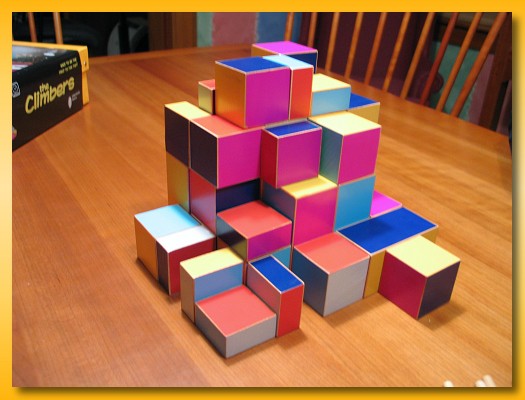 You begin the game by placing two large gray blocks vertically and then everyone simultaneously places blocks around them following a few simple rules. When all the blocks have been placed, the two gray starter blocks must be completely hidden. The image above was the arrangement Noah and I arrived at for our first game. 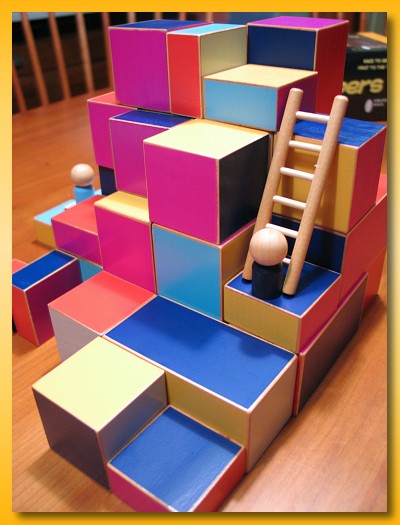 Players take turns optionally moving a block and then attempting to climb their “climber” up the block mountain following a few relatively simple rules concerning what colors you can climb on, how many climbers can stand on each block, and limitations on how high of a block you can climb upon without using a ladder. Ladders are only good for one use and are removed from the game. Each player gets a single small and a single large ladder so use them wisely. 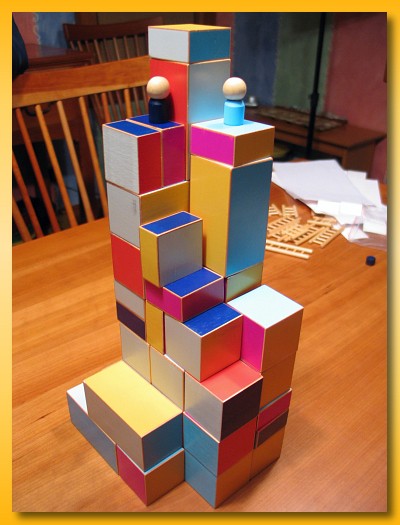 The game ends when during a turn nobody moves to a higher level. The player at the highest level wins or in the case of a tie, the first player to reach the tied level wins. There are optional minor modifications to the end game rules when playing with two.

Since the set up is random but still carried out by humans, you might think there would be cause for making sure nobody is stacking the deck, pardon the play on words, by placing blocks in a fashion to make it easier for their color. However, that’s taken care of by the fact that you don’t know what color of player you’re going to be until after the initial set up.

Noah and I had fun. It’s a light but interesting mental puzzle, good for an opener or closer or with light gaming company. I’m interested to play it with more to see how that plays out. It’s a very photogenic game and I hope to try to get some artsy-fartsy shots in the coming weeks.