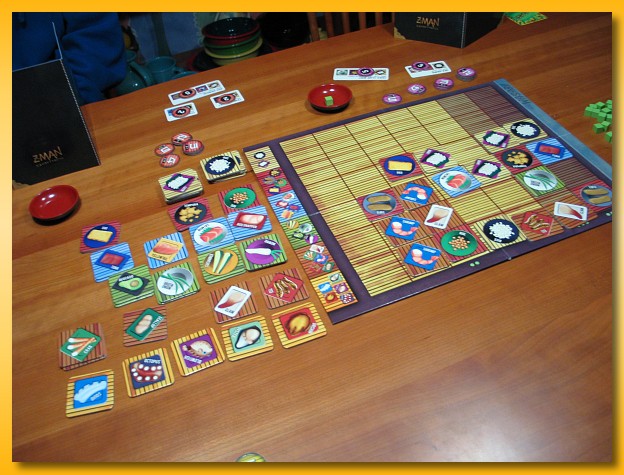 Few games trigger extremely visceral negative reactions in me but after only a few games of Wasabi, I’m content with never playing it again. I give the game high marks for component quality. The tiles are thick. The bowls and wasabi cubes are an excellent thematic addition. The choice of little menus to hold the recipes, clever. However, my frustration during each game multiplied faster than noodles made by a world renowned master dough stretcher.

Wasabi’s theme pits players against one another in attempts to complete sushi recipes of various complexities (number of ingredients). Players gather ingredient tiles and place them on the board in rows and columns trying to create lines of ingredients that match hidden recipes. Each player has a “menu” that is used to both conceal three recipes (taken blindly from a common pool) and three ingredient tiles taken openly from the “pantry”. A turn is composed of placing an ingredient tile (optionally playing a card) and refilling your hand of ingredients back up to three. If you’ve completed a recipe you remove the recipe from your menu and assign an appropriately sized token (according to the number of ingredients in the recipe: 2-5) to it earning victory points. All players start the game with the same mix of victory tokens and you’re only allowed to complete recipes of a given length if you have a token of appropriate size left. The game ends when no more tiles can be placed on the board.

If the line of ingredient tiles is in the exact order as that shown on your recipe card, you not only get the victory points for the recipe but you also receive an appropriate number of green wasabi cubes placed in your bowl for completing the recipe “in style”. The larger the recipe, the more difficult it is to complete it “in style” and therefore the more wasabi you cubes you win. Each wasabi cube counts as one victory point. There is a strict order to refilling your hand after completing a recipe. The AIR rubric reminds players of that order.

I – Ingredients. You must take as many ingredient tiles necessary to get back to three. The ingredients are placed face up next to the board in the “pantry” and you’re free to consult your remaining recipes to make an informed decision.

R – Recipes. You must take as many recipes as necessary to get back to three. The recipes are taken from a face down common pile separated by length. You have no idea what ingredients will be required to fulfill the recipe you choose but you can freely choose the complexity level.

So what are the action cards used for? A normal turn calls for the player to lay a tile and then AIR and the action cards allow you to break the rules. Most cards are played back into the common pool and becomes available for another player to take when they complete a recipe (you’re not allowed to pick up the same card you played when performing your AIR at the end of your turn.) Spicy lets you place an additional ingredient tile. Switch lets you swap the contents of two orthogonally adjacent cells on the board (one cell can be empty.) Stack lets you place an ingredient tile on top of an existing tile and therefore occluding the tile underneath. Chop lets you remove a tile from the board (and potentially exposing an occluded tile.) The Wasabi card is placed on the board itself and occludes up to four cells. This effectively blocks further placement of tiles in these four cells, prevents any player from fulfilling recipes that use the tiles underneath the card, and hastens the game end since it can be placed over empty cells. As a bonus, the player of the card gets a green wasabi cube. Note also, that the next player to complete a recipe is free to choose the Wasabi card placed on the board thereby removing the “block”.

At this point you might be thinking to yourself, the game doesn’t sound too bad… a light set collection tile laying game. I thought the same thing. You might also think it unfortunate that you have to blindly take recipes but the designers were purposeful in this regard to keep the game moving. Analysis paralysis takes over with so much information available and the game slows to a crawl (observed in playtesting). Artistically it looks fantastic and the mechanics seem pretty straight forward. But…

Those damn cards. It’s all about the damn cards. Every time I’ve played I’ve worked and worked on multiple recipes but it never failed to amaze me the knack that other players have for inadvertently messing up my plans by chopping out tiles I needed, or switching two cells, or stacking on top of a tile I was relying on, etc. I don’t mind games where players actively attack other player position but having to repeatedly take my lumps as just a mere side effect of players all trying to mitigate the chaos of the ever tightening board is just too much to bear. On more than one occasion I was poised on the following turn to complete one or two recipes only to have it thwarted by card play. If you don’t have cards, you need to complete recipes to get them…but in the latter half of the game you’ll be hard pressed to complete anything without using a card. It’s a catch-22. If you’ve gotten thrashed by card play and you need to trash your recipes (you can always forego your turn and throw recipes out and pick up more) you’ll be at the mercy of the blind draw and you may very well find yourself in just as bad a shape as you were at the beginning of your turn and nothing to show for it. 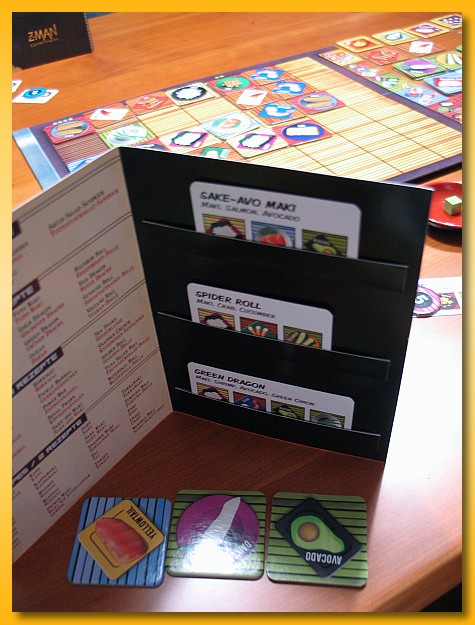 I love the look of the game, the artwork is fantastic and the quality of the components places it solidly in the top tier of games but the chaos killed it for me. I don’t find it fun to take my lumps or give out lumps inadvertently and I find myself incapable of playing it in a light/filler game mode where the game is more of an activity than a real game. You have to think very tactically to play even remotely well but it’s just not worth it for me. Up for trade.