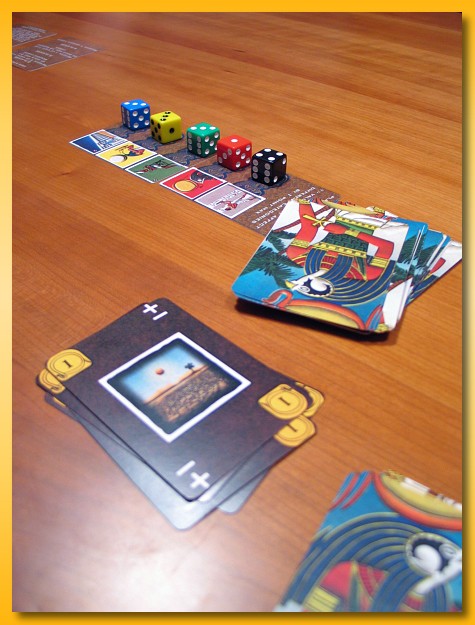 Rarely do we plan ahead of time what we’re going to play on any given game night but this night was different. Jared had checked out a copy of Battlestar Galactica from the CABS library and we knew a week in advance what was coming. I never followed the BG television program and have seen no episodes of BG – The Next Generation ™ but I’d heard that it was not necessary to play the game. However, I did watch a short boardgameswithscott video on playing the game and felt I was up to the task.

For my group, BG is a long game. Epic long. We just don’t play games like it but we wanted to play it at least once. We routinely overshoot the listed times on the boxes by 50%-75% and BG lists at 3 hours. Yeah…epic long. So, add in a lengthy rule reading and we were in for a long night. A “school” night mind you. 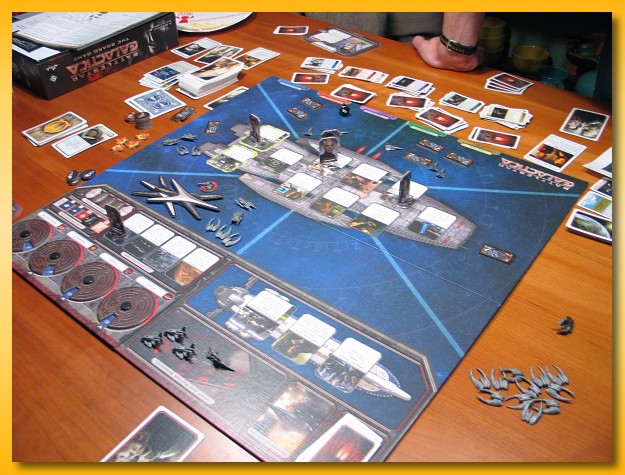 As luck would have it, the weather turned bad and the snow and ice-bound traffic snarled up most everyone by 15-20 minutes. I’d wanted to get in one playing of my rethemed DYI copy of Scripts and Scribes and although we had 5 I taught the game to the other four and sat out while they played.

So, by 8pm we were ready to start in on BG. When the initial round of loyalty cards got passed out, I found it difficult to contain my elation at receiving a Cylon card but I did my best to act human (I don’t think Cylons make giddy noises like a little girl.) We made our way through numerous failed skill checks and I only poisoned the deck with one card a couple of times. On my turn I attempted to help soliciting input from everybody, grumbled when my attempts at helping would fail, acted suspiciously towards others as if they were Cylons, and in general not trying too hard to sabotage anything.

We came out of the first jump relatively unscathed but the Admiral selected only a distance 1 planet and that looked a bit suspicious to me. I started to think that maybe I’d found an ally but then realized that a recent failed skill check appeared to be ruined by some card play that wasn’t mine and the Admiral didn’t contribute. Bob, on my left and President had narrowed down the reason for the failed skill check to be between me and another player. I also began to suspect the other player so I poured on human schtick and overtly tried to help. The other suspicious player cranked up his attempts at sabotaging the skill checks and the gig was up. He outed himself and the focus of all the other humans were aimed solely on the known Cylon. They expected only one…

I sat back and bided my time. I was the engineer and I wanted badly to use my one time game power of choosing one color during a skill check to ruin its value but the opportunity wasn’t presenting itself. The known Cyclon placed the Admiral in the brig and on the Admiral’s turn he, with a skill card, granted me (on his left and with complete confidence in me as a human) the ability to take a turn. This was the perfect time for me to out myself as a Cyclon since I’d get two back to back turns with Cylon capabilities. To make matters worse, the player to the Admiral’s right was the other Cylon so we’d effectively have three Cylon turns in a row.

But, I was blinded by my desire to sully a skill check with my engineer’s power and I again didn’t grab the brass ring and took a turn that ended innocuously. I was about to take my regular turn and out myself when the question came up about terminating the game. The humans had only 1 distance point under their belts, the outed Cylon had done a good job of pulling down the population value, there were lots of ships ready to do some damage, they weren’t close to jumping, and we were roughly 3 hours into the game. So we decided to fold up shop. Jared picked up the loyalty deck was about to pass out the rest of the cards to see who “would have been” the other Cylon and I announced that it wasn’t necessary since I was the other Cylon from the beginning! A huge groan arose from my living room…a complete surprise. Man, I wish I would have outed myself when the Admiral let me take that turn.

BG is a fun enough game but the fun was really being generated from the camaraderie among my gaming friends. Sure, the game established the scaffolding for it to take place but in retrospect, the mechanics of the game are not all that interesting. Since I’m not a fan of the show I miss out on the subtle (and even overt) ties back to the theme and the game itself boiled down to card play and plastic ships.

I’m glad I got a chance to play. I had fun but I don’t see a need to play another game to the finish to feel complete. I’m happy with what I got out of it and I feel comfortable moving on. We lost a player to the ice and snow and finished up the night with a round of Scripts and Scribes for four.

Thanks guys for coming over. I had a lot of fun being a toaster.