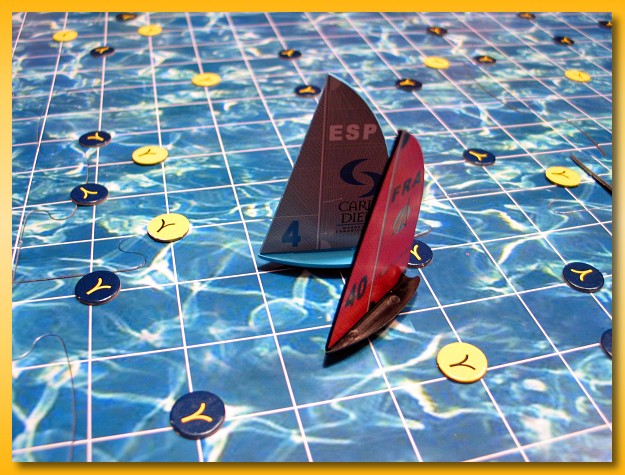 Lisa bought me a copy of Race the Wind back in May of 2007. We’d played it once as a two player after slogging through the utterly horrific rules and could feel the game in there but we had so many questions.

Lisa really liked it and we’ve never had a chance to play it with more than two players (which I still really want to do). I’ve had it up for trade for quite a while but my trade interest is low. I’m convinced it can be a good game.

So, last night we decided to pull it out for another go. As I mentioned previously, the first hurdle is the incomprehensible rules filled with typos and the inconsistent use of the same word to mean multiple things. For example, boats can do two things: move and maneuver (turn without changing their position on the grid). On your turn you take actions. However, sometimes the rules describe actions as moves and/or turns. So when the rules state “after your move” are they referring to movement or action? As if that isn’t enough, they sometimes use phrases like, “the boat proceeds” to indicate movement on the grid and at other times leave other situations completely out of the rules. I suspect the rules were either translated poorly or written by someone who sails and at the expense of being pedantic, left out the “obvious” and “common sense” things sailors do ensuring only partial comprehension.

The second hurdle is the nautical jargon. Bowline, tacks, gybes, broad reach, beam reach, starboard, port, stern, bow, capture, shadow, priority, etc. are not in my normal vocabulary but you’d better get used to them because you’ll need to understand how the wind direction (which changes 12 times in a two-player match race) affects your abilities and how to select what you can do on your turn.

The game attempts to capture true regatta rules in a board game and from what I understand from people who know something about racing, it does a very good job. I’ll describe the setup for a two-player match race since that’s the only type of game I’ve played but not much is different for more players beyond the starting conditions and the level of interaction during the race.

The huge board is assembled and a buoy is place on the same horizontal grid line with the commission boat separated by some randomly chosen number of grid lines, somewhere near the bottom of the board. These two items form the downwind starting gate. At some point near the top of the board, another buoy is placed representing the upwind buoy. Boats make three trips up to the upwind buoy proceeding clockwise around it and three trips down through the starting gate (between the buoy and commission boat and turning clockwise around the buoy and anti-clockwise around the commission boat, basically to the outside of the board, depending on which object you wish to turn around as you make your way back north). Two wind flags are positioned along the long side of the board (between the buoys) and represent two horizontal grids lines that, when crossed by the lead boat, triggers a roll of the die which sets the wind direction (most likely changing it) until it’s crossed again.

The start of the race requires boats to maneuver and move through a series of seven turns before being allowed to cross the starting line. Boats are allowed to start above the starting line but they must first cross it heading south, maneuver, and then come back north. There are additional rules concerning when you’re allowed to touch the starting line, how long you can sit (maneuvering) on a single node of the grid, etc. Eventually, the race starts and every boat is heading north against a wind from the north.

The regatta field is littered with yellow and blue tokens which affect the rate at which the boats travel between the buoys. Yellow tokens represent falls and cause the boat to terminate a turn early if reached mid-turn AND cause the boat to skip a turn in the following round. Blue tokens represent gusts which, when reached, trigger an optional additional movement on the grid.

Although smart navigation by avoiding yellow falls and taking advantage of blue gusts is important, the meat of the game is really the interactions that occur between boats. There is a priority order that occurs when two boats vie for the same position on the grid or a boat wants to move into an position occupied by another boat. A boat’s relationship to the wind (starboard or port) and its position relative to the other boat and the wind (windward or leeward) determines which boat has priority over the contested position. If a boat lays claim to a contested position and doesn’t possess priority, the other boat can call a penalty that the other boat must pay before the end of the race. Each penalty is paid by the boat performing a 360 degree maneuver through 4 successive turns (ouch!).

There are other rules affecting the priority ranks when boats are within two grid positions around the buoys when making turns, boats in the wind shadow of other boats, capture rules when “catching up” with a boat from the stern, etc. that are the real keys to controlling and taking advantage of the player interaction. The game is still fun with two but with more players I can see how outsmarting other players by making them pull up or maneuver when you have priority can make or break the game.

As it stood, Lisa won by one boat length after our three lap match race. The abrupt wind direction changes when passing the wind flags weren’t particularly devastating to either of us since we were always within a boat length or two from one another and in many cases, traveling the same wind-line and therefore affected equally. There is a game in there and I’d like the chance to play with more. However, it does sit on the shelf a lot and without regular play, it does take some effort to relearn the rather esoteric rules of engagement.