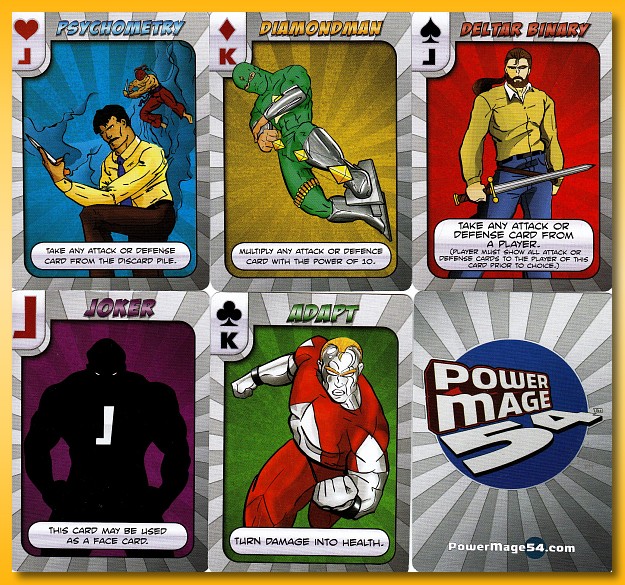 A few weeks ago I received a copy of a game for review: PowerMage54. This time of year is a tough time to get games played for enjoyment let alone for review purposes but I did manage to squeeze in some time here and there with various numbers of players and was pleasantly surprised.

PowerMage54 is not a gamer’s game but there is a game in there. With a few simple tips and a quick trip through of the rules you can be off and running in minutes. The physical game is composed of a standard deck of cards (plus the two jokers) hence the “54” with the run of the mill artwork replaced by a super-hero/power-mage theme. The game is packaged as a standard-size deck of cards in a sturdy flip-top box with the single sheet of rules folded and tucked in.

Short and to the point, your goal is to beat the crap out of each until there is only one PowerMage left standing. From the get go you can see that the game features player elimination which may or not be your cup of tea but, in the right circumstances, it can be quite fun.

Each player is dealt and hand of 5 staring cards and is given 100 points. Play rotates around the table and during your turn you draw a card and then take an action. The action is one of the following depending on the cards you possess: attack, repair, thump, or in some circumstances pass. The three action types correspond to the three suits spades, hearts, and diamonds. Clubs are used to defend against attacks.

With only the rules described above, the game would basically be a slightly modified version of the childhood game of “war”. So to spice it up, the face cards depicting the PowerMage artwork (see above for samples) have special abilities and can be used to augment action levels. PowerMages can be played individually by discarding the cards and taking the action described on the card. However, losing the PowerMage played singly can be a risky move since you lose the PowerMage to the discard pile. The real power comes by playing multi-card combos that include the PowerMage and when played in this manner, the PowerMage goes back into your hand to come out another day.

The thump cards (diamonds) are very similar to attack cards (spades) but to play them you must show a PowerMage card. The PowerMage returns to your hand but then you take the action described on the card which might allow you to steal cards from other players, force them to discard cards etc.. PowerMage/thump combos can also be played along with an attack card in a three card combo. When this is done, the PowerMage returns to your hand but the value of the thump card acts as a multiplier for the attack card. So a lowly 6 of spades can be jazzed up to a 60 point hit with a 10 of diamonds thump card.

When attacked, clubs are played to lower the intensity of the attack and thump cards can be played in three card combos to increase the defense in the same manner as the attack. Repair cards (health/hearts) can be play (singly or along with multiplier thumps) to add points back to your health value (remember you start with an initial 100 points). If you ever go to zero…you’re dead.

The game is a knock down drag out with 2. Giant thumps, repairs, and defenses can generate wild fluctuations in points. With only one opponent, it’s an all out battle to the death. With more players the game gets much more intense/thinky. You have to be careful blowing your hand on big attacks because dumping a load of hurt on another player can leave you wide open to a chain of attacks from power hungry PowerMages bent on making into the end game.

I was a bit surprised by the game and at $7 you can’t beat the value.

Take a trip out to the PowerMage website and learn more: http://www.powermage54.com/. If you’re looking for a highly portable game with a Chuck Norris kick to it, you can hardly go wrong for the price.