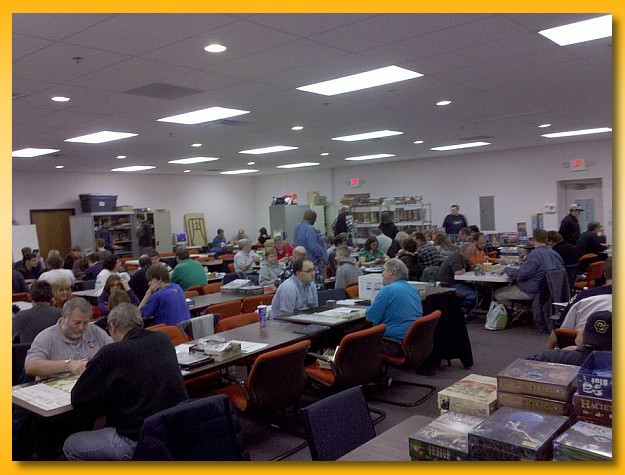 I convinced Lisa to go with me to the annual CABS After Turkey Day game day and after we got home Lisa said, “Well…I have to say that was fun”. The room was packed with about 100 fellow board gamers enjoying games and several gamers selling used and new games in a flea market. I noticed my friend Bob was reading through some rules and had to go in a short amount of time so Lisa and I sat down and played about half a game of Hacienda. He’d received a copy of the game as a freebie from the Buckeye Game Fest but hadn’t had a chance to crack the shrink yet. 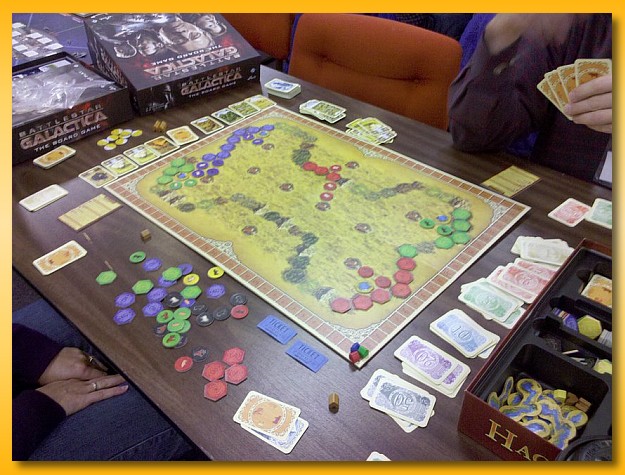 After Hacienda, Lisa and I moved over to another table and one of Lisa’s fellow preschool teachers who was there with her grandson joined us. Wanting to play something light and easy to teach I grabbed FITS from the game library and we sat down for a bit of Tetris-like play. 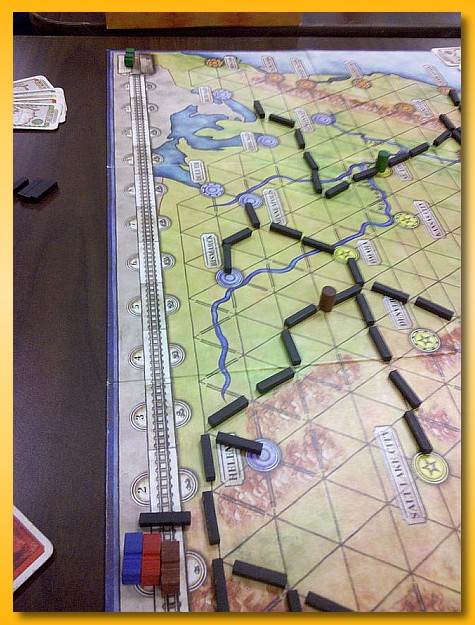 Keeping in the same light theme, I taught Lisa’s coworker and another player TransAmerica. As you can tell from the image above Lisa never left the engine house and blew as all away as we all tied for the “losing” spot past the “end of the line”. 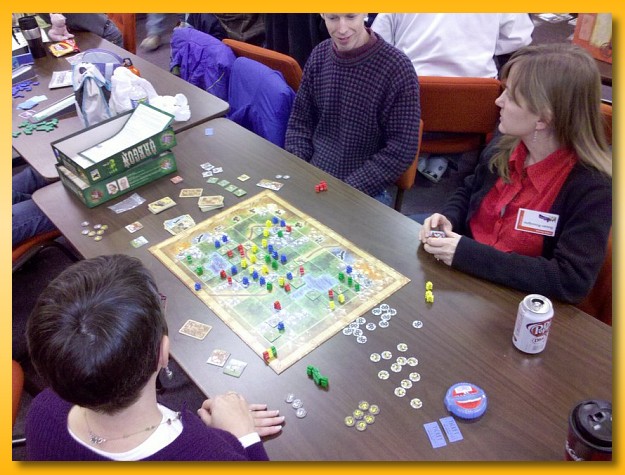 Next up, I taught everyone Oregon, a light tile laying game. It’s not all that difficult to learn but after you’ve played a few games you get a sense of the value of different items like gold mines, chaining extra turns, jokers, and group scoring. I won but that’s not saying much given that it was pretty new for everyone else. Oregon may look like a lot is going on but it is a relatively simple game.

To close the night, we played Dominion and as usual, Lisa won. The witch and spy were very active and Lisa’s was getting lucky pairing up her Throne Room with the witch making many of us grab two curses every time (I ended up with 8 by game end). I had moats, and chapels trying to shed cards but could never capitalize on getting rid of anything.

As I was talking to a few people, Lisa played a couple of quick games of Quoridor with her coworker’s son. I had a great time and greatly appreciate the effort CABS puts into these special days. I even walked away with an in-shrink copy of Amyitis I won in a free raffle. I’d like to say we should make it a regular after Thanksgiving family event but I think we’ll play it by ear. Our kids were glad to be at home (do we have to go!!!!) so maybe it’ll be just something Lisa and I do….but I can easily live with that.