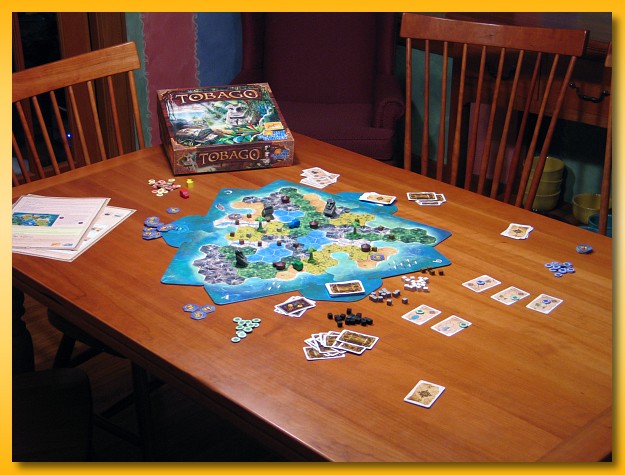 After playing three games of Tobago at Great Lakes Games, I immediately put it on my wishlist. I couldn’t wait for Christmas so I ordered a copy using my gift certificate along with Long Shot figuring while a box is getting shipped I might as well put another game in it 🙂

Tobago comes with a clever three-part, double-sided board that you can mix and match to vary the layout of the terrain tiles. Once chosen, little “clamps” lock in the pieces so they don’t shift during play. When constructed the board depicts various terrain types (i.e. mountain, beach, forest, stream, prairie, and lake) surrounded by ocean. The terrains are broken up with a hexagonal grid and various items are scattered on the grid during setup (i.e. huts, statues, and trees).

The game also comes equipped with two decks of cards (i.e. treasure and clue) and numerous cubes used to denote possible locations of treasures. Each player takes a set of “compass roses” (small cardboard chits), a small wooden truck, and a number of clue cards. Player are attempting to collect treasure cards that denote differing amounts of gold (victory points) and to do so they must determine the location of treasures.

When the first clue card is placed next to a stack of cubes beside the board, it establishes the initial locations of that color of treasure. Clue cards use iconography to indicate the location of the treasure (e.g. next to a tree, in a lake, in the mountains, not on the beach, …). Subsequent clue cards played for that color must restrict/narrow-down the location of the treasure and once the treasure locations are reduced to a single cube, the first player to drive his truck to the hex containing the cube can claim it.

Each time a clue card is placed, the player places one of his compass roses on the card and when the treasure is found (the finder gets an additional rose), treasure cards are pulled and a card drafting mechanism is used to payout the individual players that had roses on the cards. There is a little bit more to the payout mechanism than described but the gist of it is that if you invest more in finding the treasure (by placing cards), you’ll have more attempts at gathering gold during the payout. 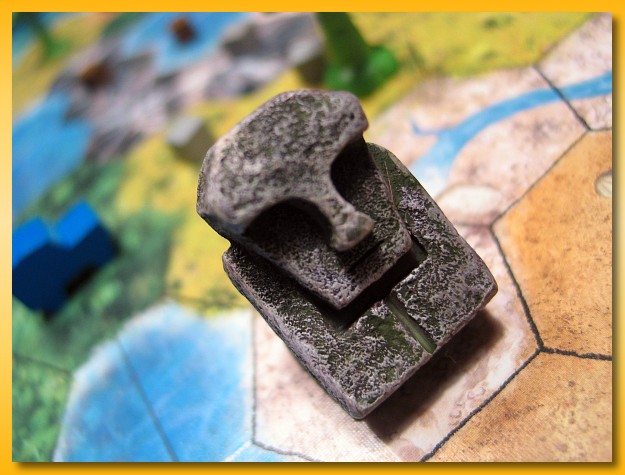 After a treasure if found, the statues produce an amulet (a cardboard chit) on the first beach hex touching the ocean if you draw a straight line from the eyes of the statue and follow the hexes. The statues then turn clockwise to face the next side of the hex. Amulets are collected to give players additional abilities that they would otherwise not have, like performing multiple actions on a turn, removing a cube of choice from the board, etc. Having lots of amulets is a good thing and one picks them up by driving ones truck to their position.

The game ends when the treasure card deck runs out and the player with the most gold wins. The game is relatively light but takes a bit of spatial skills to envision how the iconography of the cards reduces the location of any given treasure. There are times when cubes are not placed on the board because there are too many locations. When this occurs, it may take several clue cards to reduce the number down to a point where it’s worth putting cubes on the board. Until this time, you have to be able to mentally picture where the cubes would be by just looking at the progression of clue cards.

The production quality of the game is top notch. The statues are very over-produced but really make the game look great. They are a bit fiddly with making sure you have them pointing in the appropriate direction at all times (don’t bump the table). The trees are made of the same resin material as the statues and trucks and huts are wooden.

I greatly enjoyed playing and I’m glad I picked up a copy for playing with family and friends. If you get a chance to play it, let me know how it goes; I’d love to hear what you think of it.