I snuck in some time yesterday to attend a bonus, “adult-only/13+”, gaming night at CABS. It seemed like it was lightly attended but at CABS that means there may have been only 70 or so people (a standard CABS game night can draw 100+ people). I’d love to attend their after turkey day game-fest but we’ll have family over from Indiana and my time has been accounted for.

I took a few pictures with my new cell phone (Motorola Droid with the 5MP camera) but I’m not impressed with the results. It may be 5MP but the crappy optics make up the difference. I’m just too used to my trusty 5MP Canon G5. 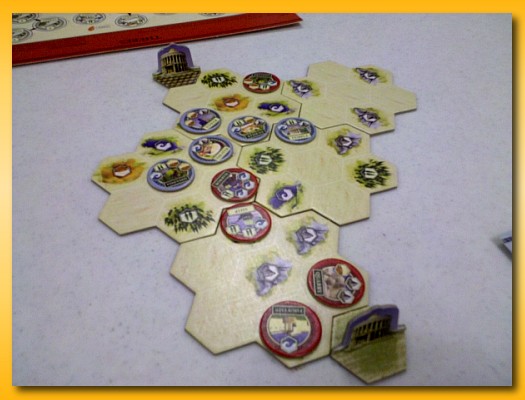 I’ve had Attika on my wishlist for a very long time but, I know…I know, I’ve never played it. Bob and I played it two-player (supposedly the best number to play it with) and it lives up to its reputation. It supports 2-4 players, however, I suspect that 4 would be a bit chaotic. Attika is a relatively simple tile laying game where a small number of landscape tiles form the beginning of the board and players build on top of them from their own personal sets of buildings (the colored disks). Players are attempting to be the first to build all their buildings or connect two of the raised buildings (temples?) in an unbroken chain of their own buildings.

The landscape tiles depict various types of terrains (empty, water, mountain, field, forest) and each building played has a requirement on the number of adjacent terrain types necessary to build the disk. If there are insufficient terrain types surrounding the building location, players can make up the difference by playing cards they’ve collected over the course of the game. Costs can also be reduced by building disks in a specific connected order. I really enjoyed the game and I’d be proud to have a copy in my collection. It might be a bit heady for Lisa but it would be worth the effort to location a copy. 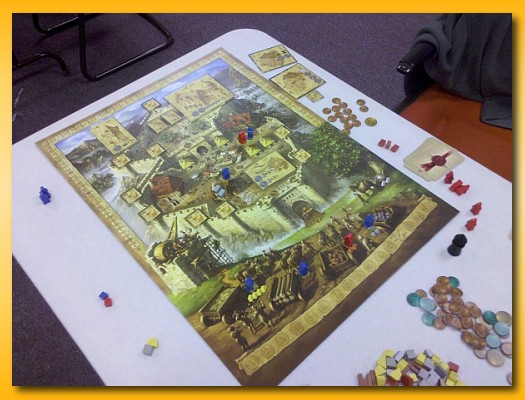 Our second game was A Castle for All Seasons. Bob had played before and owns a copy but I’d never tried it. It’s not that good for 2 but we gave it a shot. I’d agree…with two it’s a bit lame. I can tell the game could be quite good with more but there’s just not enough interesting interactions going on. It felt like we’d only just got started when the game was over.

Castle features the simultaneous role selection mechanism from identical decks like Mission Red Planet coupled with some Stone Age worker placement/resource gathering mechanisms. Throw in a touch of short game and end game scoring strategies and you’ve got a 60 minute game that would be good ender for a game night. There’s not a lot of heady stuff going on but the simultaneous drawing of cards steps up the meta-gaming a notch trying to outguess your opponents in playing some cards.

Bob and I finished out the night with a quick “standard” game of Dominion. Bob grabbed a thief but never was able to capitalize on it. My Throne Room and my Workshop kept coming up together in the same hand and there were several turns where I was able to pull in 3 silvers. By midgame I had an unbeatably stacked deck of money that allowed me to churn through the purchase of victory points to end the game in short order. 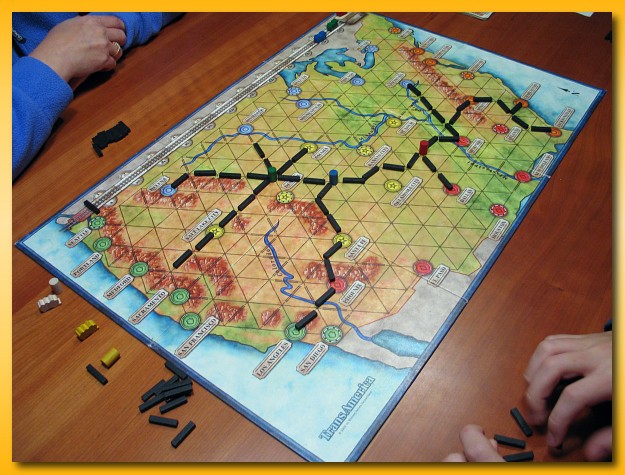 I stood around the library cabinets for quite a while trying to decide what to check out. I thought long and hard about Attika but I instead opted for an oldie but a goodie basic family game TransAmerica. Noah, Lisa, and I played it two times back to back and I’d be surprised if we spent 45 minutes total playing both games. About half way through the first game we realized we’d been scoring the missing double track links incorrectly but after that game Lisa called for an immediate replaying and as luck would have it, Noah won again!

TransAmerica is a fun little, light, game of randomly drawing 5 differently colored cards that name cities spread out across the United States. You job is to be the first to build track to connect all of your cities. You can only build track on the line that can be traced back to your starting pawn so eventually players merge lines to take advantage of other players expanding their networks into areas that get them closer to their goals. Most rounds ended with people only needing one or two links to complete their 5 cities but we did have some killer rounds where we were a long way off.

It’s a fun little game…probably not something I’d keep in my collection but it’s a nice change of pace to get the family playing a game together.