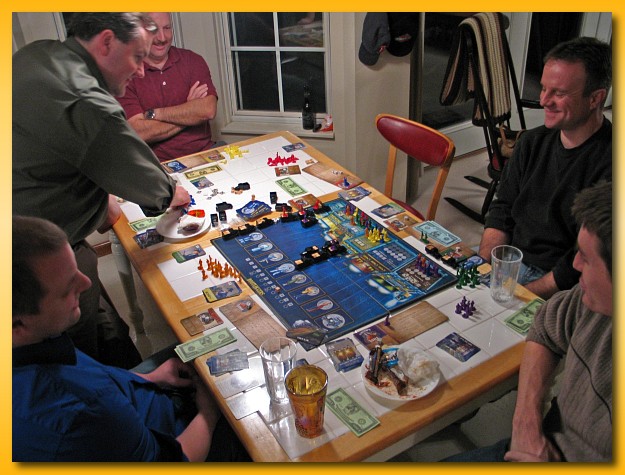 We met at Keith’s house this month for the November, 2009 installment of Analog Game Night. We thought we’d have 7 which usually causes us to break up into two tables but a last minute “can’t make it” brought us down to 6. I was a bit worried that I’d only brought a few good 3-5 player games but Jared bailed us out by bringing Bootleggers and Bob was backing up with TransAmerica as was Keith with I’m the Boss and King of the Elves.

We decided to give Bootleggers a go since we’d not played that before and I was pleasantly surprised. It took us about 4 hours to play given rule reading and our normal methodical pace but I was surprised at how fast it went.

Each player acts in the role of a mob boss managing the production stills that generate crates of hooch. To sell your hooch you need to invest in different sized trucks to ship them to the speakeasies that are open for buying. Players also vie for the controlling interest in the speakeasies by placing influence “gangsters”. There is a pecking order as to who’s trucks of crates will sell before others and the speakeasy doesn’t necessarily buy all that’s for sale. Crates of hooch that sell grant the seller cash as well as bonuses paid out to the majority stakeholder in the speakeasy.

Players vie for turn order by simultaneously placing a uniquely numbered card. Higher numbered cards go before lower numbered cards but the higher the number the more you pay to play the card. Going early gives players dibs on the numerous “action” cards that are on display each round as well as a “buy a new truck” card. The “action” cards come in several flavors but in general they’re good for you (e.g. get a new hidden still in the woods, roll more dice for hooch production, get a “gangster” for placement into a speakeasy, etc.) or a “thug” card which is usually used to attack or modify the rules of engagement (e.g. place a hit on a rival gangster, steal an empty truck, take majority control of a speakeasy for a round, etc.) The game also features a negotiation phase where players can attempt to rid themselves of crates the can’t or are choosing not to load onto their trucks. Players are free to negotiate whatever terms for the transaction but there’s no guarantee that the players stick to the agreed deal. They are gangsters…if you remember and stabbing each other in the back is, well, part of the territory.

The game is relatively random and there are a lot of opportunities to screw your neighbor but that’s the game and with the right crowd it’s fun to play the role of putting the hit on other mob families. I knew I was in a losing battle for dominance in any speakeasies so I went for the all out production route and bought a large fleet of trucks and had lots of production capability usually producing 12-15 crates of hooch every turn. In the end, my sales were just driving up the bonus points for others and I couldn’t keep up and come in near the end of the pack.

Bootleggers is a fun game if you’re in the mood for some gansta-fun. The game has some great production qualities with the nice plastic trucks and gangsters. Copies of the game are currently inexpensive and relatively easy to find.