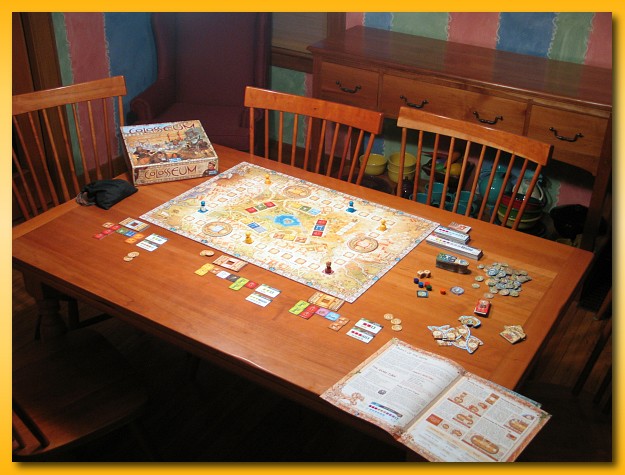 About two weeks ago I bid on a copy of Colosseum in an “anything goes” auction. I bid an amount of money that I suspected would not be enough but I figured I would test the waters. As I expected, I was quickly outbid by others offering comic books, DVDs, electronic games, etc. The winning bid was a board gaming friend of mine, Tim Thorp (berserkley) with a bid of:

Tim occasionally comments on items here on Marquand.net and I feel like I’ve gotten to know him relatively well and I was happy to see that he won the bid. Not long after the auction closed, I received an email from him asking for my home address. As crazy as it sounds, he was wanting to send the game to me as an early Christmas present for the Marquand household. I was speechless! I’m extremely grateful for the gesture and it’s difficult to find the words to express my gratitude. Tim, I thank you and my family thanks you for your extreme generosity. There’s hardly a day goes by that I’m not amazed by the generosity and kindness shown by those on Boardgame Geek. What a fantastic group to be a part of.

Late Saturday night, we’d gotten home from a trip to Indiana and there, waiting for me on the front porch, was the game. After some yard work and clean up around the house today, plus packing away Valdora still set up on the dining room table, I couldn’t wait to set up Colosseum and start reading through the rules. Unfortunately, we’ve got some things going on tomorrow that will keep me from playing any test rounds tonight and I’ll have to pack it away before bed. But you can rest assured it’s coming out tomorring so that I can get the rules down for the upcoming Buckeye Game Fest later this week.

Thanks again Tim and remember, Santa’s sleigh travels in both directions…