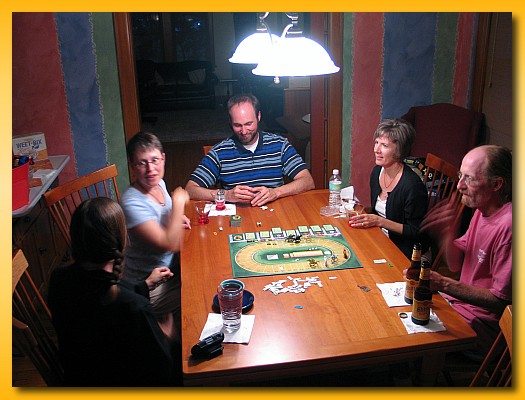 The summer months are a scheduling nightmare but we managed to collected a small group this month for some light gaming and socialization. A few weeks ago I was talking with some friends at one of Noah’s baseball games and they recounted a recent trip to the horse track during a company outing and that got me thinking about Winner’s Circle. So last night, when I knew that same couple was coming I pulled out the game and we set it up for three races. 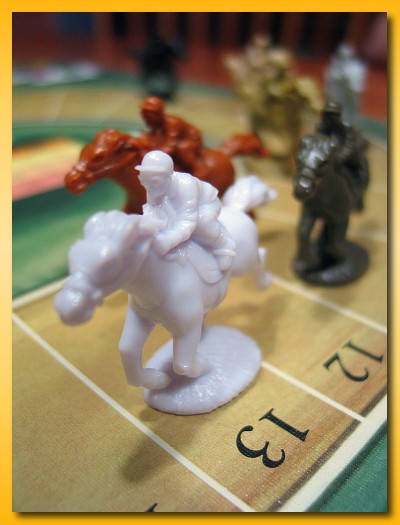 I’ve written about Winner’s Circle in the past but you set up 7 horses with varying capabilities, each player places bets, and then you take turns moving the horses around the track using offensive and defensive moves in an attempt to move the horses you’ve bet on closer to the finish line. The top three horses pay out on bets and the player with the most money at the end wins. Each horse must attempt to move once each round and how much it moves is dependent on the statistics card flipped up for the horse in addition to the position of other horses on the track. The card describes how well the horse moves in 4 different categories. It sounds a bit more complicated than it really is. I usually do relatively poorly and it showed again last night. It’s a good thing I don’t go to the real track!

One couple left early so the remaining four of us talked for a bit over three games of Sushizok im Gockelwok. Sushi is proving to be a big hit with everyone I’ve introduced it to. Small, very easy to play, and very quick. We knocked out three games in about 35 minutes.

Everyone, thanks for coming and we’ll be here next month as usual.