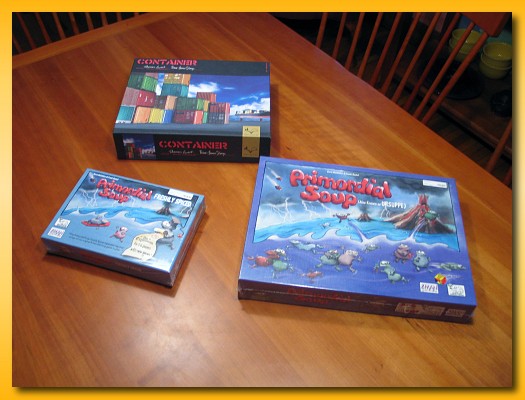 Jared found a “garage sale” of games on BGG and wanted to take a road trip to Cincinnati to buy 6 or 7 of them. He offered to pick up games for others in our group and when all was said and done, I think he bought a dozen games. I managed to pick up Primordial Soup and the Freshly Spiced expansion for 5-6 players and Container. Both Primordial Soup and the expansion are still in shrink and the cards in Container are still in shrink so all three are basically new games. The whole lot only set me back $55 so I was pretty happy about that.

Primordial Soup pits players controlling amoebas against one another in a struggle of life. Amoebas need to gain genetic advancements to outwit other players in their quest for life in the Primordial Soup. The games contains an often joked feature of requiring amoebas to eat the ejected poo of other amoebas during the game. Of course, you can only eat the other amoebas poo ’cause eating your own is…well that’s just nasty.

Container is a game of determining what to produce and what products to ship to maximize profits. The game contains some pretty cool looking container ships and some cool shipping containers to load onto them.