We met at my house for the July 2009 installment of Analog Game Night. I thought it was going to be a light turnout since three relatively regular members couldn’t make it but we ended up with 8 including a new person I’d invited from work, welcome Chris! Chris is an annual GenCon attendee but hadn’t found a group to play with here in Columbus and had fallen out of the habit of playing on a regular basis so hopefully we can change that. 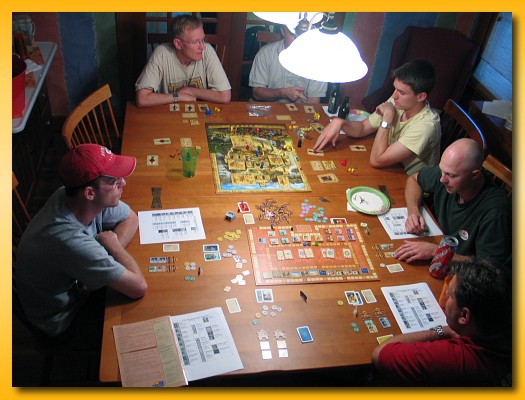 Since I didn’t get a chance to play “Castle” I can’t really comment on the game but it did look interesting. Man those building are some pretty healthy sized chunks of cardboard! “Dragon” can be a ruthless game and our random event setup was brutal. Most events were coming up in pairs and since that’s not allowed they were only separated by one tile with a layout like Contagion, Drought, Contagion, Drought, … Unfortunately, I’d been rushed into boning up on the rules the night before and missed a couple highly significant rules: 1) if you pass taking and action you can replenish your money up to 3 yuan (holy cow that hurt several of us) and 2) you must return half of your fireworks to the general supply after the festival event.

I like “Dragon” a lot but I play it poorly. It seems I’ve been saying that a lot recently and I’m starting to wonder if my aged brain is starting to lose its edge. Even though I seem to be running in a major slump I’m still having a lot of fun with the hobby and can’t wait for my next game. 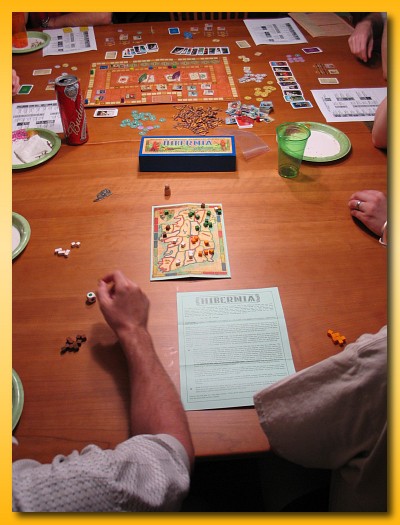 After Castle, the far end played Hibernia a game I received as a review copy. I was very grateful for their efforts and it provided a unique opportunity to get lots of feedback on what it’s like to play the game cold given that none of them had any idea what the game was about. I’m still gathering feedback and would like to get some more plays in myself and hope to post a full review soon.

My end of the table was still dragging through Dragon but after Hibernia finished we lost two players and the six of us played For Sale. A light but fun filler/closer. After For Sale, we lost two more players so I cracked open my new copy of Sushizock im Gockelwok and the remaining 4 of us played that.

I’d jumped on Bob’s order from Game Surplus and, lucky for me, it had arrive just in time for game night. So Bob brought over my new copy of Sushizock im Gockelwok and a copy of Antike…gotta love that rondel! 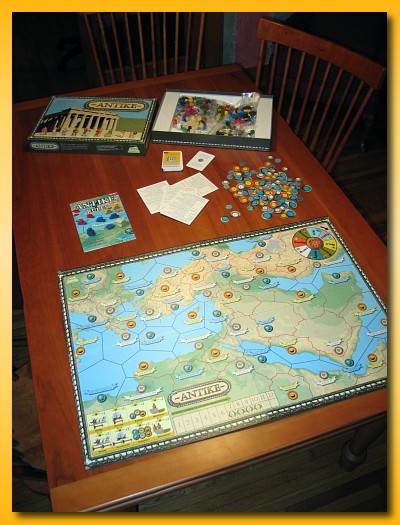 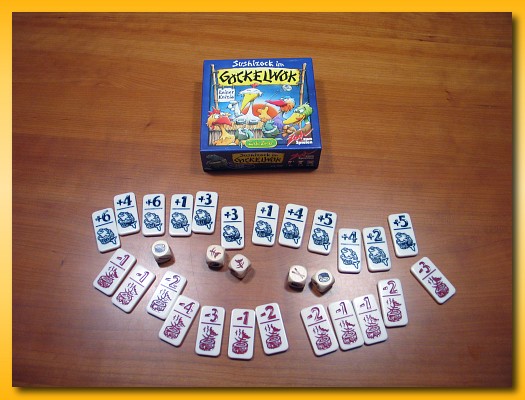 Thanks guys for coming; great turnout!