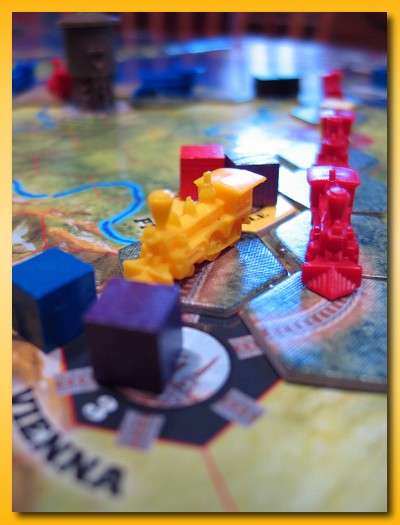 I received my copy of Rails of Europe about 5 months ago and I have yet to play it. So I cracked the box last night and reread the Railroad Tycoon rules (the base game that Rails expands) and set up for a solitaire game. It didn’t take long before I realized that there’s just too much going on to keep track of independent players to make it really a game. However, I did enjoy being able to work through the rules and, embarrassingly enough, fondle the bits. I’ll not go through the rules but in short, Rails is a good delivery game. Your job is to connect cities by building railroads between them. Once connected you can ship cubes between cities using the rail lines. Different terrain types affect the cost of the track and colored cubes must be shipped from their original location established at the beginning of the game to a city of corresponding color. You move up the victory point track when you ship cubes which earns you more money each turn. You’ll most likely need to sell shares in your company to raise cash to build rail lines but doing so forces you to pay dividends each turn reducing the cash you have available on your turn. If you’ve played Ticket to Ride or Union Pacific, you might think this games are similar because there are plastic trains and you “build track” but the similarity is only superficial. Rails is much more of a “gamer’s game” and there are many more goals to think about, money to manage, and decisions to make about where to build. The smaller board brings players into contact much sooner than RT setting the stage for a potentially more challenging and confrontation game. 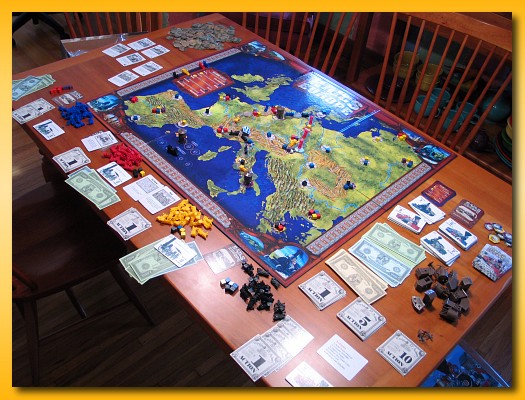 The board is 2/3 the size of Railroad Tycoon and I thought I’d be fine playing without my dining room table opened up but, unfortunately, it’s very tight even with the smaller size. I beginning to think the only way I’m going to get a set of very specific games to the table will be to organize a special game night with the games already chosen.