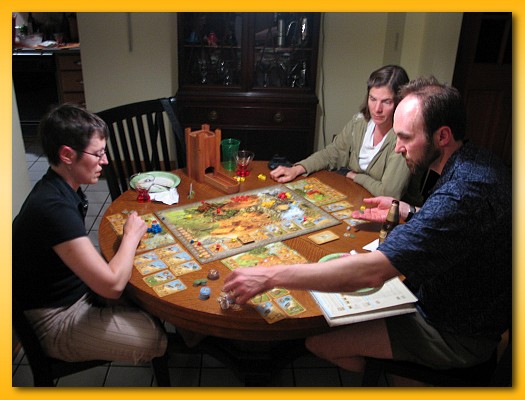 Last night, Lisa and I held the second installment of Saturday Night Gamers – SNG. Our first attempt was mostly a trial run with couples and we’ve made a few changes this time, broadened the guest list a bit, and announced that it will be a monthly activity for us. We know that everyone has busy schedules and ad hoc game nights just don’t work in our crowd. It’s got to be something that people can schedule. But we also know that not everyone can come every month and we know that sometimes it may just be Lisa and I but we’re fine with that.

Our first monthly SNG (again packed with food, wine, and beer – I’ve got to get Lisa to back off on the food!) was a tough one to schedule for many. With the summer months coming people are just darned busy. But, we did manage to have seven total which is a comfortable number for playing two games. We split into two groups and I taught Saint Petersburg to three others and the other group played Stone Age. I’m still struggling a bit with the format but I think we’ll get there eventually. We spend a relatively large amount of time just chit chatting, eating, etc. and the gamer in me wants to get down to business but the logic side of my brain knows that relaxing with friends is just as rewarding. We’d like to keep it a gaming event but not in a way that’s tense or competitive. Sort of a gathering that happens to include a game or two.

I’m also struggling a bit with choosing games to play. Many of the attendees are not gamers but we do have a few people capable of teaching a smattering of games. Last night I pulled out a stack of 8 or 10 games that I thought were appropriate in terms of time and level of difficulty but deciding which games to actually setup and play is difficult. I don’t like to dictate the games since I’ll play most anything but without strong desire for any particular game I guess I’ll have to get comfortable playing that role. I felt a lot of pressure to teach the games to get people up and playing quickly since learning a game cold from the rules is a drag for most people (unless you’re weird like me and enjoy learning a new game by yourself with a pot of coffee handy). I think next time I’ll grab a game or two I’d like to teach/play, hold them up, ask for players, and let another group splinter off and pick for themselves. Everyone may be happier with that approach. Time will tell.

Unfortunately I forgot about taking pictures until around 10pm after my group was done with Saint Petersburg and a round of Lexio but I did manage to get one of the group playing Stone Age. I think everyone had a good time and we hope to see you all next month if you can squeeze us in.