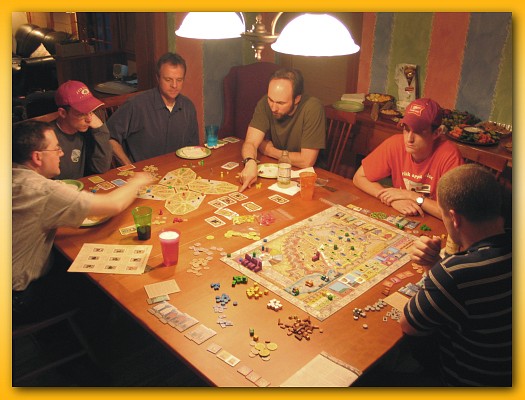 Pardon my crappy pictures this month. My camera was on a manual setting that had the wrong lighting type for the room casting everyone in a horrific orange glow. I did my best in Paintshop Pro.

Seven of us met at my house for May’s installment of Analog Game Night. After burying ourselves in food and drinks we perused the game shelf and pulled out Notre Dame and Hamburgum. Notre Dame is listed as 75 minutes as is Hamburgum but given that Hamburgum was new to our group we split into 4 for ND and 3 for Hamburgum in hopes of having them end roughly at the same time.

Unfortunately, the four playing ND had a long haul through the rules (it had been a few years for most of them) and my end of the table finished with time to spare. While waiting we played five rounds of Lexio.

After Notre Dame finished up, we lost a couple players and with five we pulled out Ra. I’ve played Ra enough that I can teach it without consulting the rules (I do need the rules for the starting sun configurations). The game was rather strange in that the auction track was really filling up but people were really hesitant to call for the auction. In that situation it’s painful to watch beautiful melds of tiles going to the highest bidder when you have no hope of winning. I was calling Ra every chance I could get but there were times when I needed floods or I didn’t want to swap a high sun for a crappy tile for the next round and round and round it went with nobody calling Ra. During one particularly sweet moment with three of us left with suns the Ra track had only two openings. I had the highest sun so when the next to last Ra tile was pulled I took the tiles and the next tile was the last Ra leaving two other players in the dirt. Unfortunately that was the highest point of my game ending the game near the end of the pack. 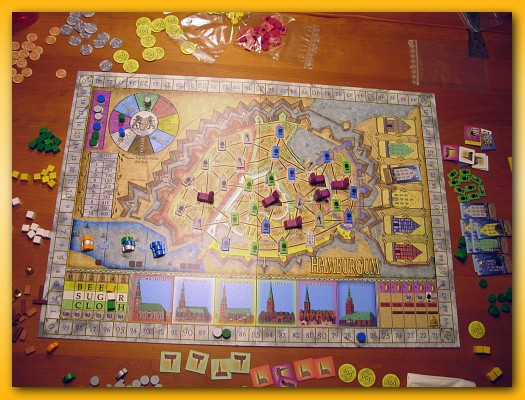 I enjoyed Hamburgum quite a bit even though I came in a distant third. The rondel provides some tension but I was somewhat disappointed in the level of tension in the game. I had hoped for more…somewhat akin to Tigris and Euphrates. I do like that there is no random element in the game and that, for the most part, play is extremely swift. Once you decide what it is you want to do, you can quickly take your turn and before you know it, it’s your move again. I built the first church so became the first player with the freedom to build where I want but in the end it didn’t matter much. I wasn’t paying much attention to what regions I was building in and was focussing on maximizing certain buildings to coincide with a building multiplier I’d gotten from a church donation. In the end, however, my multiplier didn’t pay off and by that time my scattered building chips were relatively worthless for the “people” multipliers for the different regions. I’d really like to play a couple of games back-to-back to let some of the strategies sink in. If you’re good…the picture above shows a mistake we made and recognized late in the game. We had another rules slip as well (allowing people to buy more than one special building during a turn – I’d forgotten about that limitation) but I don’t think either infraction affected the game.

I’ve been playing simultaneous games of T&E on BGG and the strategies there are not subtle. There are some relatively sneaky moves but for the most part, moves are dramatic. I’m surmising that Hamburgum is a more subtle game, and my hopes are that my somewhat depressed enjoyment level is inappropriate given a few more plays.

Thanks for coming guys and I’m looking forward to next time.