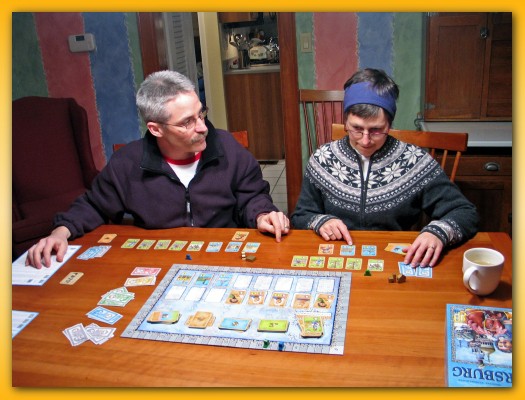 Said simply…I can’t win against my wife. We’re talking utter dismemberment, a husk of what was once a thoughtful opponent, a mere crack in the road on her path to victory. I don’t know what it is but after playing numerous games for two it’s not even close. I’m not going to stop banging my head against the wall, mind you, but for all that’s sacred in the universe what in the wide wide world of sports is going on here?!

Now, don’t get me wrong. I’m not surprised that she’s winning. Or more accurately, my overall board gaming win/loss ratio is not so superior that I’d presume to win even more than half the games. Maybe this is just her game to get. She’s probably just that good! But the frequency and the distance between her score and mine are just so mind boggling that I’ve got to be missing some essential vitamin, some nugget of insight, some protein in my genetic makeup.

But when I step back, calm down, and take a closer look, I realize that this is an example of what makes playing board games so worthwhile. Saint Pete’s player aids, strategy articles, session reports, etc. are all readily available but I refuse to look at them. To me, turning to strategy articles elevates winning and losing to a more significant pedestal than I want it to take. I want to figure it out by actually *gasp* playing the game. Taking 15 minutes to scan strategy articles for that key behavior is like looking for cheat codes for a video game or watching the end of a “whodunnit” movie before the beginning. I’m extracting my money out of this game through playing it, not from winning it or showing that I’ve ‘gotten’ it (or more accurately, someone ‘told me it’).

Saint Petersburg is a relatively simple set collection game. Designed in 2004 by Bernd Brunnhofer and Michael Tummelhofer (who, strangely enough, is thought to be a pseudonym representing three other prominent industry personalities), supports 2-4 players for about 45 minutes of play. At a high level you start the game with some money and you attempt to buy cards that grant you money and/or victory points every round. There is pressure to buy victory point cards early so that every round you’re advancing along the victory point track. But there is also pressure to buy cards that grant you money so that you have enough income every round to buy the really expensive cards that show up. Money is tight granting the efficient player the win. 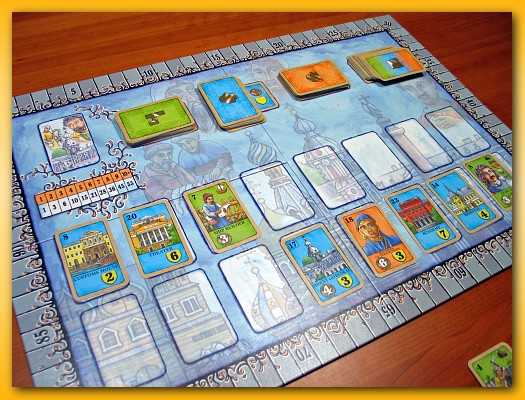 The board is composed of four stacks of cards (green, blue, orange, and multi-colored) across the top and two rows of eight slots for cards. The top row represents the ‘primary market’ and is filled with cards that have been exposed in the current round. The bottom row represents the ‘secondary market’ and is filled with cards that were exposed the immediately previous round. The cost of cards in the secondary market are discounted by one ruble. A maximum of eight cards at any one time will be exposed across both the primary and secondary markets during every round. All eight cards may be in the top row, all in the bottom row, or any combination across the two rows.

A round comprises four phases (one phase per deck of cards: green, blue, orange, and multi-colored) and green cards are dealt face-up into the primary market until a total of eight cards across both markets are exposed. Players alternate taking a single action until everybody passes. At this point, everybody scores the green cards they’ve collected since the beginning of the game (which usually grants each player money but there are cards that can grant victory points as well). The game then progresses to the “blue” phase. Like the green phase, blue cards are dealt face-up into the primary market until eight cards are exposed across both markets. Players again take turns taking actions until everyone passes. Players then score their collections of blue cards (usually granting victory points and at times money). The orange phase is played in a similar granting players money and victory points. The multi-colored phase is similar but there is no scoring round. Instead, these multi-colored cards act as upgrades to previously played cards making them “better” but players cannot reap the benefits of those upgrades until later phases when scoring the upgraded cards.

So what do players do on their turn? Players have the option of buying a card in the primary market for the price indicator in the upper left hand corner of the card, buying a card from the secondary market for one less than indicated on the card, pick up a card from either market and place it for free in their hand, place a card from you hand into your play area for the natural cost of the card, or pass. Passing does not disqualify you from taken an action if play gets back around to you in the same phase. You’re limited to a maximum of three cards in your hand and those will count -5 points each against you at the end of the game so holding onto cards you cannot pay to lay down can be risky near the end of the game. When placing a card, duplicate cards in you play area discount the card by 1 ruble so finding matches is beneficial since it’s cheaper to buy and play the card. 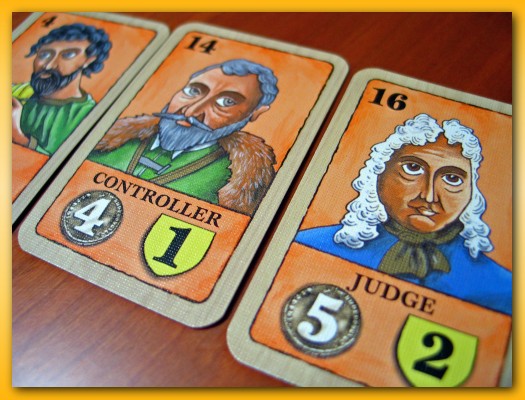 Saint Pete is a great, quick game. Sure it frustrates me but that’s what makes it fun. So here I sit wondering if I should download a standalone PC version so that I can play against bots to figure out for myself what works and what doesn’t. Sound like some fun and maybe I can locate my missing strategy vitamin.