We met at my house for the April 2009 installment of Analog Game Night. I think I’ve managed to convert at least three recent newcomers to the group to avid gamers and of those three, two have turned to the darkside and have started buying games. Some at a faster pace than even me!

Jared brought his copy of Oregon and we quickly got into the rules explanation. Oregon is one of those titles that I’ve got on my wishlist but I’ve just never pulled the trigger on it. I didn’t think quickly enough to get a picture of the game before it was back in the box so I hot-linked one from BGG.

Oregon rates a respectable 6.87 on BGG and supports 2-4 players for about 45 minutes of play. It’s a tile/meeple laying and card drafting game where players draft two different kinds of cards and then decide which type of action to take on their turn (building a building by placing a tile or placing a meeple). The cards you play from your hand dictate regions on the board where you’re allowed to play by indicating a row/column combination and placing tiles next to your meeples or meeples next to existing tiles gains you victory points. There are some additional rules allowing for a Joker and an Extra Turn that gives the brain a good twist in trying to determine how best and when to use them but in general you look at what cards are in your hand, where you’re allowed to play, and make the best play that grants you the most points.

The game is easy to learn but it may take a play or two to see how best to use the Joker and Extra Turn tiles effectively. Since victory points are earned every turn (hopefully) you really have to keep up with the leaders or you’ll find yourself trailing and struggling to catch up. Overall the game is a lightly themed abstract; it could have been pasted up with rabbits, drunken gnomes on a sinking submarine, superheroes, or differently colored marbles for that matter. There are few surprise moves to be made in the game and a particular good move is mostly derived from what you’ve drafted at the end of the previous turn.

I enjoyed the game and was glad to have played but the jury is still out in terms of making a purchase. It’s a quick filler given that there’s not an inordinate amount of brain power going into making your decision but because of that there’s not a lot of depth. I have numerous ‘light’ games for four so I can’t really see purchasing this one myself. 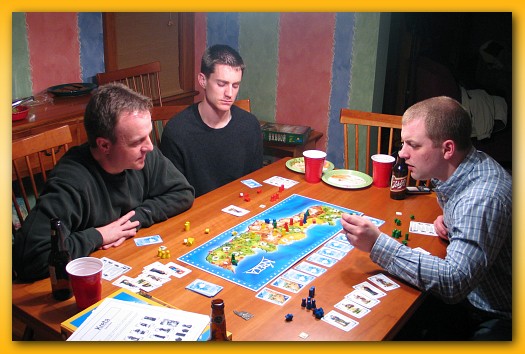 Next up was Kreta. It’s been a little over a year since I’d played so it’s a bit tough to get it to the table. I’ve described the game before but quickly, Kreta is a cross between Samurai and Mission: Red Planet. Players vie for the most influence points in areas depicted on a map. Influence is gained by placing and moving various tokens around the map. Which tokens you’re allowed to place/move on your turn is dictated by what card you play. Everybody starts the game with the same small deck of cards depicting various people (e.g. Commander, Admiral, Abbot, Builder, …) and during a turn you first lay down a card from your hand and it’s the card that dictates what action you can take (e.g. the Admiral lets you move your ship, the builder lets you build something, …) The trick is that once you’ve played a particular card, you’re not allowed to play that card again on subsequent turns. However, when someone plays the Castellan card a scoring event occurs and everybody gets all their cards back. There are 11 region cards along the edge of the board that indicate the 11 scoring rounds of the game as well as which intersection between regions will be scored on the next scoring round. Only two intersections are known in advance so players can plan where to position their tokens with limited future knowledge.

I like the game well enough but I do notice it feeling a bit more dry and less interesting than it did in the past. It’s a game that I do poorly at mostly because I continually find myself engaging in multiple dominance battles with different players that all seem to be more capable at defending their position. I usually end up spreading myself too thinly and end up losing all of them. I always feel like I’m playing catchup like that guy that runs around keeping the plates spinning on the little sticks. Last night the scoring cards were particularly brutal giving a couple of players multiple opportunities to score large almost back to back points greatly outpacing my feeble attempts at intelligent play.

There are variants of the game to try to mitigate this “double and triple quick” scoring but in the end it’s mostly because I’ve not prepared well for the possibility and that’s just the way the ball bounces. Winning these games we play is neither the genesis of fun nor is it indicative of intelligence or lack thereof. Instead, it’s the journey of exploring the games, exercising your mind, and continually trying to do those things you find difficult or frustrating so that you can be better.

I had a lot of fun guys. Thanks for coming and I look forward to the next game night.