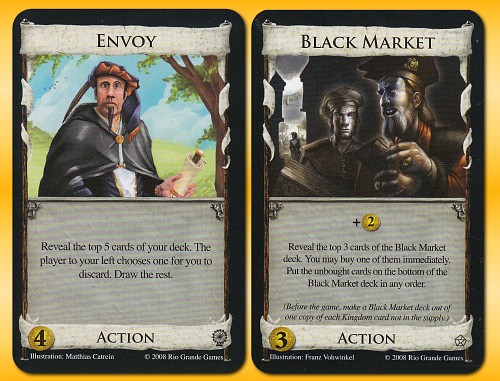 In February, when BGG offered the option to preorder two additional promo decks to one of my favorite games (Dominion), I jumped at the chance. For just a few bucks you could pick up both decks and they’re now sitting on my dining room table screaming to be played.

The Black Market card, when played as an action card forces the player to draw the next three cards from a “Black Market Deck” and then they have the option of buying one of the cards with any money they play and/or or have showing on previously played action cards. Any remaining money in hand or on Action cards goes towards the players “normal” buy in the hand.

Before the game, players agree on the composition of the “Black Market Deck” but the rules recommend one card from each of the 15 Kingdom cards that are not currently in play. This makes an interesting feature of allowing Kingdom cards that wouldn’t normally be in the game to make their way into the game. Neat stuff.

The Envoy, when played as an Action card forces the player to turn up 5 (!) cards from you draw deck and the player to your left chooses one for you to discard. You then put the remaining for in your hand for use during your turn.

Both card sound like they’ll introduce even more spice into an already really good game; looking forward to playing.